My apologies: WordPress prematurely published the draft of “Brothers from the same mothers: the Lanna and Burmese scripts.” I meant to publish this as a separate post because I realized my original post was too long.

Below is a more detailed commentary on the letters and characters found in the Lanna and Burmese alphabets, as well as an analysis of unique Lanna letters, which transcribe native Tai vocabulary (i.e., multiple tones, unique consonants like ‘f’ not found in Indic scripts, etc.).

The Central Thai alphabet clearly influenced the innovation of the Lanna script’s invented letters. Even today, both the Lanna and Central Thai alphabet have analogous ‘invented’ letters (including distinction between ‘high’ and ‘low’ toned letters for native Tai vocabulary), which are really just modifications of the original base letters found in the Indic alphabet inventory of the respective alphabets’ ancestral systems (Khmer for Central Thai, Mon for Lanna).These letters are not used when writing in Pali or Sanskrit.

In the comparison chart below, I’ve compared Lanna letters against the Central Thai alphabet’s 44 letters, using the traditional ordering scheme of the Burmese/Mon alphabets: 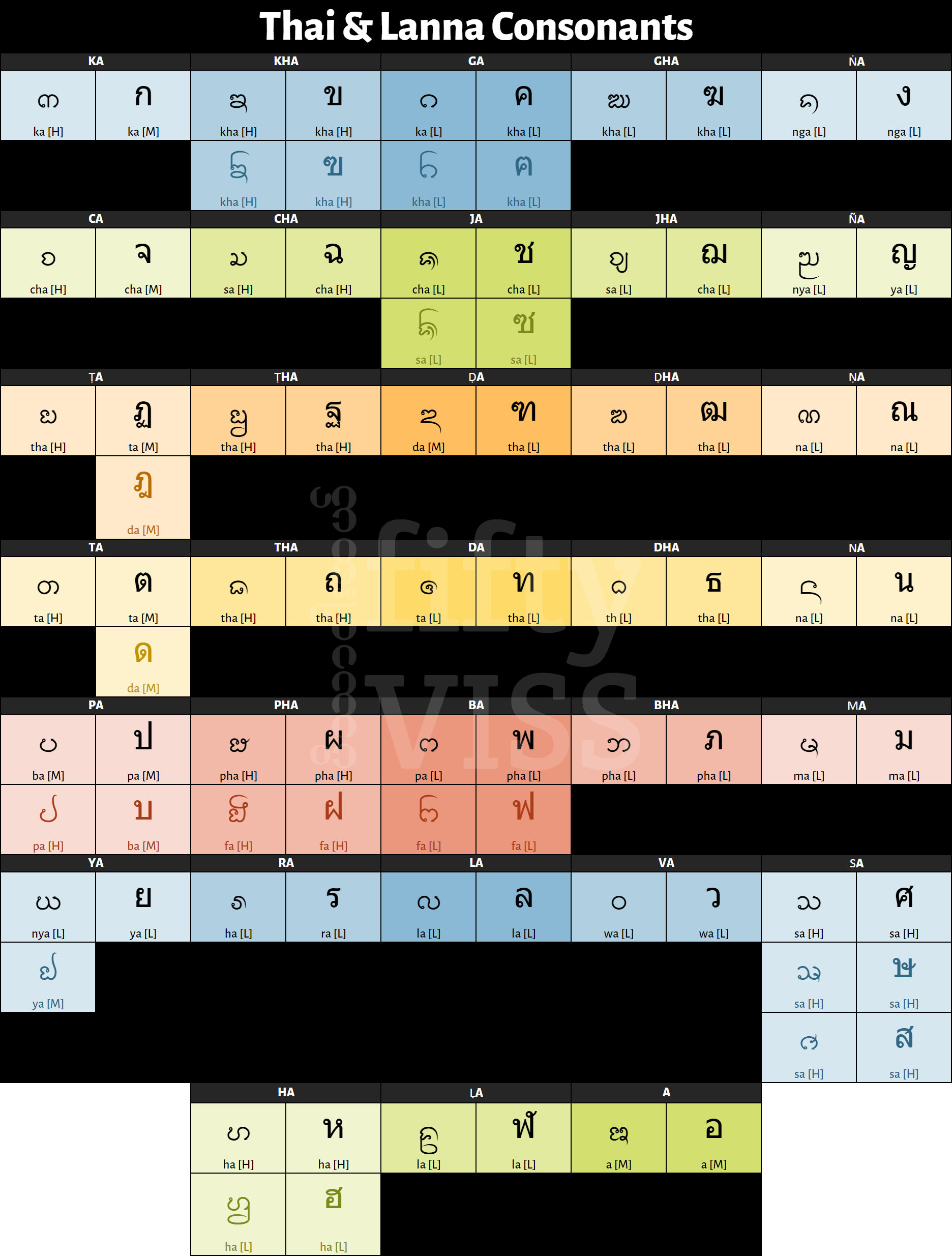 Tai Tham has 2 distinct sets of numerals, one common set called “hora” and another called “tham,” used for religious purposes. The “hora” set of numerals is commonly used in standard Lanna writing, and is practically identical to Burmese numerals: 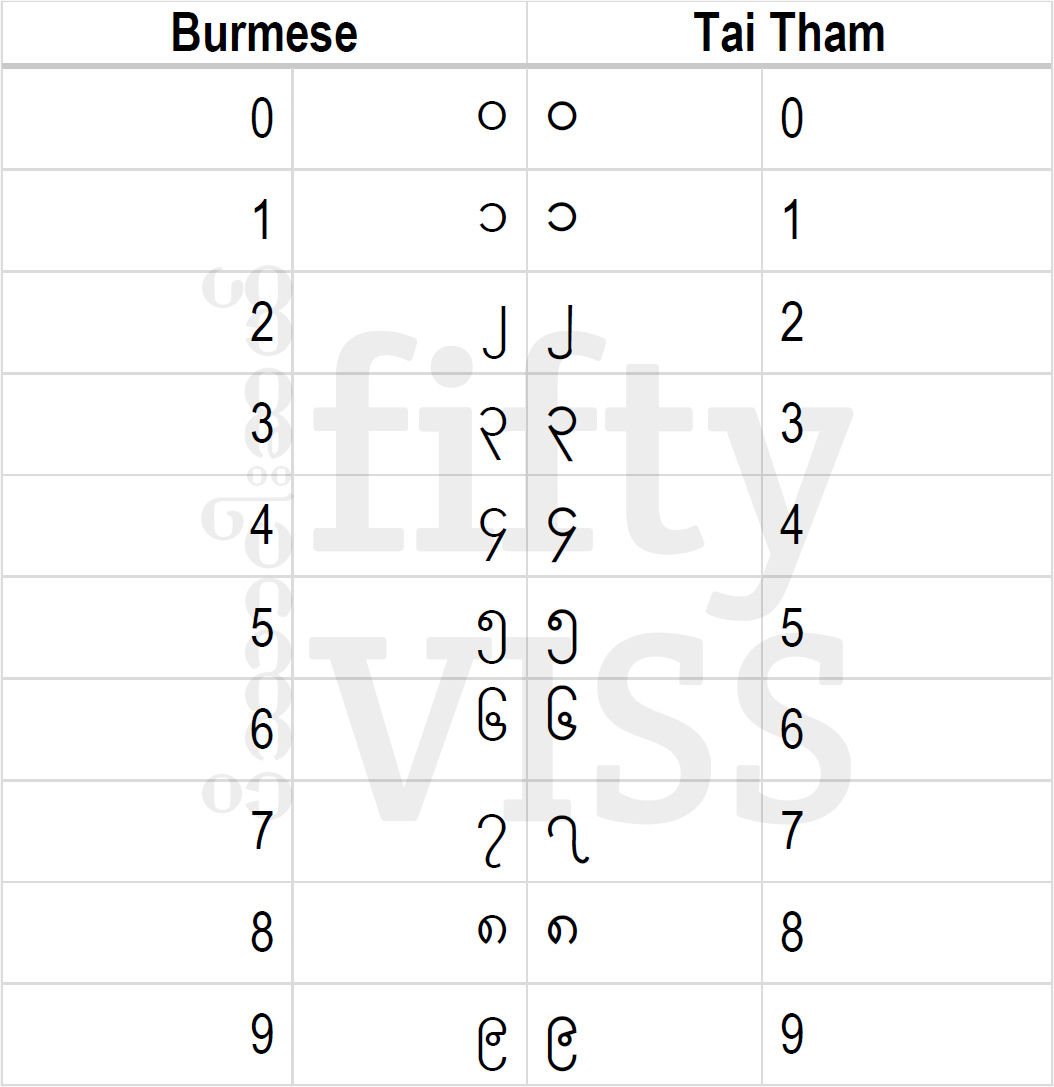 Numerals in Burmese and Lanna scripts

The “tham” set of numerals is used in religious scripture, and is clearly related to Lao and Thai numerals, as the comparison below shows: 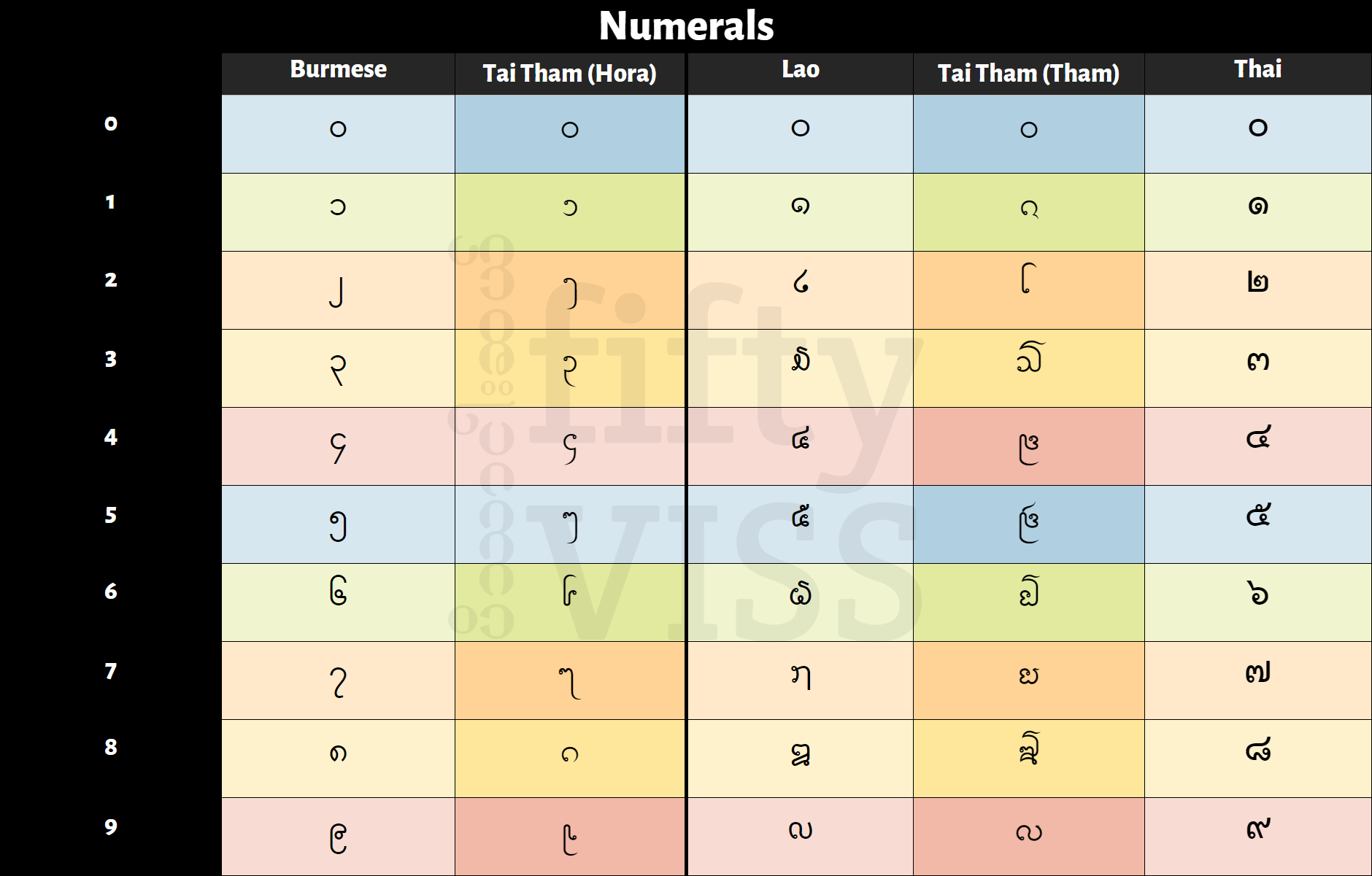 Note: You may not be able to view the Tai Tham/Lanna letters in the text. The Tai Tham font I’ve used is Lanna Alif (can be downloaded here), which removes the stylistic flourishes commonly found in Lanna writing. There’s also an interesting project to create a open source Tai Tham font, Hariphunchai at hariphunchai.unifont.org.

For the side by side comparison of Lanna and Burmese consonants, I’ve sorted using the systematic order for Brahmi scripts, whereby consonants are ordered in groups of 5 (vagga in Pali). For the letter names, I’ve used the names identified in the Unicode blocks. 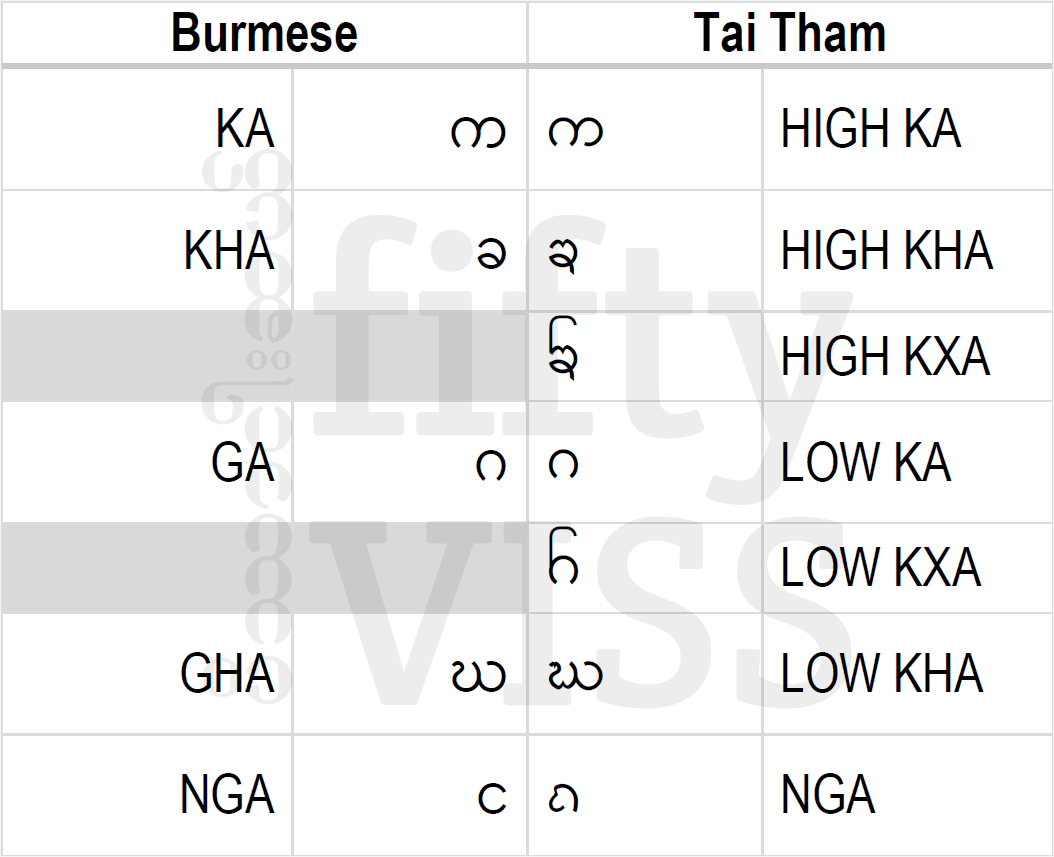 In the ‘ka’ group, the Lanna script has 2 innovated letters, the high “kxa” (ᨢ) and the low “kxa” (ᨤ), for native Tai words pronounced in the high and low tones (similar to the Central Thai alphabet). These letters are merely modified forms of the original letters, with hooks above the original letters. 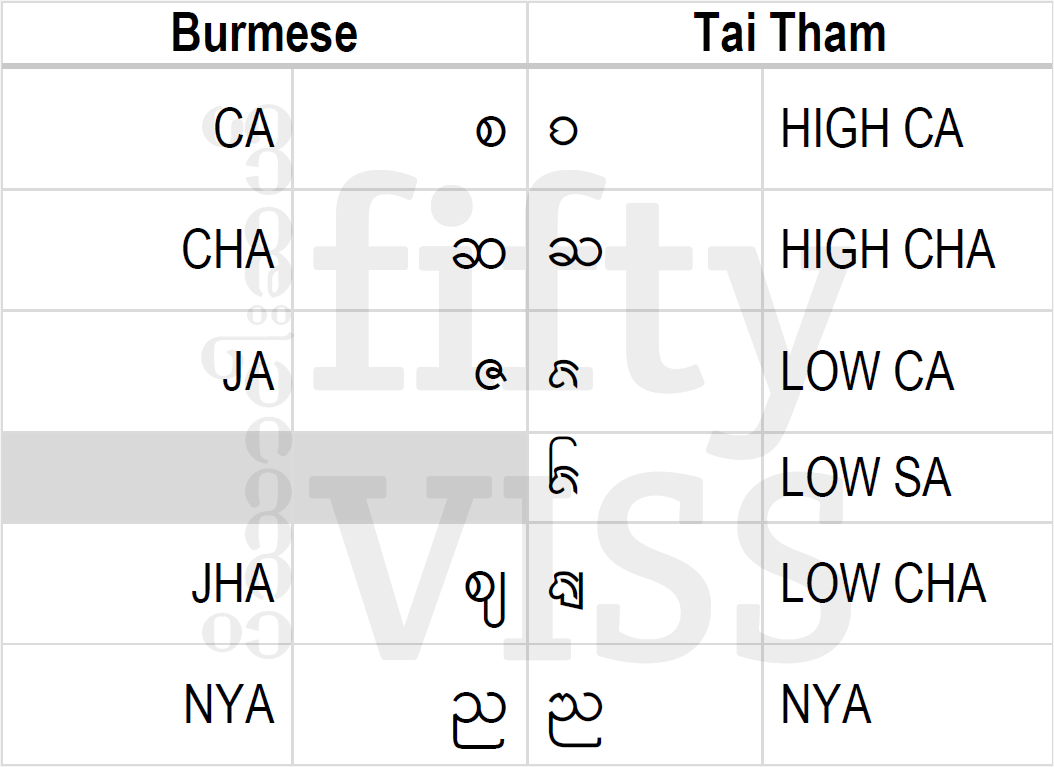 In the ‘ca’ group, the Lanna script has innovated one letter, a low ‘sa’ (ᨪ), for Tai words pronounced in the low tone. This is a modified form of the low ‘ca’ letter above. 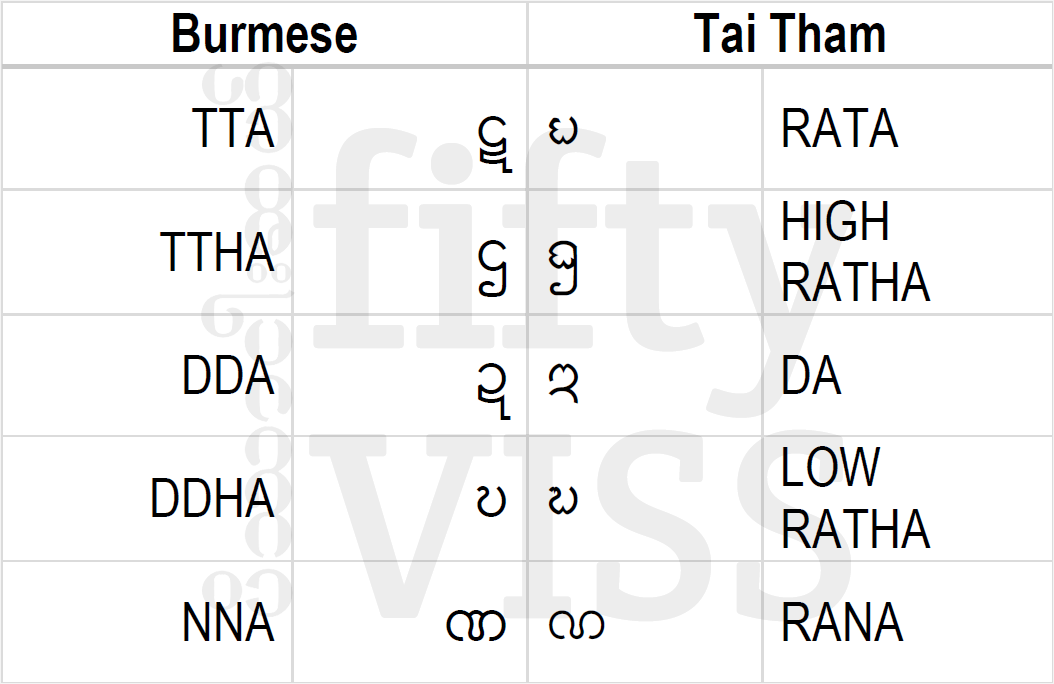 In the ‘ta’ group, the original set of 5 letters is shared in both languages. The ‘ṭa’ group of consonants is typically only used for words of Indic origin (e.g., Pali and Sanskrit) in both Lanna and Burmese. 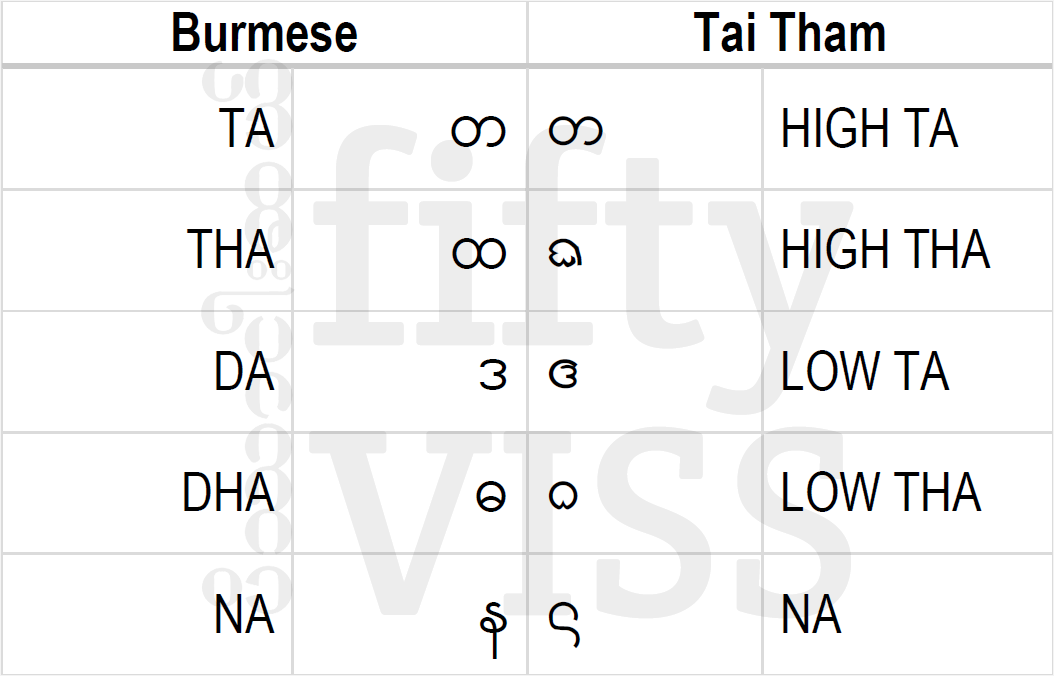 In the ‘ta’ group, the original set of 5 letters is shared in both languages. 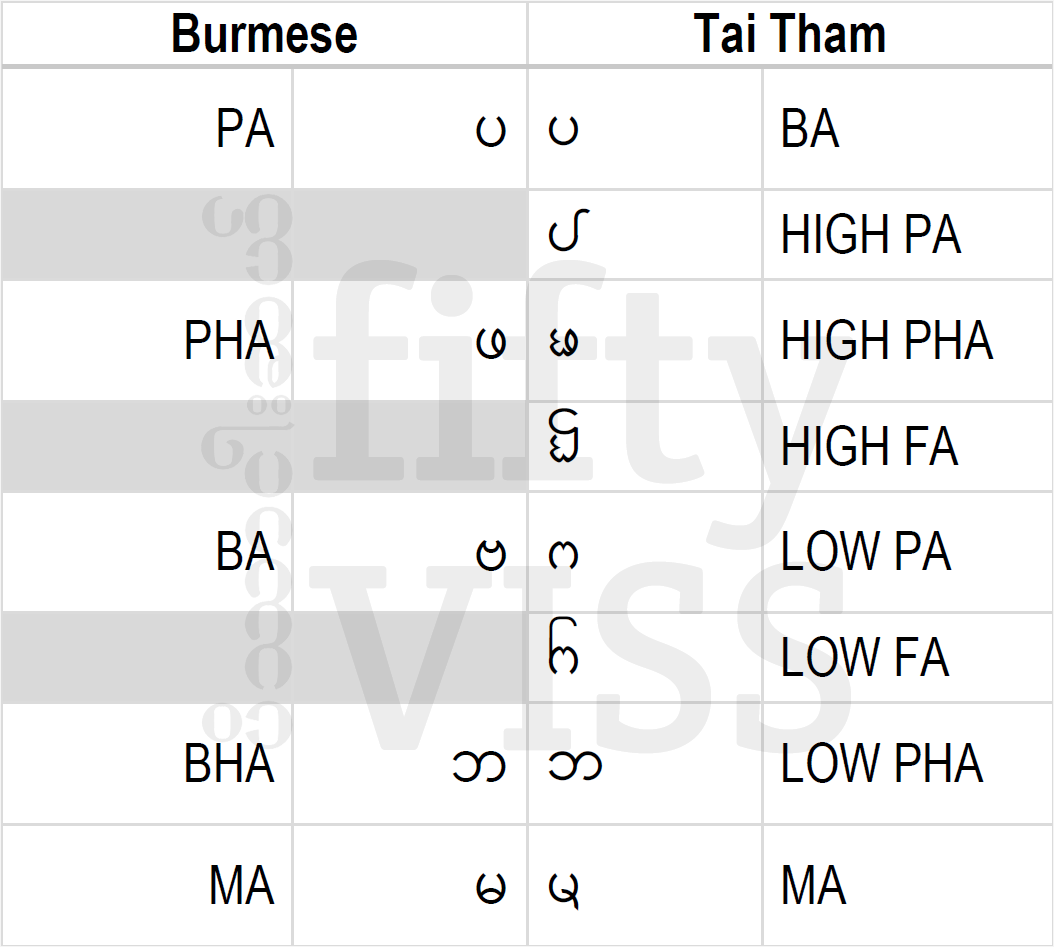 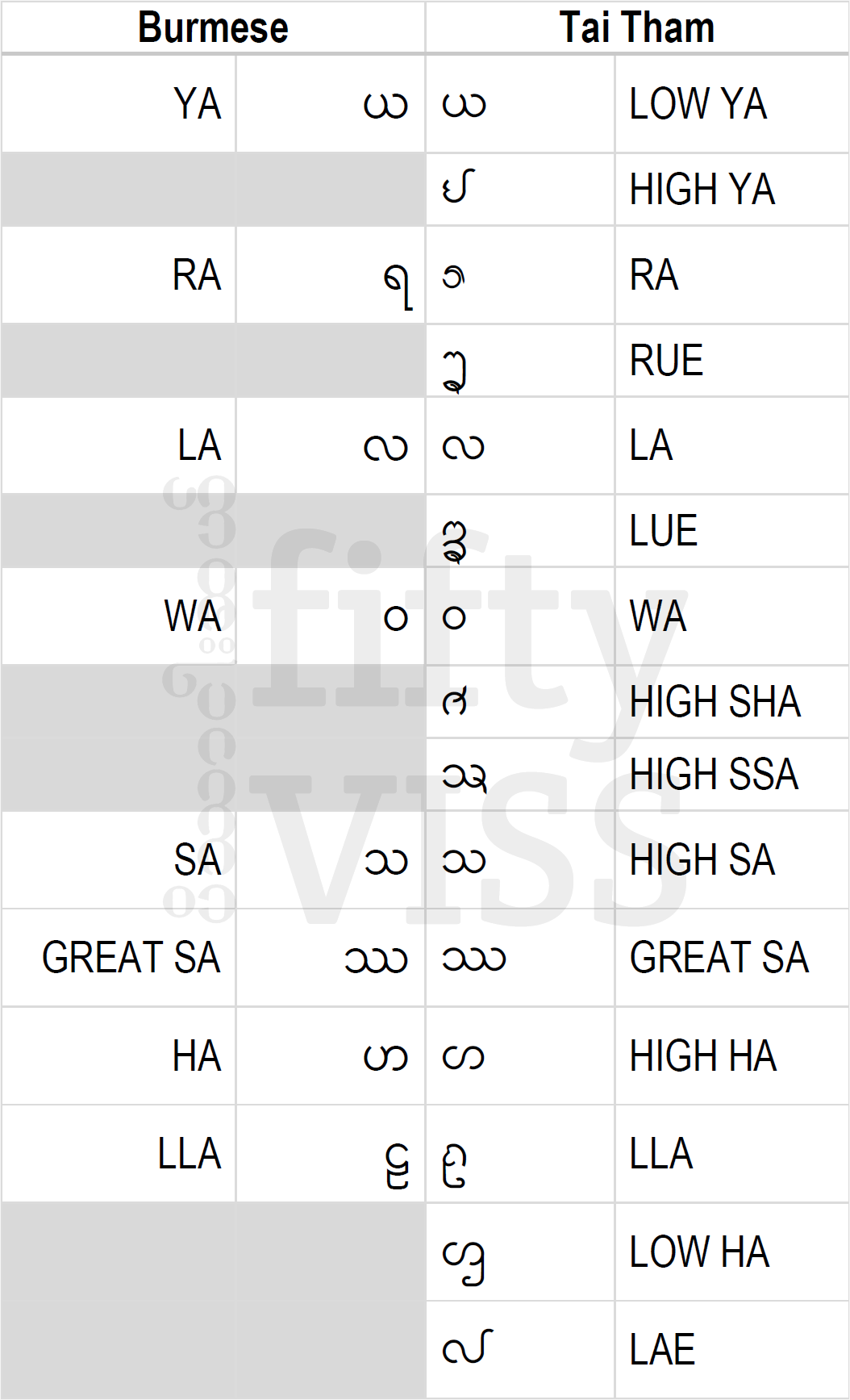 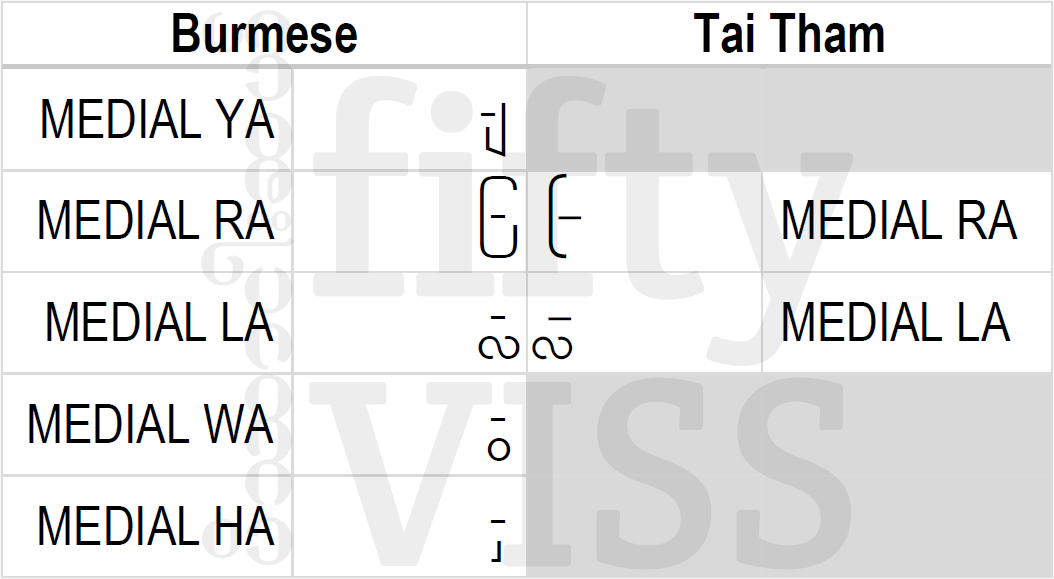 Medials in Burmese and Lanna scripts 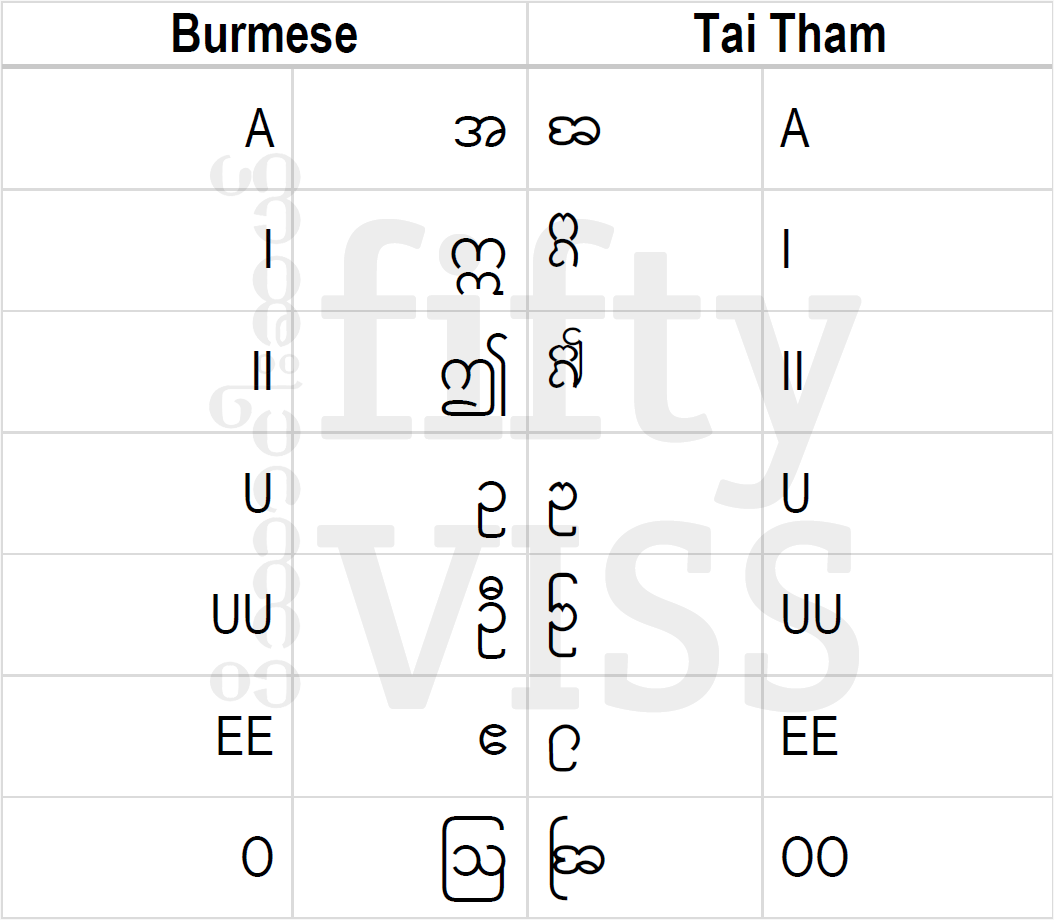 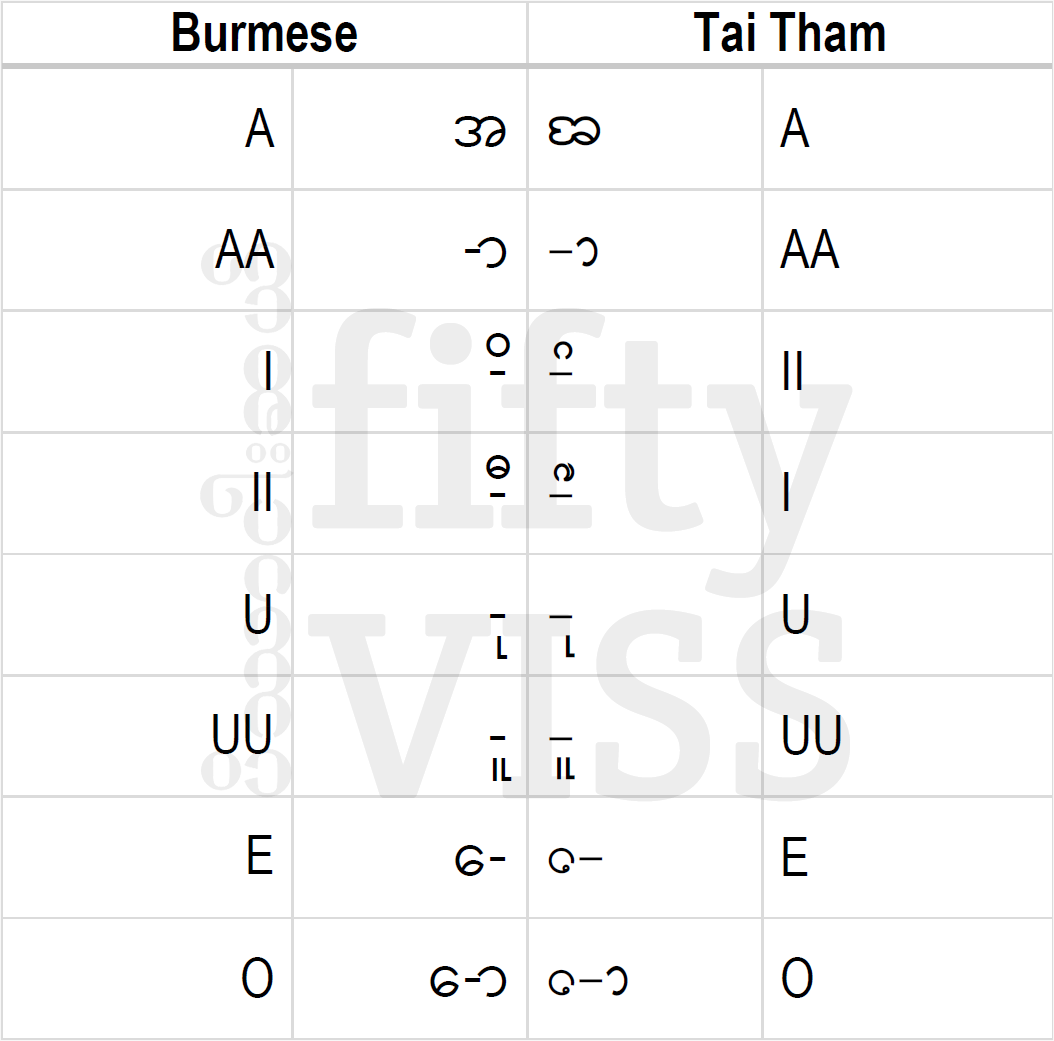 The abbreviated diacritic forms of the independent vowel symbols are also very similar, if not identical, in both Lanna and Burmese.

Punctuation in Burmese and Lanna scripts

Part 3: How to transcribe Pāḷi in Lanna and Burmese

One thought on “Side by side: A comparison of Lanna and Burmese letters”