On Wednesday, Gmail officially announced on its blog that Burmese was added as Gmail’s 74th supported language:

To capture the nuances of this language and make sure the translations were accurate, consistent and complete, we relied on an array of Myanmar speakers from within the country, and around the world. In April 2013 we launched Google Search in Myanmar, and today we’re excited to announce that Gmail now supports Myanmar (Burmese), our 74th language. [link] 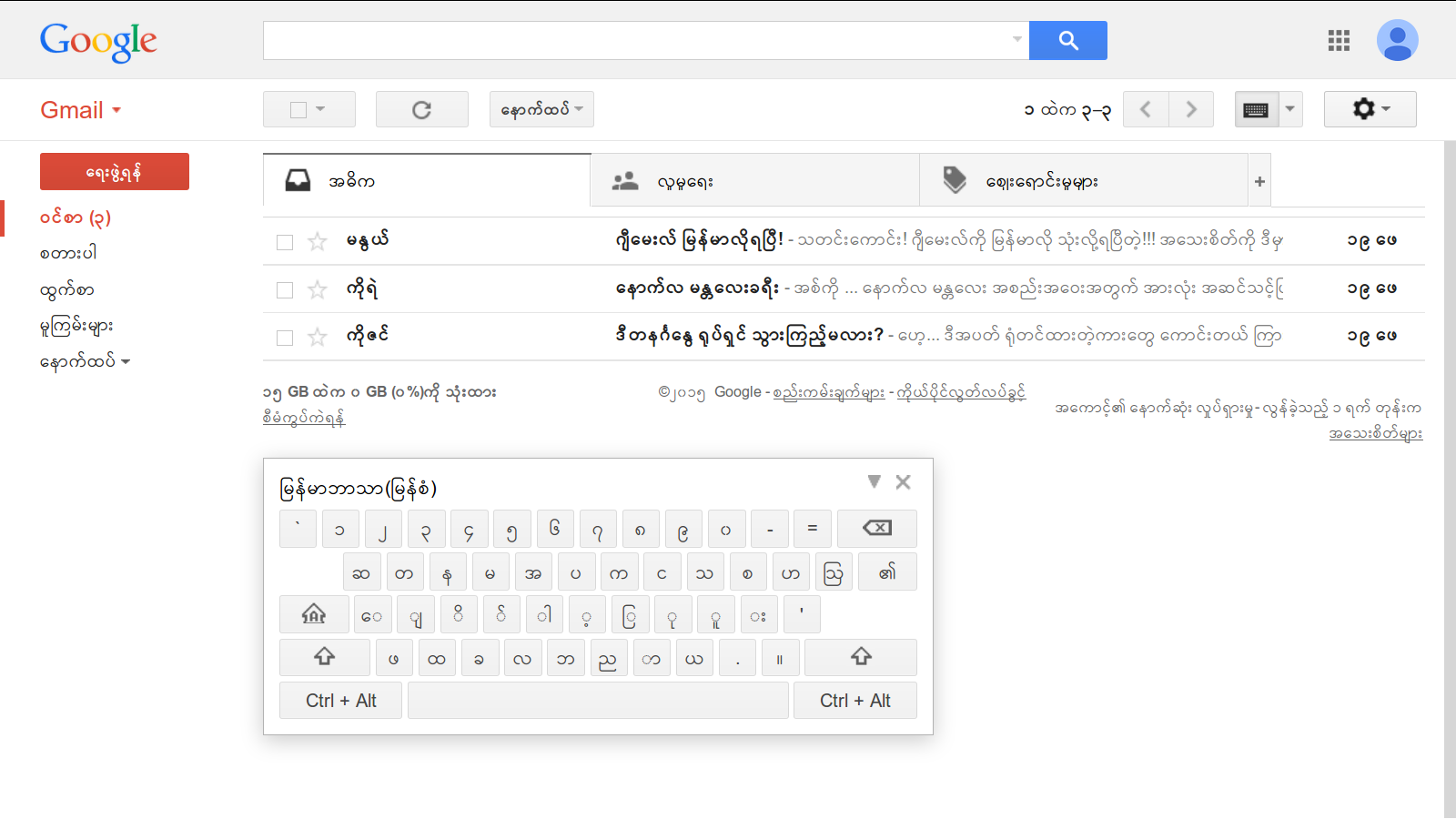 A screenshot of what Gmail in Burmese looks like.

I’ve been using Gmail in Burmese for about a day now, and it is definitely an adjustment. I mean, my entire life, I’ve been used to English language user interfaces, so it’s quite an abrupt change to switch over to unfamiliar vocabulary and lingo (a world where Gmail “labels” are suddenly called တံဆိပ်, “stamps”).

On my Windows 8 computer, the font defaults to Myanmar Text, which is Microsoft’s official Burmese font. Like most Microsoft-designed fonts, rendering of Myanmar Text is clean and crisp. But if you have other Burmese Unicode fonts installed, like Padauk or Myanmar 3, your mileage may vary in terms of readability.

The Burmese language doesn’t have a standardizing body for modern terms, especially IT lingo used today. So most often, tech-related terminology usually end up being approximations of English words. Think “email,” which is most often translated into Burmese as အီးမေလ် (i meil). Consequently, there are huge variations in what Burmese speakers use to reference different terms.

All that to say, So it’s definitely an interesting endeavor, when an Internet giant like Google decides to get into the translation business and weighs in on what these terms are and should be, in effect granting them almost de facto legitimate status.

There are quite a few peculiarities in the Burmese version with respect to Gmail’s translation. For instance, let’s look at Gmail’s default categories: 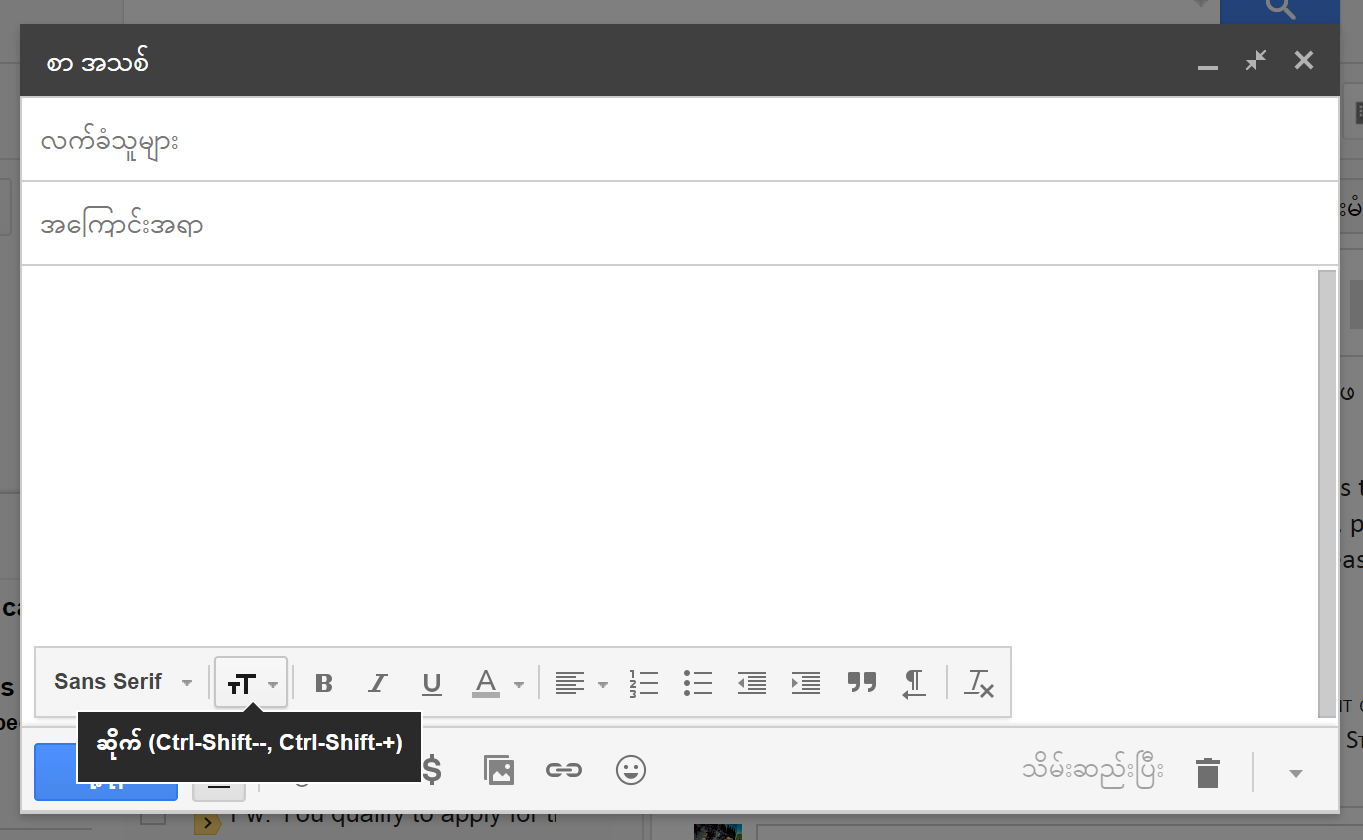 In the compose email interface, I came across these translations:

I guess the real lesson here is that Burmese can be a tricky language to create words for, because Burmese translations can end up sounding like wordy definitions compared to their English counterparts. Given that Burma’s internet penetration is really just in its nascency, it’s definitely an exciting time to establish a Burmese jargon for the internet age. And Google is definitely trying to capitalize on that.

Hopefully the Myanma Language Commission (မြန်မာစာအဖွဲ့) is taking note of the Burmese language’s quickly evolving linguistic landscape. But at the pace things are going, it’s really taken a back seat and will probably react, instead of proactively addressing emerging needs in the Burmese vocabulary.

How to use Gmail in Burmese

For Burmese speakers, here’s how to use Gmail in Burmese: 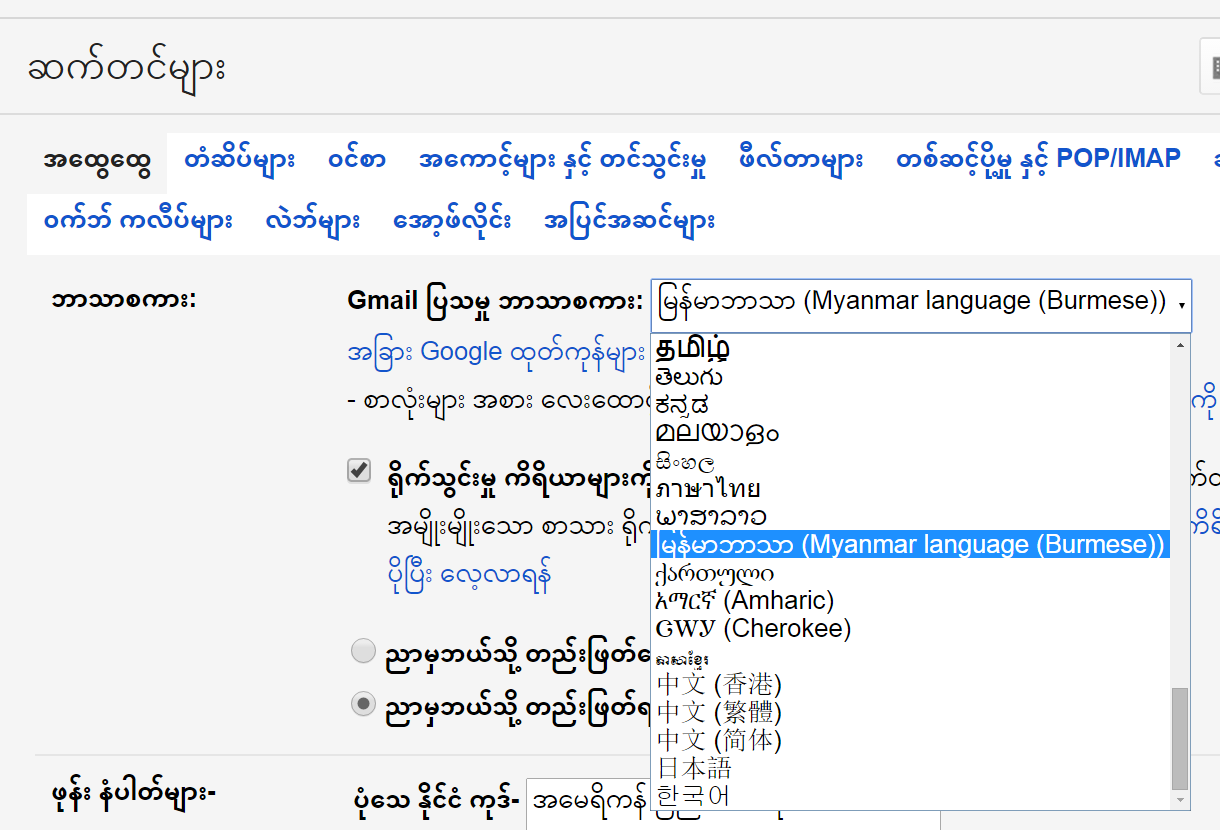 2 thoughts on “Gmail in Burmese: how do the translations stack up?”