The Thein Sein administration is planning to expand its ministerial portfolio, bringing that total up to 32 (a listing as of March 2014 can be found here). In late May, one of Thein Sein’s ministers, Soe Thein, announced that the the Ministry of Youth Affairs would be established [link].

The Civil Service and Training Board headquarters in Naypyidaw

I honestly have no idea what purpose this newfangled ministry would serve, or what its mandate would be. Was there any due diligence done to ensure the benefits of dedicating additional resources and the people’s resources to a new cabinet-level ministry, especially considering that a ministry that is hard to dismantle once it acquires a life of its own? What is the true added value of a Ministry of Youth Affairs, when its functions could be absorbed elsewhere, and at a time Thein Sein has signalled an intention to pare down Burma’s swelling bureaucracy.

I am flabbergasted but not surprised. Burma’s overly bureaucratic structure in its current state, is unseemly and laden with corruption and waste.

Why does Burma have so many ministries?: some theories

1. Clouds the audit trail – reduces the public’s ability to oversee and scrutinize the volume of transactions and decisions being made. By blurring the lines, it makes it more difficult to examine and assess how ministerial duties are being carried out and allow them to act with unacceptable degrees of impunity.

2. Patronage – allows the Burmese government to gift high level government posts and return favors to cronies and their most ardent and loyal supporters, akin to the spoils system (also called the patronage system) that plagued American government throughout much of the 1800s. In a sense, this is still alive and well in the United States, whereby American presidential administrations retain a tradition of basically giving away ambassadorial posts to their most generous political donors.

3. Corruption and graft – lucrative ministries that offer high-level officials a chance to deal and wheel, especially with regard to awarding multimillion dollar construction contracts, are prime suspects for corruption. One such coveted ministry is the Ministry of Hotels and Tourism, which implements and engages in policy-making for Burma’s tourism sector, such as designating tourism hotel zones. Another are the Ministries of Construction and Transportation.

4. Inherent inefficiencies – no strategic planning or forethought in shaping the Burmese government’s administrative bureaucracy. Civil service has largely been glossed over and left untended, even though it is essential for proper governance and carrying out the government’s mandate. Better to reform it now rather than later. Instead of merging various government functions and streamlining work processes throughout the union, the preferred Burmese method is to introduce more outfits and procedures into the mix, almost as if operating on the mantra, more is more.

The state of the Burmese civil service

Unfortunately, Burma’s present-day bureaucracy is just an incarnation of the system carried over from Ne Win’s socialist era, whereby government agencies served as mouthpieces of the Burmese Socialist Programme Party’s political agenda, instead of being non-partisan organizations. Military rule by the successor SLORC (State Law and Order Restoration Council) and SPDC (State Peace and Development Council) governments introduced several more ministries, including the Ministry of Immigration and Population, while the Thein Sein administration has consolidated a few ministries since 2010: the Ministries of Industry 1 and Industry 2  into one, and Ministries of Electrical Power 1 and Electrical Power 2 into one. 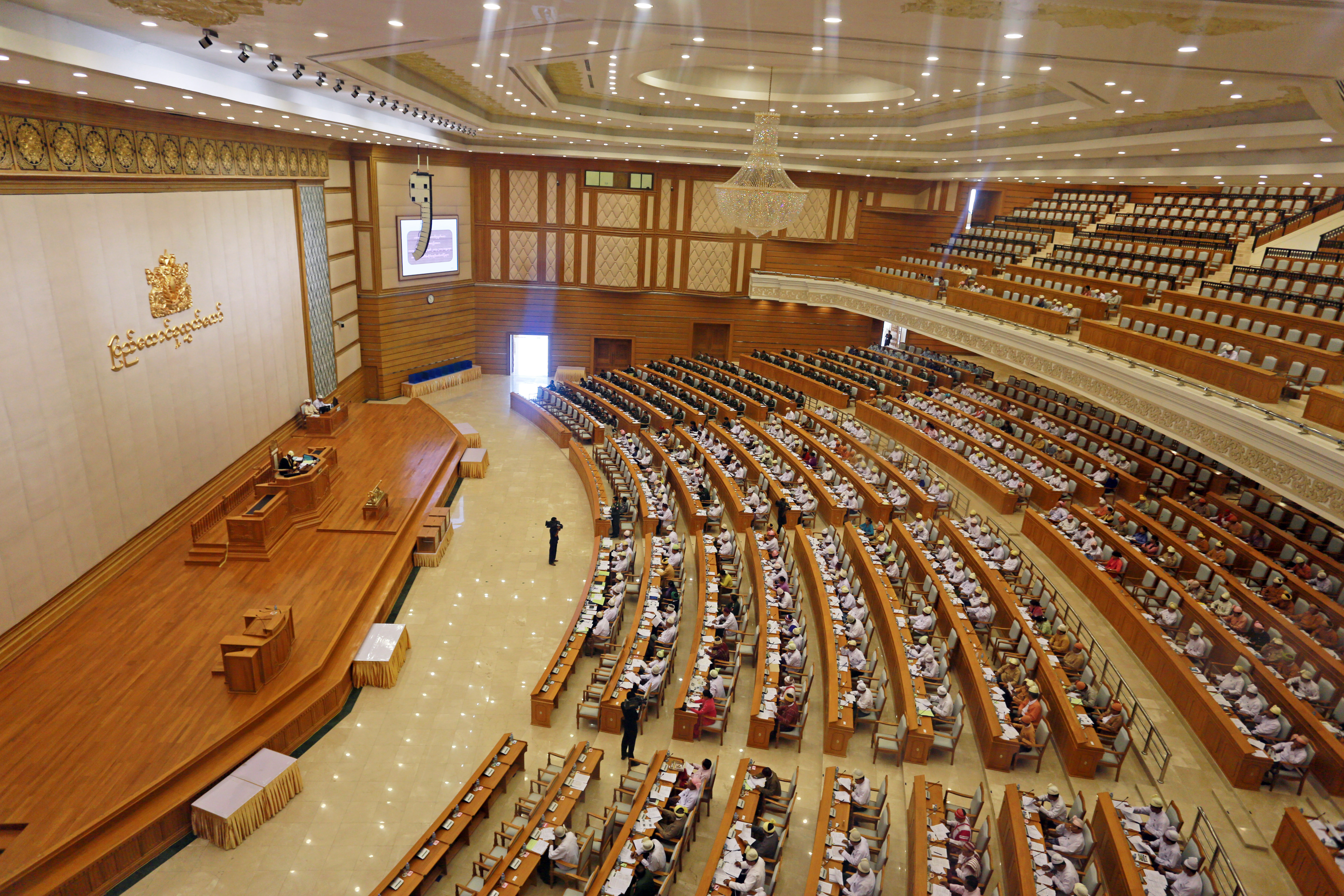 There’s no doubt that patronage, not merit, still plays a key role in the appointment of individuals to key positions of power, to this day. Following is a case in point. Very little is left to imagination when when we have seen largely political appointments, such as Tint Hsan, owner of ACE Construction Group (a major construction firm), as Minister for Sports. And how convenient that he runs one of Burma’s biggest construction firms, for Tint Hsan was was previously Minister for Hotels and Tourism from 2011-2012. Indeed, his firm was awarded several construction contracts, including those to construct the parliamentary complex in Naypyidaw that now houses the Amyotha and Pyithu Hluttaw [link].

That said, I’d like to share a few poignant anecdotes from some articles and scholarly material that pretty much encapsulate the state of the Burmese bureaucracy.

“…one of the fundamental legacies from the socialist era is the inheritance of a largely unaccountable and corrupt bureaucracy.” [link]

“Senior military officers have special influence, even with respect to what might elsewhere be considered basic civilian functions. Within the armed forces, merit of various kinds has been used to determine promotions and assignments. In the civilian components of the bureaucracy there has also been an effort to ensure that the most effective administrators are promoted. Nonetheless, the bureaucracy at all levels remains handicapped by a lack of human and technical resources. Nepotism and other forms of patronage still reportedly help determine promotions to the very highest levels, but the system as a whole cannot be characterized as entirely lacking in merit-based appointments.” [link]

In relation to others: How does the rest of ASEAN stack up? 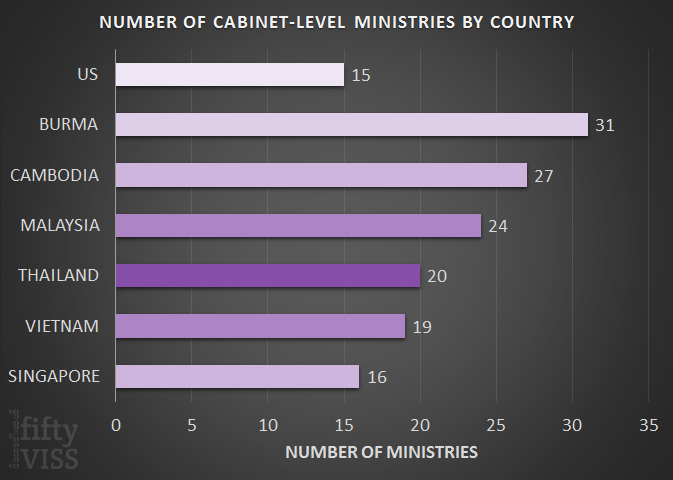 Out of curiosity, I decided to compare against other cabinet-level agencies in neighboring ASEAN countries (based on data available from Wikipedia). As suspected, Burma outnumbers the second worst offender, Cambodia, by 5 agencies, with a whopping 31 cabinet-level ministerial agencies. By comparison, its next door neighbor Thailand only has 20 cabinet-level ministries.

There was relatively little overlap in the scope of responsibilities–essentially, there were only a dozen of ministries present in all of the sampled countries, covering the following functions:

Interesting that India, Burma’s next door neighbor suffers from the same issue. I came across a recent opinion piece in India’s 2nd largest business paper, Mint, entitled “India does not need so many ministries” . The author writes: “There is no evidence that more ministers has led to better governance.” It also tries to explain the expansion of India’s cabinet with each successive administration: “Three, ministries became vehicles of political patronage in the era of coalition politics with even the Indira Gandhi cabinets being far more lean than its successors; the worst manifestation of patronage politics has been the malign practice of handing out to allies ministries that provide opportunities to make money.” Sounds fishily like Burma. But it offers recommendations, providing a compellingly intuitive case to integrate and dismantle a handful of ministries.

Becoming an agent of reform

Ultimately, it’s really in the best interests of the government to act now, than later. There will always be unwieldy officials in positions of power, and resistance to change from the status quo. Good governance, which essentially measures how effectively the government can dole out services and carry out its mandate to its constituents, is greatly lacking. Moreover, given the perception that Burma is a business unfriendly country, it can do a lot to break with its past to attract foreign investment.

“Complementary to this, Myanmar’s civil service must re-orient from seeking rents to providing services. Rent-seeking is especially pronounced in licensing and taxation, and gradually addressing this through increasing civil service salaries and penalties for corruption will help lower the cost of doing business and improve the allocation of labor and capital in the economy.” [link]

In December 2012, President Thein Sein made a speech calling for administrative reform and cutting red tape (full speech here). All nice and flowery stuff, but has there been any concrete action taken since then? Increasing increasing civil servant salaries is merely a patch; it will not root out corruption; reforming and transforming workplace culture will.

The Economic Research Institute for ASEAN and East Asia (ERIA) has a wonderful piece out, entitled “Effective Bureaucracy can Facilitate Economic

Reforms in Myanmar.” The piece runs on the premise that the Burmese bureaucracy can both be a change maker while also undergoing reform: “The bureaucracy in Myanmar has to be a part of the reforms process – by both getting reformed and implementing reforms. Doing more of the same may give an impression of increased activity, but to make the reforms results tangible and sustainable, the bureaucracy requires a restructuring of its mission, mandate and delivery system.”

There are some encouraging signs. Over the years, because the Burmese government’s machinery has decayed and failed to provide even the most basic of government services, civil society and non-governmental organizations have stepped into the vacuum to fulfill these basic needs, everything from healthcare to clean water.

The Thein Sein government has acknowledged the government’s own failings and its inability to deliver even the most basic of public goods and services [link]. But its solution has been to decentralize many functions and delegate the delivery of such services to local governments, which quite honestly rubs me the wrong way, because it doesn’t seek to resolve anything; it just reads a lot like a game of hot potato.

The future of Burma hangs in the balance. It can learn from the lessons of its neighbors, or tread along the exact same path, the status quo. But recognizing that the government’s bureaucracy requires major reform is always the first step.

Got any ideas or suggestions? Send them my way.

3 thoughts on “Bureaucratic bloat: Bigger is not better”