This post was updated on June 22, 2014 to reflect recent developments.

A few evenings ago, a headline on BBC Burmese caught my eyes: “Santisukha monks disrobed, to be prosecuted” (သန္တိသုခ သံဃာများကို လူဝတ်လဲစေပြီး တရားစွဲပြီ). To outsiders, the headline may not mean much. But for well over a decade now, the Mahasantisukha Buddhist Missionary Centre (မဟာသန္တိသုခကျောင်း), a major Buddhist monastery in Rangoon, has been the center of a very contentious ownership dispute, between the Burmese government and the Penang Sayadaw. 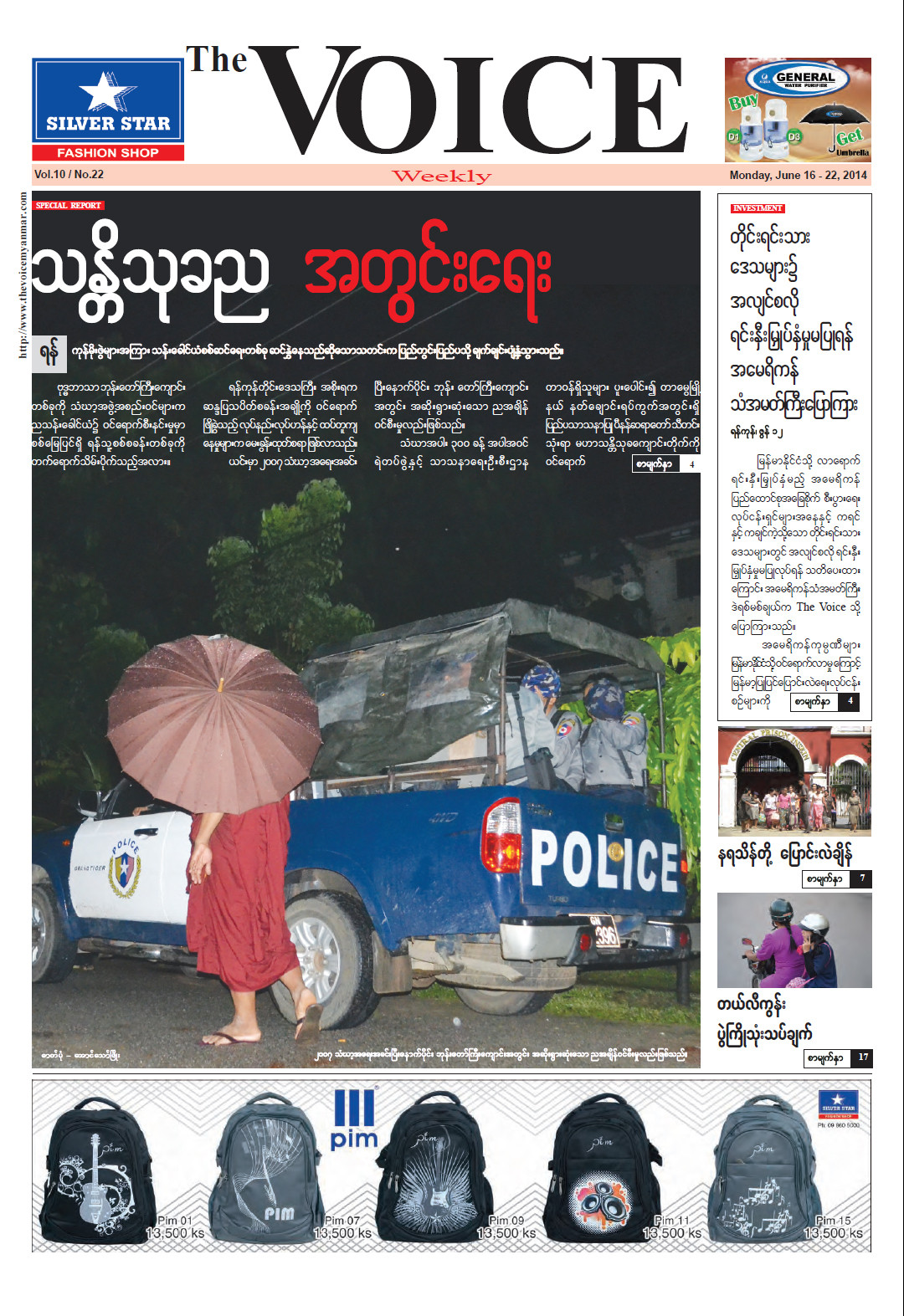 Given that President Thein Sein personally intervened and issued a resolution returning the property under the name of the Penang Sayadaw less than a year ago, it raises some serious questions as to the internal discord within the Thein Sein government, and sheds some light into the palace intrigues of the Thein Sein government and the power plays within. And it also raises more serious issues on the precariousness of land ownership rights in the country, even for prominent religious institutions, and the legitimacy of the government’s hand in religious affairs. 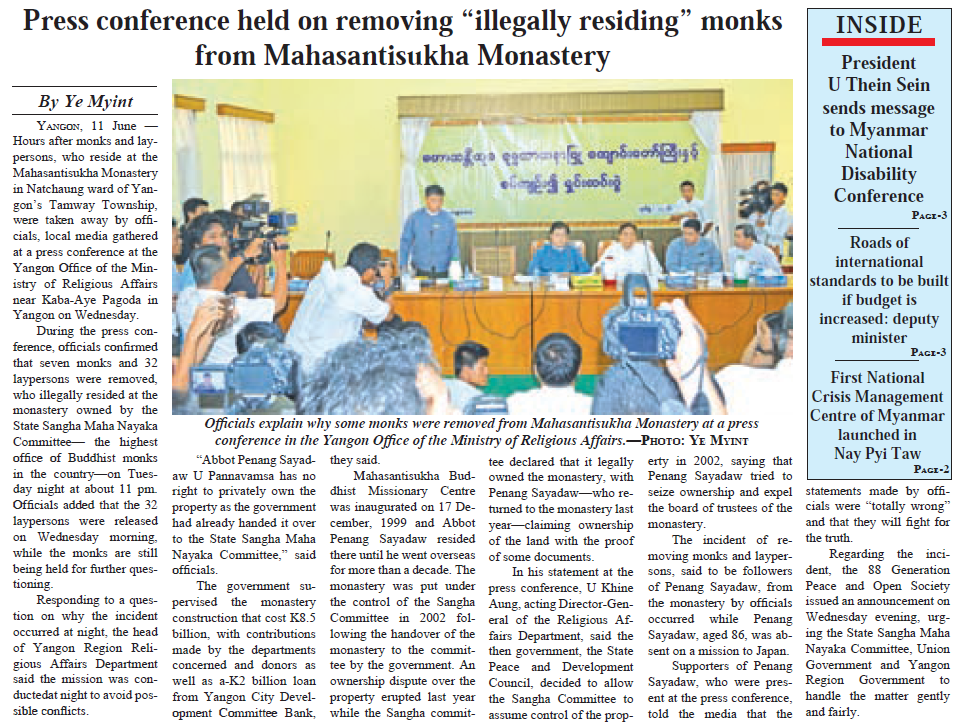 On June 10, Burmese authorities from the Ministry of Religious Affairs, alongside hundreds of police, raided the monastery after nightfall, arresting both laypersons and monks, to reassert its ownership, creating quite a bit of outcry from the Burmese community. This news has generated quite a bit of buzz on Burmese social media. 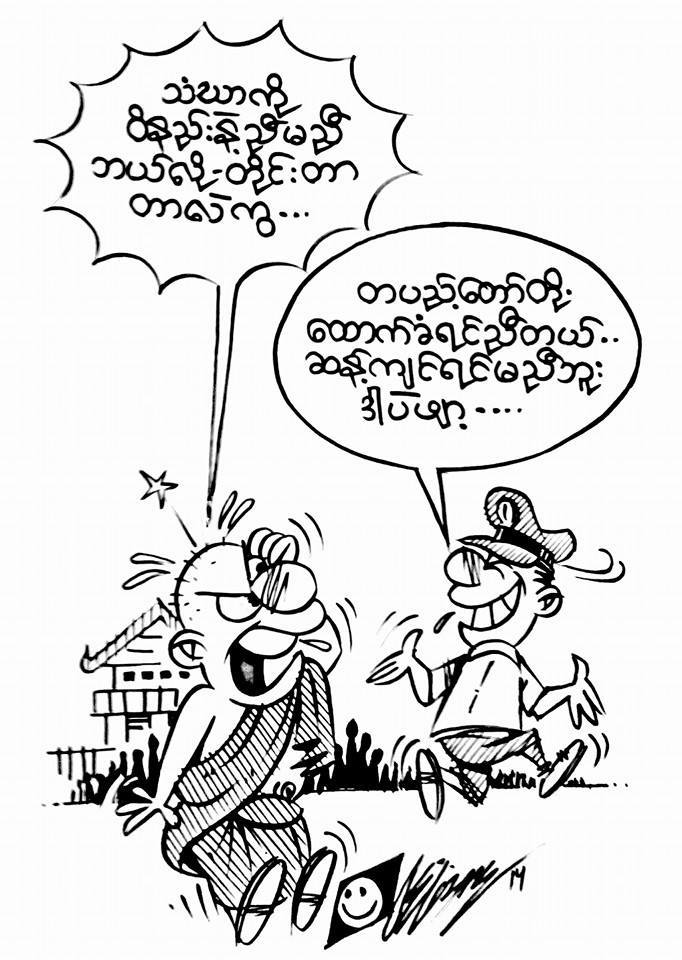 A recently published comic on the recent monastery takeover

A recently published comic questions the Burmese government’s oversight and impartiality in enforcing the Vinaya, the traditional Theravada Buddhist code of conduct for the monkhood. On the left, a monk says “How do you even determine whether the Sangha (monkhood) is abiding by the Vinaya?” (“သံဃာကို ဝိနည်းညီမညီ ဘယ်လိုတိုင်းတာတာလဲကွ…”) On the right, a police officer answers his question: “If you support us disciples, you are in compliance… If you’re opposing [us], then you’re not in compliance… That’s all there is to it!” (“တပည့်တော်တို့ ထောက်ခံရင်ညီတယ်… ဆန့်ကျင်ရင်မညီဘူး ဒါပဲဖျာ့…”)

Penang Sayadaw (U Pannavamsa, ပီနန်ဆရာတော် ဦးပညာဝံသ) – Variously spelt Pyinnya Wuntha and Pyinnawuntha, he is a  prominent Burmese Buddhist monk well known for his Buddhist propagation efforts, having established and served in the leadership of Burmese Buddhist monasteries throughout the world. Just an aside: My family has known the Penang Sayadaw for decades, ever since they immigrated to the United States. In 1979, he established Southern California’s first Burmese Buddhist monastery, now the Burma Buddhist Temple in La Puente. About four years ago, we personally paid homage to him in Penang, at the Dhammikarama Buddhist Temple, his primary residence. So generous was his spirit that he insisted on having his personal kappiya (ကပ္ပိယ, a layperson who assists Buddhist monks, further explained here) chauffeur us to make our stay in Penang as pleasant as possible.

State Sangha Maha Nayaka Committee (နိုင်ငံတော် သံဃာ့မဟာနာယကအဖွဲ့) – Burma’s religious enforcement body, created in 1983 during Ne Win’s socialist era to regulate Burma’s Buddhist monkhood. It operates under the Ministry of Religious Affairs and is led by a number of Buddhist monks handpicked by the government. The Sangha Mahanayaka’s understood role is to ensure that monks abide by the Vinaya, the Theravada Buddhist set of regulations for monastic life (more here). In principle, it is analogous to its Thai counterpart, the Sangha Supreme Council, which regulates the Thai monkhood.

Ministry of Religious Affairs (သာသနာရေးဝန်ကြီးဌာန) – A Burmese cabinet-level ministry that oversees religion in Burma, with an emphasis on Theravada Buddhism and overseeing Pali examinations for the monkhood. MORA’s current incarnation dates to 1992 when SLORC, the ruling junta, separated it from the Ministry of Home Affairs. The ministry’s stated mission is: (a) to allow freedom of faith; (b) for the purfication, perpetuation, promotion and propagation of the Theravada Buddhist Sasana; (c) to help out and participate in international religious affairs; and (d) emergence and prevalence of Myanmar traditional customs and culture. MORA is currently led by Minister Hsan Sint, an USDP politician who was previously the speaker of the Irrawaddy Region Hluttaw.

Than Shwe (သန်းရွှေ) – leader of the State Law and Order Restoration Council (SLORC) and the State Peace and Development Council (SPDC), the names of Burma’s ruling military junta. Also known for his ostentatious donations to Buddhist monasteries, pagodas and monks alike. 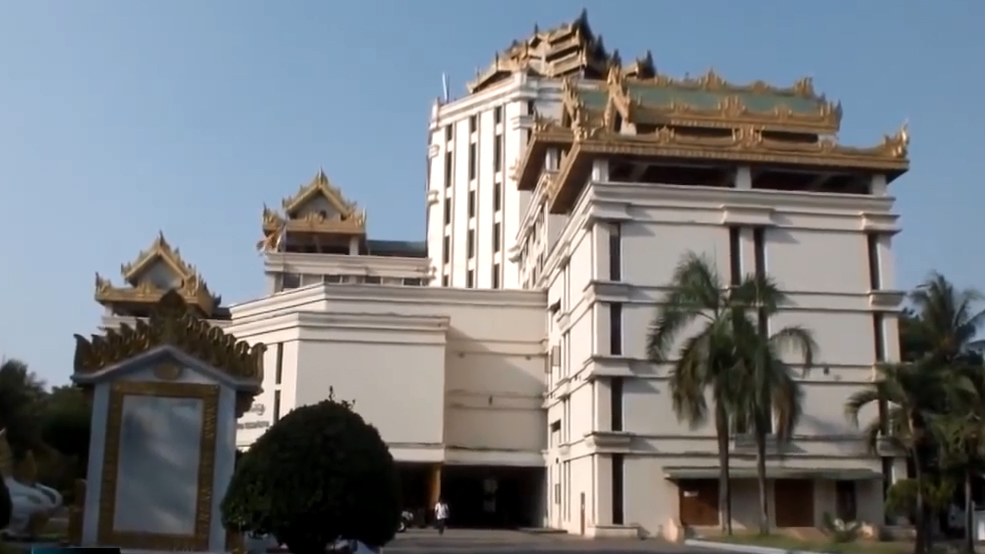 1995 – Than Shwe donates a plot of land in Natchaung Ward of Tamwe Township in Rangoon to the Penang Sayadaw as religious land (thathana myay, သာသနာ့မြေ).

December 17, 1999 – On that plot of land, the Mahasantisukha Buddhist Missionary Centre [link] is formally opened under the leadership of the Penang Sayadaw. The Ministry of Construction and Asia World Company reportedly build the 10 story complex at a cost of $8 million USD (8.5 billion kyats). The inaugural ceremony is held with the attendance of  the State Peace and Development Council, including Than Shwe and his wife Kyaing Kyaing.

October 2007 – In response to the violent crackdown of Burma’s 2007 anti-government protests, the Penang Sayadaw becomes a founding member of the Sasana Moli (သာသနမောဠိအဖွဲ့ချုပ်, International Burmese Monks Organization), a monk-led body concerned with the Sangha Mahanayaka’s espousal of contradictory regulations and oppressive measures against civilians. The Burmese Ministry of Religious Affairs sends the Sayadaw a letter basically implying his actions contradict the Vinaya.

February 2013 – Penang Sayadaw returns to Burma from self-imposed exile in Penang and begins residing at the monastery.

March 2013 – The Sangha Mahanayaka asserts that it legally owns the property and that it has no intention of returning the complex back to the Penang Sayadaw.

February 2014 – The Penang Sayadaw writes a letter urging President Thein Sein to intervene in the dispute, providing additional documentation regarding the ownership rights. 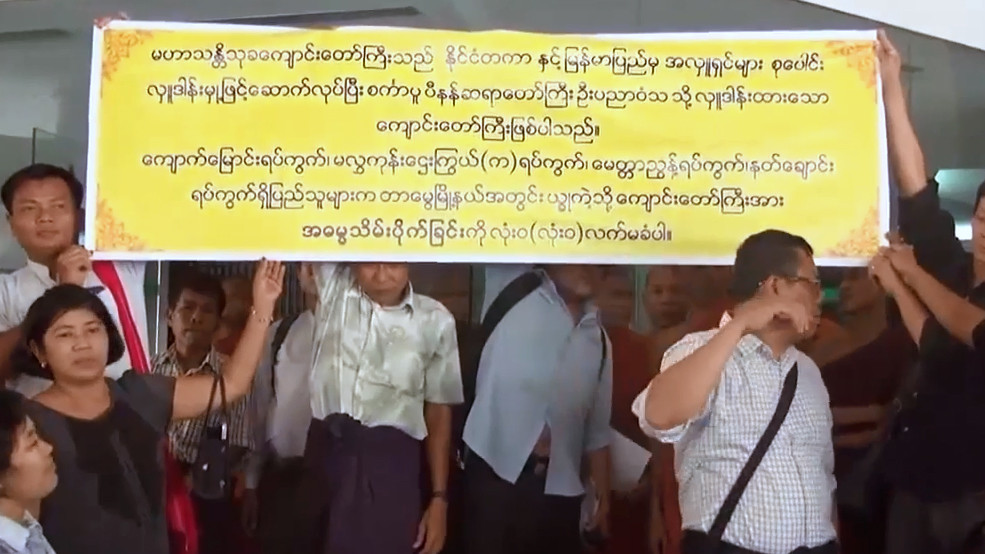 June 10, 2014 – Around 11 pm at night, 300 riot police, alongside Ministry of Religious Affairs officials, raid the complex to arrest and evict residing monks and followers: 5 monks were forcibly disrobed and placed under arrest at Insein prison while another 32 laypersons were arrested. One of the disrobed monks is London-based U Uttara, who heads the Sasana Ramsi Vihara in London. They are awaiting prosecution. The raid is conveniently timed while the Penang Sayadaw is away in Japan.

June 12, 2014 – Following the raid, at a press conference, Khine Aung, the Ministry of Religious Affairs’ Director-General states that the State Peace and Development Council handed over the property in the early 2000s to the Sangha Mahanayaka because the Penang Sayadaw tried to seize ownership and expel the monastery’s board of trustees. The Ministry of Religious Affairs reiterates that the privatization of public property (of the Sangha Mahanayaka) violates the Vinaya and that the property had already been granted to the Mahanayaka.

June 19, 2014 – By Presidential Order (Order No. 12/2014), Thein Sein terminates Hsan Hsint, Minister for Religious Affairs, for his handling of the case. He is now being investigated for corruption: misuse of $10,000 USD in public funds for personal use.

June 20, 2014 – The 5 monks are officially charged at the Tamwe Township District Court under Article 295(a) of the Penal Code (for insulting religion) and the 1990 Law Relating to the Sangha (for insubordination and inciting mutiny against the monastic order). Thein Sein nominates current Deputy Minister for Religious Affairs, Soe Win, to the vacant ministerial post.

June 22, 2014 – The 5 arrested monks are released under bail, set at $20,000 USD each. As soon as they are released, they are re-ordained at the Mahasantisukha monastery.

The following are news clips from RFA, MRTV, Kamayut Media and DVB related to the dispute and the subsequent raid:

The Mahasantisukha Monastery in Rangoon’s Tamwe Township was raided on Tuesday night by officials from the Religious Affairs Department and riot police who escorted the resident monks to the State Sangha Maha Nayaka Committee while detaining their supporters.

Monks and staff residing at the Mahasantisukha Monastery are accused of violating religious property law and will face charges, the Ministry of Religious Affairs warned in a press conference on Wednesday.

A press conference on Mahasantisukha Monastery was held at the Yangon Region Office of the Ministry of religious Affairs, Yesterday. Officials from the Ministry of Religious Affairs explained about the salient points of Mahasantisukha Monastery and the incident that happened at the monastery in Tarmway township, Yangon on Tuesday night at about 11:00 pm. During the press conference, officials confirmed that seven monks and 32 lay persons were removed who illegally reside at the monastery owned by the State Sangha Maha Nayaka Committee. They also answered the queries raised by the journalists.

Activist monk Sitagu Sayadaw told RFA’s Myanmar Service that the State Sangha had acted unreasonably in taking over the monastery in the absence of Pyinya Wuntha, who is also known as Penang Sayadaw.

“The State Sangha Maha Nayaka should think of the nation’s stability—they may have thought they were doing so when they closed the monastery, but instead they have made people angry and upset,” he said.

“The authorities and the State Sangha Maha Nayaka should solve this problem face to face with Penang Sayadaw Pyinya Wuntha, but instead, they took all the monks out of the monastery and closed it while Pyinya Wuntha was out of the country, which they shouldn’t have done.”

Sitagu Sayadaw said he was concerned that the authorities were acting on a “grudge” against Pyinya Wuntha, who had drawn the ire of the former military junta as a prominent dissident calling for democratic reform. He questioned why the State Sangha refused to sit down with the abbot to resolve the dispute when even the country’s armed ethnic rebels have been holding peaceful talks with the government to sign a nationwide cease-fire agreement. “The authorities shouldn’t grab land from [monks] that was donated …

The raid on the monastery also drew concern from Jimmy Kyaw Min Yu, one of the leaders of the 88 Generation Students group, who called the action “unjust.” “The [State Sangha] decided to act, but it is not good to do so by force, especially when Pyinya Wuntha is away,” he said.

said Tuesday that his agency planned to take legal action against those at the monastery for living there in defiance of the law.

“They stayed at their own monastery. They were innocent. By putting innocent monks in prison, [the government] will get punishment from all monks in the country.”

“The incident, in a country where Buddhism is prevalent, was an ugly state of affairs, and we assume there was dishonest intent behind the forceful eviction as it was carried out while the abbot of the monastery was away on a foreign mission. We hereby denounce in the strongest terms the forceful eviction at the monastery by the State Sangha Maha Nayaka Committee and the Ministry of Religious Affairs instead of resolving the situation with compassion and wisdom.”

No matter how the Quasi-Military-Myanmar-Regime and its Quasi-Military-state-backed monastic council make attempts to siege and confiscate Maha Thanti Thukha Buddhist Monastery, we all firmly assume that it is owned by the property right of U Pyinya Wuntha – with both the abbot known as Penang Sayadaw — and the council, the State Sangha Maha Naya. Thus, all the Buddhist monks from Sri Lanka Myanmar Students’ Monk Association call for givingthe right back to the original owner, U Pyinya Wuntha. And that deed of demerit is decried without any exception as an unlawful anarchism. [link]