Here’s a question. What’s the easiest way to distinguish Burmese monks from their counterparts in other countries? Typically, it’s from the color of the robes. Burma is unique among Theravada Buddhist countries in one respect: the color of monk robes. While Cambodia, Thailand, Laos and Sri Lankan monks don robes dyed in bright saffron hues, Burmese monks typically dress in drab maroon or burgundy-colored robes (aside from a few outliers). 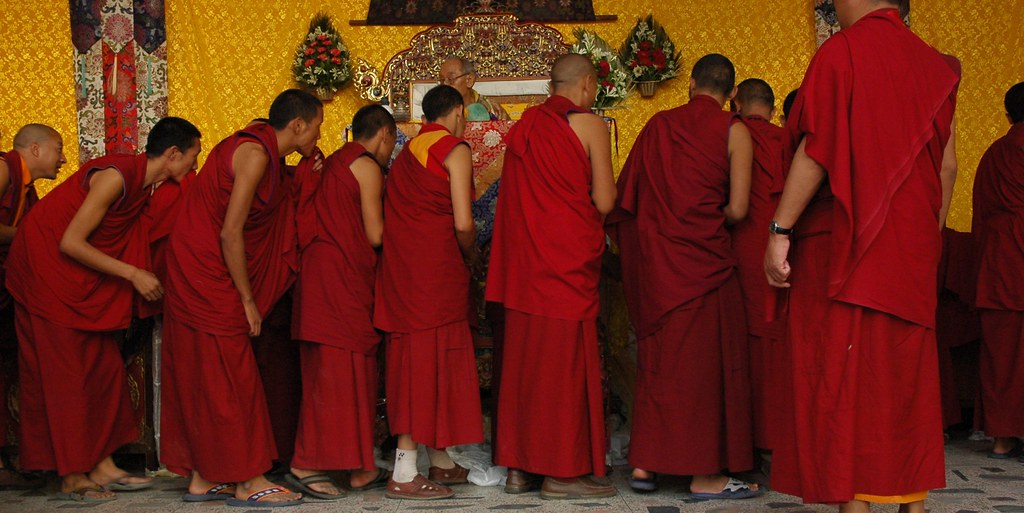 At first, I thought perhaps this was a vestige of Ari Buddhism, a form of Tantric Buddhism practiced in Burma a thousand years ago, a religion that has largely been superseded by Theravada Buddhism, since Tibetan monks, also from a Tantric sect (Vajrayana Buddhism), wear similarly colored maroon robes. In Folk Elements in Burmese Buddhism, Maung Htin Aung describes the form of Buddhism practiced before the dawn of Theravada Buddhism in 1000s Pagan, which is reminiscent of some Tibetan Buddhist practices today:

“In addition, there were also Mahayana Buddhism and Tantric (or magical) Buddhism, but debased and distorted, and bearing strange fruit from the fertile soil of native cults of magic and sorcery. All the different cults were given an artificial unity by the fact that they were all under the patronage of the Ari monks. These Ari monks had some acquaintance with the Buddhist scriptures, gloried in the name of the Buddha, and wore dark brown robes and conical hats. But they also presided over the Nat spirit festivals, at which hundreds of animals were sacrificed.”

However, I came to discover that this wasn’t always the case. In fact, the switchover to maroon as the preferred color choice of Burmese monks appears to be fairly recent, largely occurring in the last few decades. For instance, paintings and artwork commissioned during the Konbaung dynasty, the last Burmese dynasty, show monks dressed in bright yellow robes.

Extant British materials from the pre-colonial to colonial periods also describe monk robes as being “yellow.” For instance, in describing the popularity of monastic education in colonial Burma,  The Imperial Gazetteer of India (1908) writes:

“It will be seen therefore that more than half the education of the country is carried on by the wearers of the yellow robe independently of the Educational department.” (p. 226) 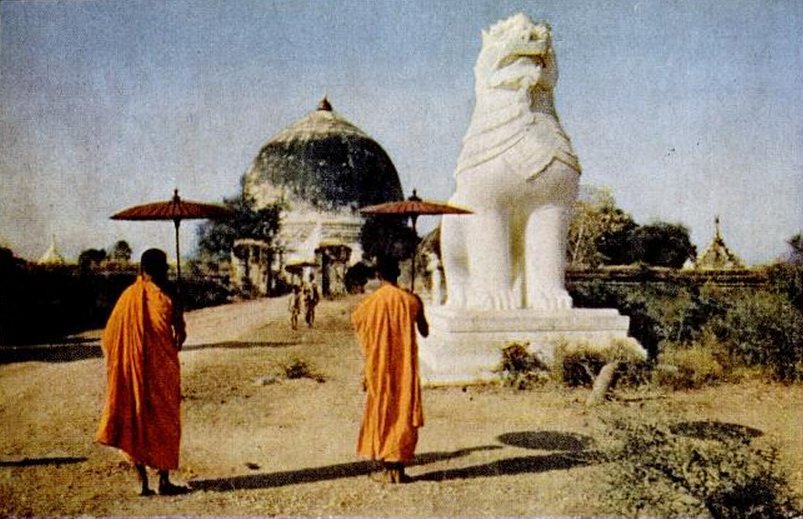 As late as the 1950s, color photos of Burmese Buddhist monks show them dressed in bright saffron colored robes, similar to those worn by other Southeast Asian monks. 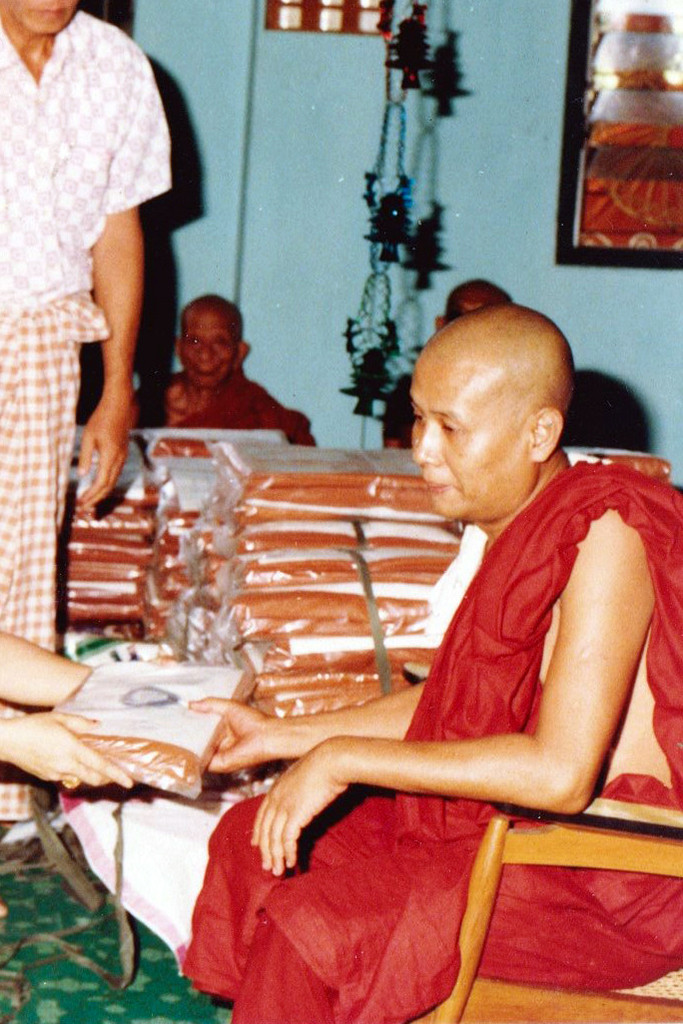 A photo of my grandmother (conveniently cropped out) offering maroon robes to a Buddhist monk in the late 1970s.

Yet by the 1970s, most Burmese monks were sporting maroon colored robes. For instance, in a late 1970s photo of my grandmother donating monk robes, one can readily see a pile of maroon robes. Also, all of the monks in the photo are dressed in burgundy hues. So what gives? 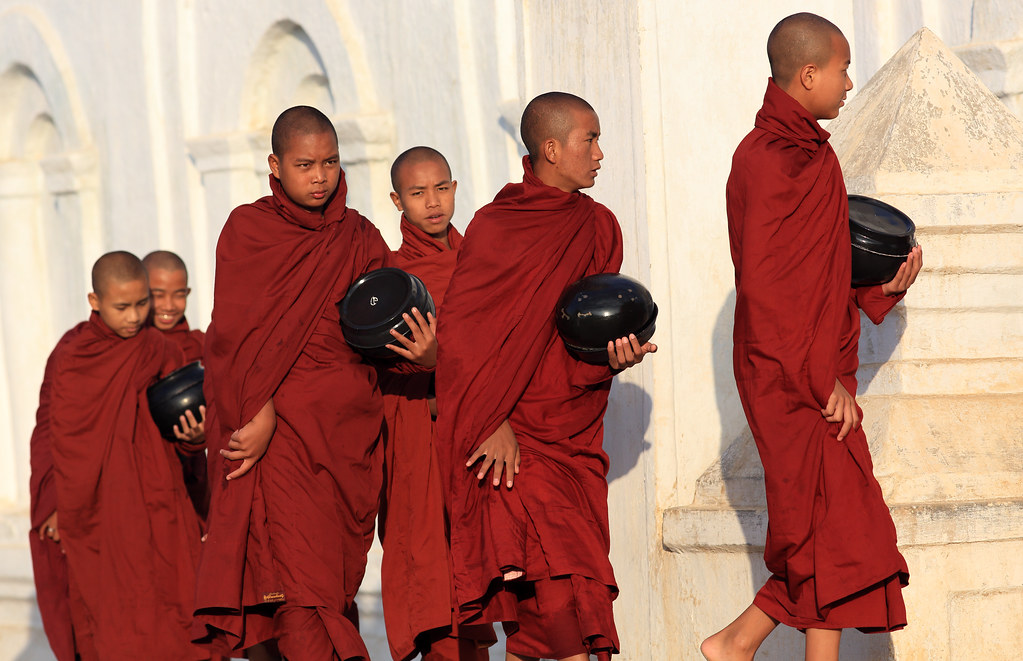 Perhaps this is simply the result of a conscious decision made by Burmese companies that manufacture the monk robes. One little known fact is that the majority of Burmese monastic robes are now manufactured in large batches by a handful of large factories, not woven by individual donors. Brand names like Zawtika, Galone, and Thamada now dominate the domestic market. Traditional weaving of monk robes, a laborious process, has largely been confined to ceremonial festivals and competitions (like the Shwedagon matho thingan (မသိုးသင်္ကန်း) robe weaving competition). Or perhaps the Burmese interpretation of the Vinaya’s regulations governing a monk’s robes has changed in recent years?

In any case, if anybody knows, please shed some light. I’ll be interested.

7 thoughts on “Why do Burmese monks wear maroon colored robes?”