I recently got a hold of a small but useful trove of data, a 2014 exam roster of nearly 600 Burmese university students (in their early 20s). Using Excel, I began parsing the data, segmenting the names by word (not syllable) and categorizing by gender, to discern patterns in naming preferences. Given that there’s not much out there regarding Burmese names (statistically-speaking), I thought I’d take a stab at this and present some simple findings.

I’ve been able to shed some light on the top name choices and discern some naming patterns. However, I have to admit, given that almost every single name on that roster was one-of -a-kind, it’s difficult to really assess the complete picture and see conclusive patterns.

In light of the ongoing nationwide census, the first in Burma since 1983, it’s gotten me thinking. How useful would it be for the government to release the raw data to the public to manipulate? Of course, the accuracy of this census is debatable, as are many of the questions being asked..

Details on the data

Segmentation: not by syllable but by word.

Determination of gender: Already provided in the roster as an honorific: Maung (male) or Ma (female)

Other notes: I did not control for name’s origins or etymology (whether Shan, Chinese, English, etc.). The overwhelming majority of names were Burmese origin names.

Diversity of words. All in all, there was a dizzying number of words encountered through this exercise. And surprisingly, for both female and males, very few names were shared. There were a few instances in which 2 or at most, 3, students had the same exact name. This, even though these students did not possess surnames. It almost goes to show the ingenuity of Burmese families in designing unique names for their children, which may be a motivating factor in each succeeding generation’s ever more complex names. 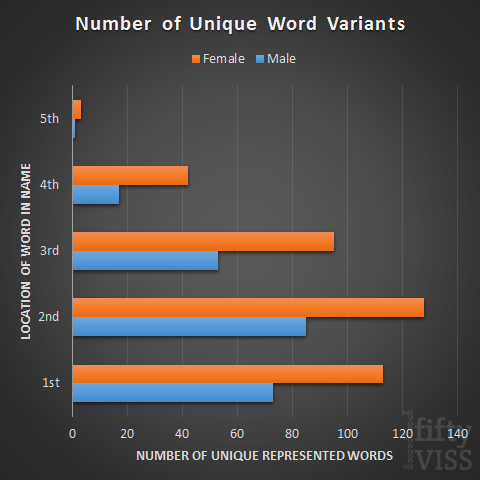 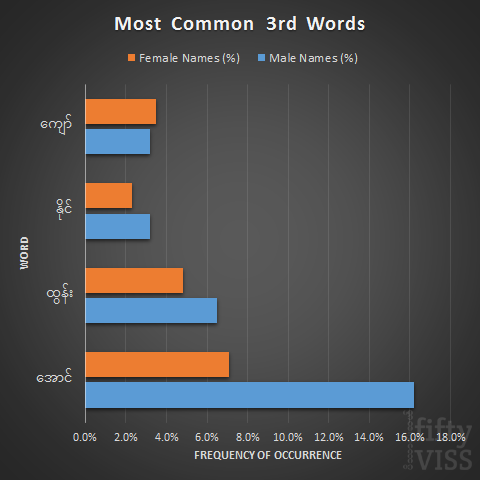 I also observed a naming pattern: the third word in a given name had markedly less variation than the first two. In fact, there was considerable overlap for both males and females in the 3rd word of their name–4 of the top 10 words were shared by both genders: Kyaw, Naing, Htun, and Aung. 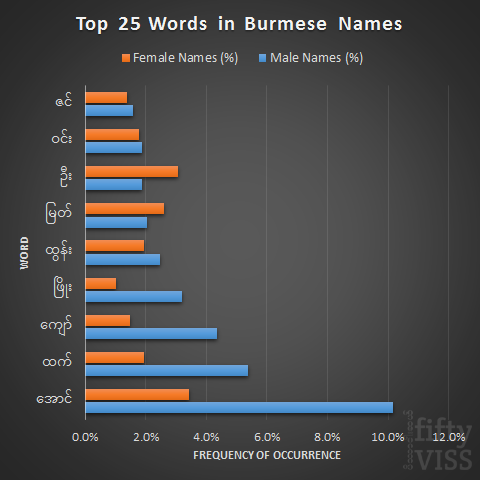 Of the most common words used in the set of Burmese names, there was little overlap between frequently used female and male names. Only 9 of top 25 words were used for both males and females: Zin, Win, U, Myat, Htun, Phyo, Kyaw, Htet, and Aung. Makes sense, considering they are relatively unisex words.

Number of Syllables in a Burmese Name: 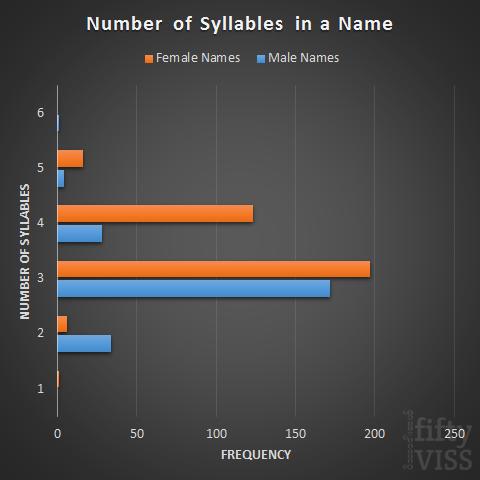 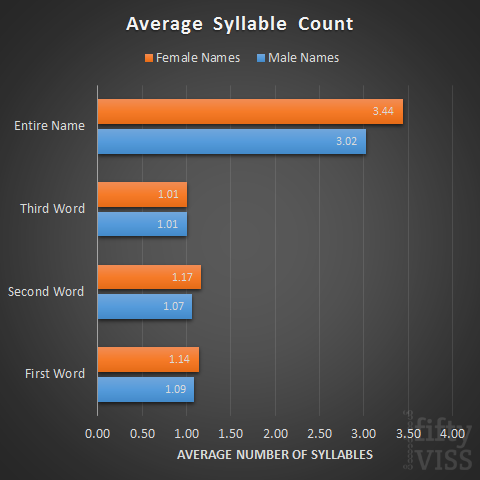 The average number of syllables for both males and females was 3. Moreover, in line with the Burmese language’s monosyllabic tendencies, the average syllable length of both boys’ and girls’ name was 1.

I don’t deny that there’s inherent sampling bias. For one, the data does not account for regional variations in naming trends, as the majority of these students would have originated from somewhere in Lower Burma (most likely the Rangoon region). Also this does not account for variation in socioeconomic class (predominantly urbanites with relatively well-off families). But I think it does provide a fairly sweeping overview of Burmese naming trends for the late 1980s-early 1990s generation. Moreover, I realize that the sample size may be insufficient.