This is the third installment on Alcohol and the Theravada Buddhist World.

I decided to take a closer look against the ring of countries that constitute the Theravada Buddhist world, in the context of alcohol consumption. Theravada Buddhism takes a relatively hard stance on drinking alcohol (or any mind-altering substances, for that matter) so it was quite interesting to see great variation in consumption patterns among these countries. At one end of the spectrum was Laos, whose citizens, both male and female, embrace alcohol. At the other end of the spectrum was Burma, the least likely to drink of the bunch.

Below is a visualization of the data I obtained through the World Health Organization’s Global Information System on Alcohol and Health (GISAH). Most of the data is from 2010. WHO also produces an annual Global Alcohol Report (2014), available in PDF. Urbanization rate is from World Bank data (2013), while income data comes from the International Monetary Fund’s World Economic Outlook Database. But of course, data limitations meant that I wasn’t able to see consumption by ethnic group or religious affiliation. 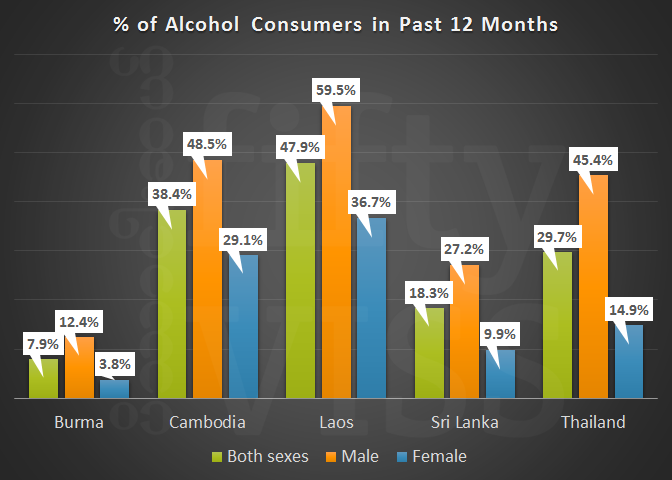 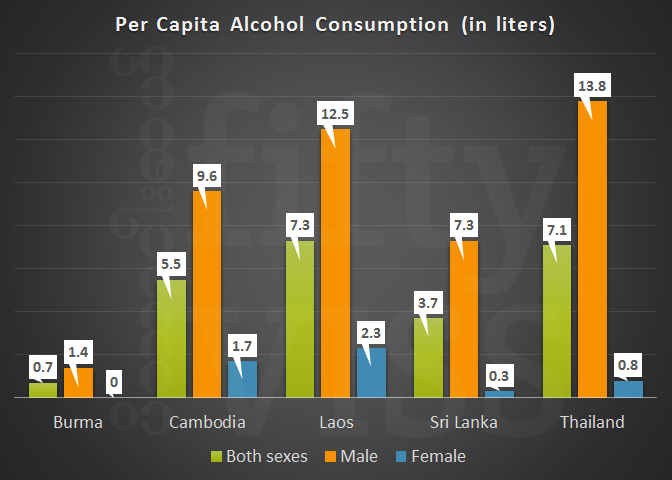 In terms of annual per capita alcohol consumption, Laos, once again, leads the pack. It’s an important observation to make, that in both Thailand and Laos (both are predominantly Tai-speaking cultures), male alcohol consumption is remarkably high, averaging about 13 L (13.4 gal) per annum. By comparison, the worldwide average is 6.2 L (1.6 gal). 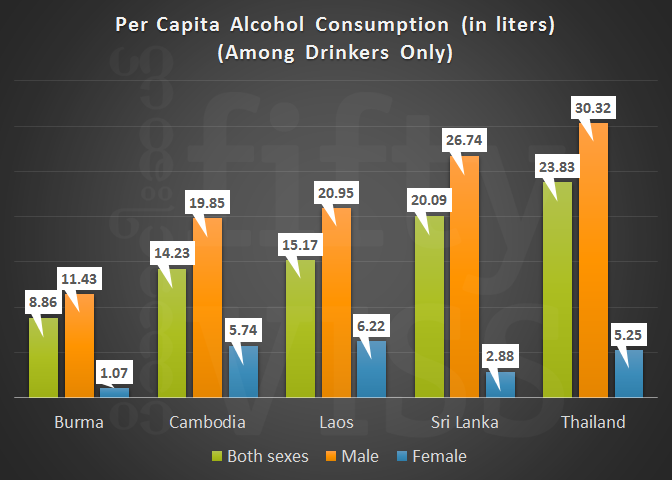 Among drinkers, the annual per capita average consumption among Theravada Buddhist countries ranged from 8.86 L (Burma) to 23.83 L (Thailand). For some context, 1 L is equal to about 2.8 bottles of beer (standard US size). 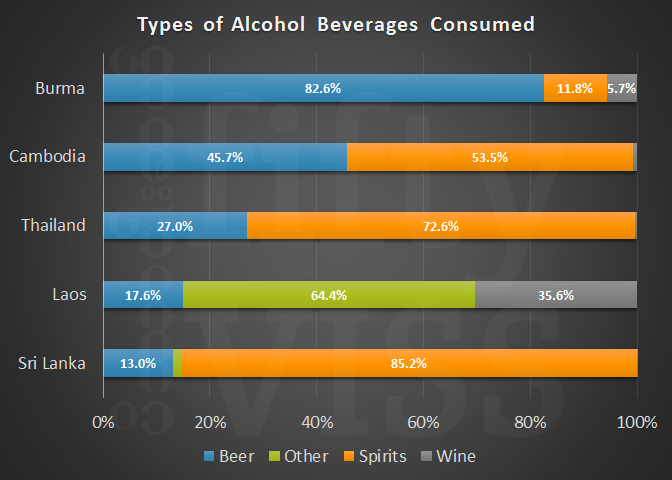 In terms of alcoholic beverage preferences, there was considerable variation. Burma is the only country where beer was the favored beverage of choice, outstripping other types by a margin of 4:1. Almost 80% of the alcohol drunk in the country was beer. Beer stations, even in formerly “dry” remote towns, are now ubiquitous throughout Burma. Perhaps this is just the natural consequence resulting from the onslaught of zealous beer marketing in the 1990s, led by Myanmar Beer, a brand produced by the military-run Union of Myanmar Economic Holdings. My guess is that the 11.8% for spirits is mostly palm toddy, the traditional fermented drink of central Burma.

Sri Lanka, Thailand and Cambodia seem fond of spirits. In Thailand, the indigenous spirit of choice is Mekhong, a rum-like spirit made mostly from sugar cane and molasses. In Sri Lanka, it’s coconut arrack, a distilled spirit similar to toddy or palm wine. In Cambodia, it’s rice or toddy wine. Laotians seem to prefer other alcoholic concoctions. most likely Lao-Lao, a traditional alcohol made with fermented glutinous rice, a Laotian staple. 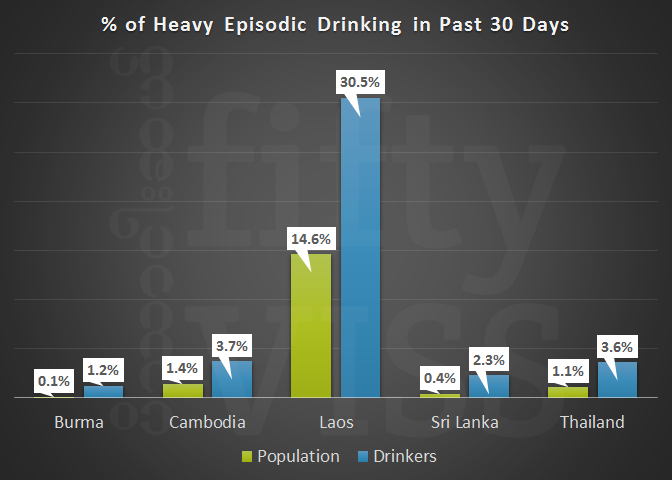 All of which begs the question, how much of an impact does this have on the number of drunk driving incidents, motor-related accidents and deaths, murders and the even the prevalence of domestic abuse and addiction disorders like alcoholism. 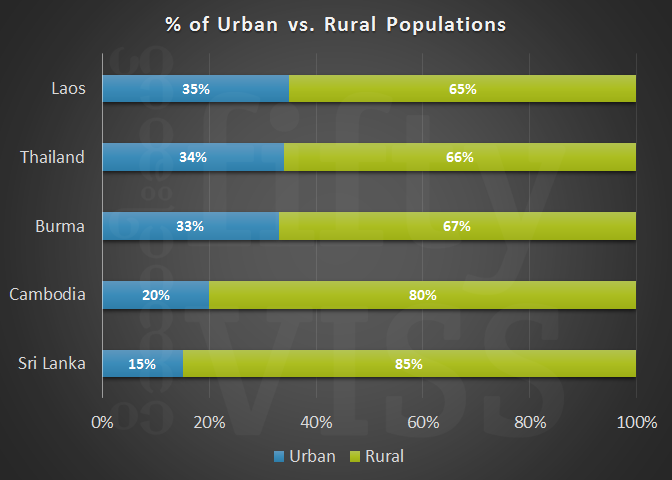 Second was consumable income. I couldn’t find a more reliable standard measure of income across these countries, so I’ve used GDP per capita. 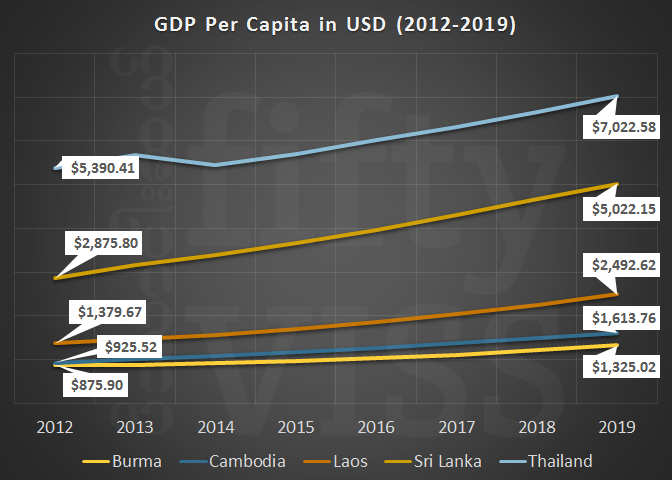 Thailand had the highest GDP per capita, over 5 times the amount of Burma’s, the poorest of the group. (Keep in mind that Burma’s recent census counted 9 million fewer people than previously estimated, so Burma’s estimated GDP per capita has risen by 17%, overtaking Laos.)

Considering that Burma and Laos are nearly neck and neck, calling consumable income a major influence would be a stretch. 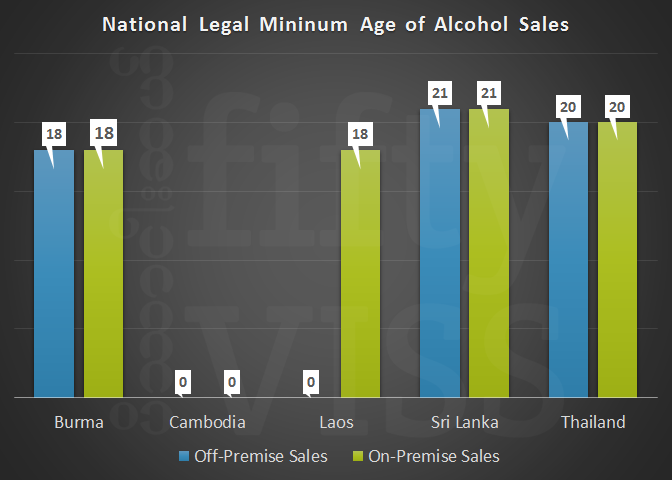 Finally, I looked at the government policy, that is, regulation of alcohol sales and whether there’s a minimum age. For the purposes of defining legal minimum ages, WHO (World Health Organization, 2004, Global Status Report on Alcohol Policy, p. 15) defines off-premise and on-premise sales as follows:

For Burma, the minimum age is 18 (a colonial holdover, section 21(6) of the 1928 Excise Rules), Thailand 20 (20 is the age of adulthood in traditional Buddhist law), Sri Lanka 21. Earlier this year, there was talk in the Burmese national parliament of setting minimum drinking ages, which was rejected.

Impact from other influences?

The following is a list of influences that may presumably play a role in the acceptance and even embrace of alcohol as part of daily life and consumption. If you have more to add, please leave a comment below.

3 thoughts on “Drinking trends in the Theravada Buddhist world”