Ethnic identity is a social construct, and a very fluid one that at that. It’s by no means immutable, especially in multi-ethnic societies like Burma, where many assume multiple ethnic identities depending on context, as a means of conducting business, gaining social acceptance, and receiving education. For the Burmese community, there’s a also certain ambiguity attached to the term “Burmese,” and whether it’s a reference to the Burmese nationality, the Burman ethnicity, or both. 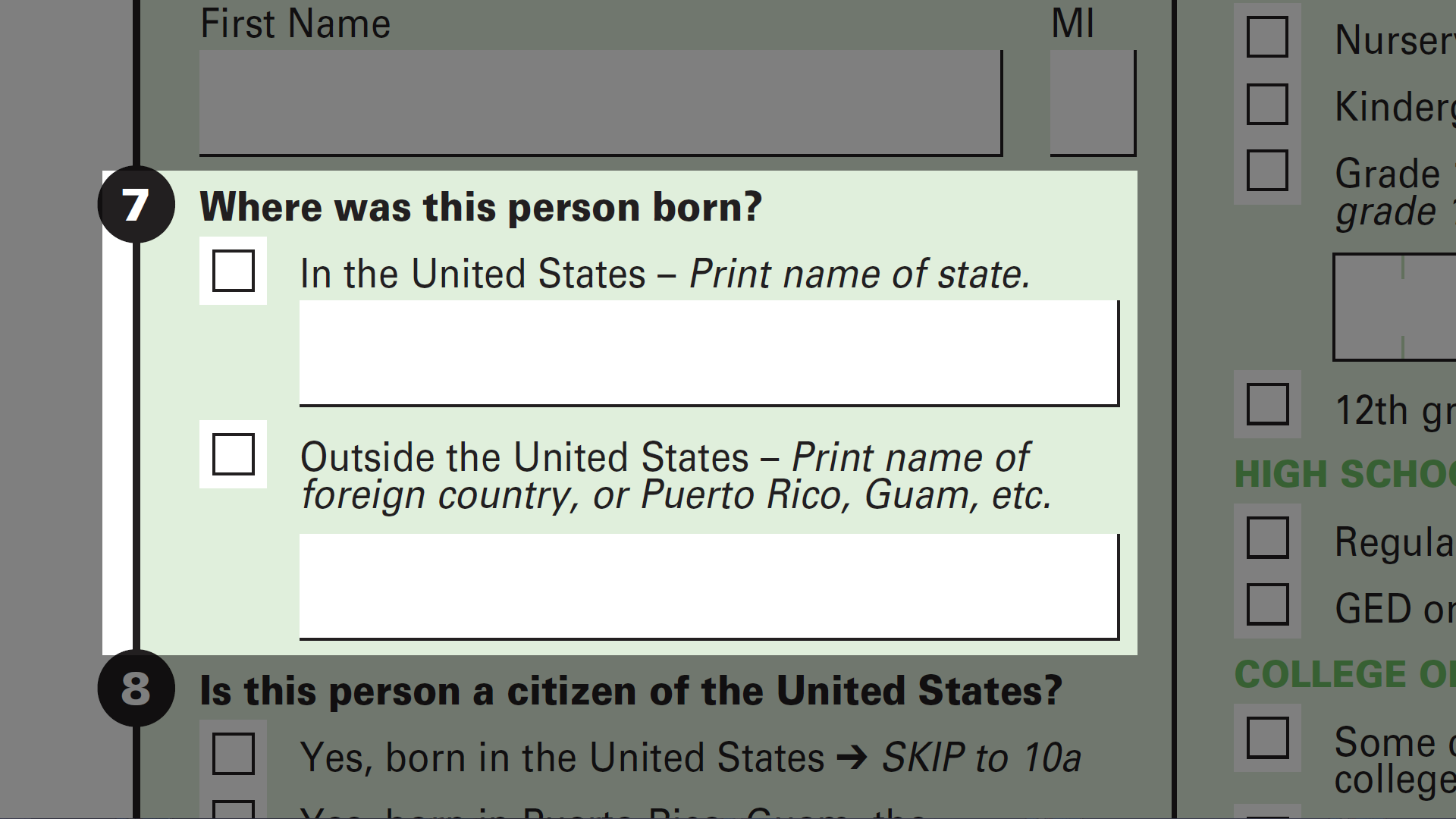 I was curious to see how this plays out among the Burmese American community, so I went to the American Community Survey (ACS).

Unfortunately, there’s no data on place of upbringing, so the closest I could get was birthplace.Luckily for me, ACS actually collects birthplace data, unlike the American census, which stopped collecting birthplace information after 2000. 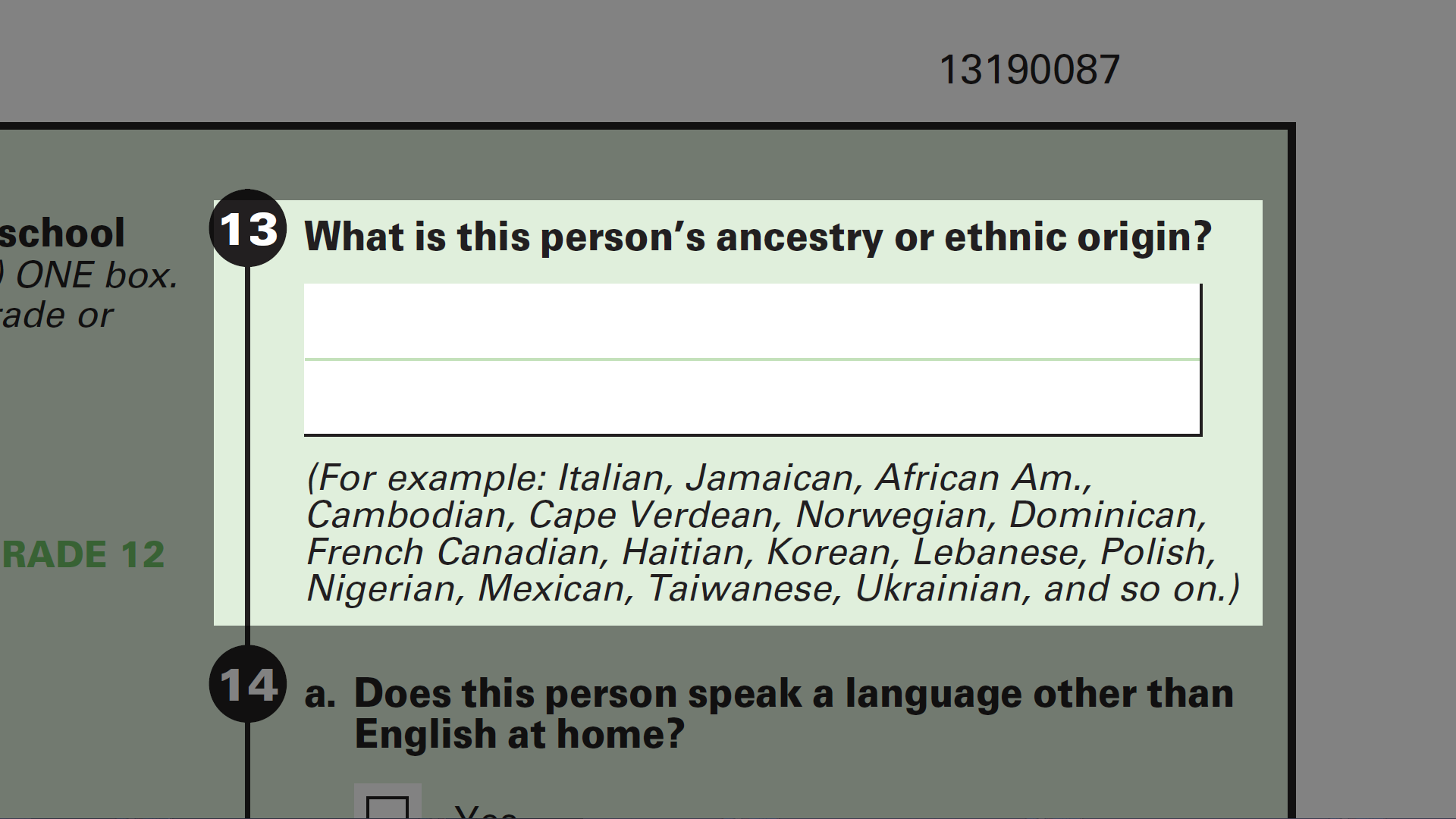 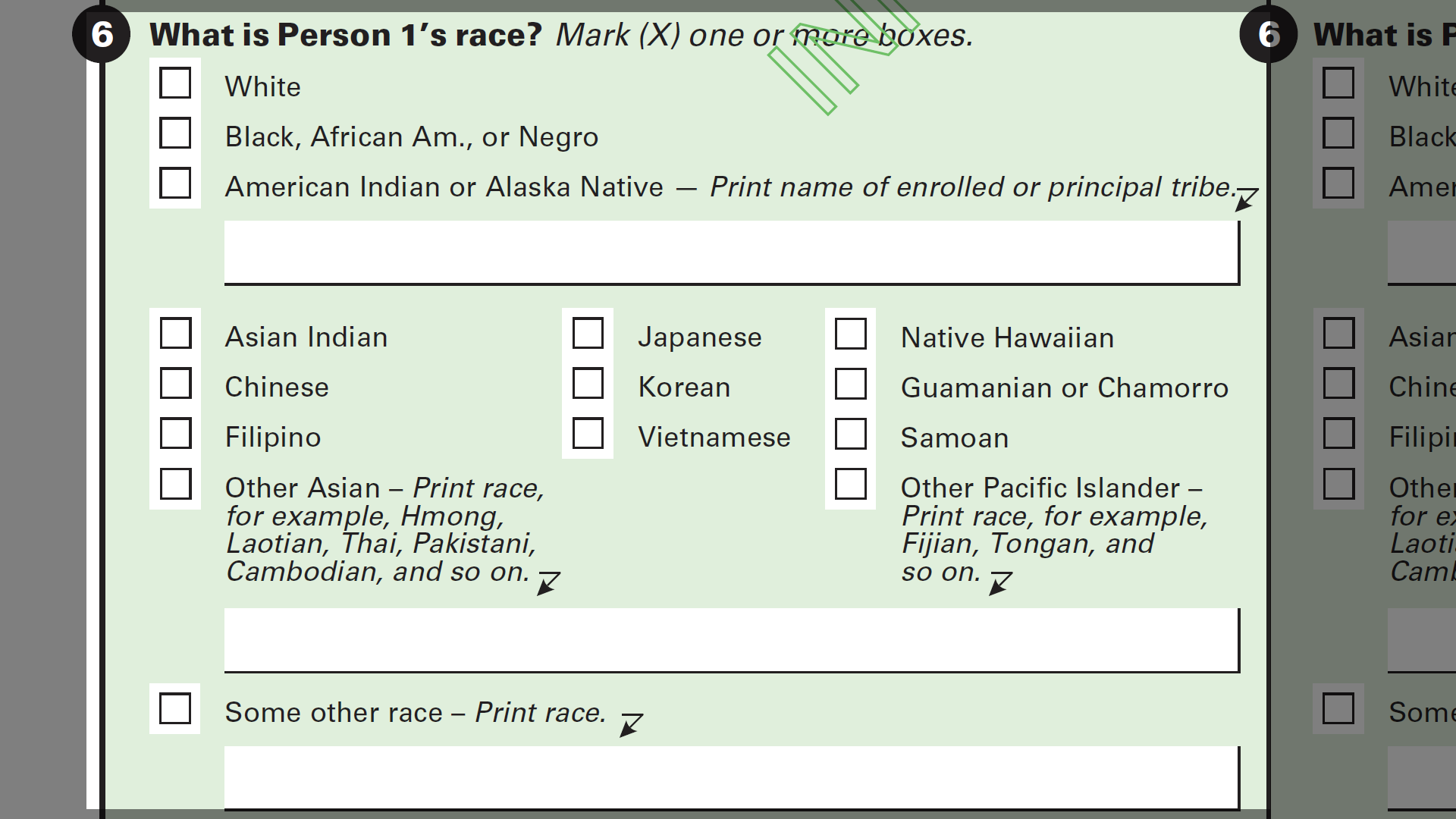 The ACS also asks about race and ethnic origins, in ways that often at odds with the average American’s conceptualization of race and ethnicity. For example, a Cambodian of Vietnamese descent could complete this form in a number of ways. As could a Javanese person born in Jakarta.

Anyway, using data from the 2006-2010 American Community Survey, I sorted for the self-identified ethnicity of American residents born in the U.S. Here’s what I found: 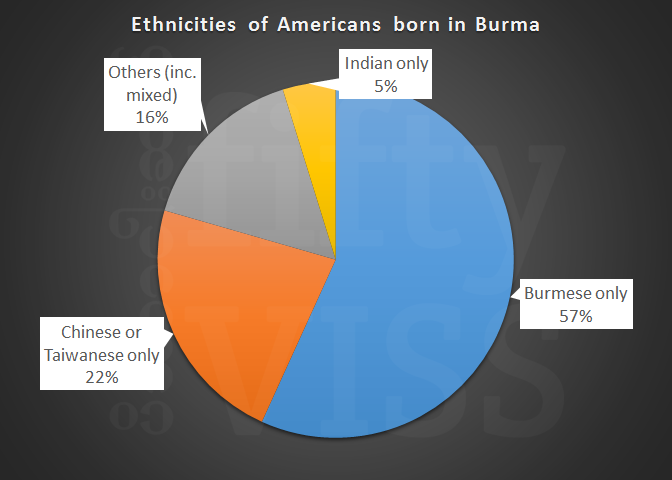 Little more than half (57%) of Burma-born Americans identified as “Burmese.” Perhaps notably, the second largest contingent, almost a quarter of Americans born in Burma, was of self-identifying Chinese and Taiwanese. The third was of persons selecting multiple categories (Chinese + Burmese, White + Burmese, etc.)

The Chinese case isn’t too unusual. I’ve met many descendants of Chinese born in Burma who are fully assimilated into Chinese culture via marriage. For instance, one of my college roommates had a Chinese grandfather born and raised in Burma, who married a Taishanese woman. Their descendants all identify as Taishanese. There are also Burma-born Chinese who resisted assimilation into mainstream Burmese culture.

On the other hand, there exist individuals of Chinese descent, whose families were or are so deeply rooted in Burma, or had lost their linguistic connections to the greater Chinese speaking world, such that they could not consider themselves Chinese any longer.

The chart is available in table form below:

Just out of curiosity, i decided to query the birthplaces of self-identifying Burmese Americans. 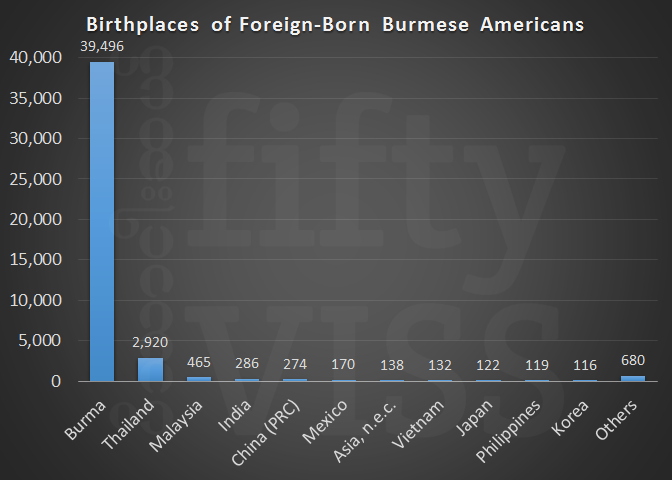 Almost 90% of Burmese Americans botn outside the U.S. were in fact born in Burma. Another 6.5% were from Thailand, perhaps largely represented by Burmese born in the refugee camps dotting the Thai-Burmese border. Interestingly enough, countries outside Asia, notably Mexico, were also represented in the top 12 countries of birth.

The data was drawn from queried tables (B05006: PLACE OF BIRTH FOR THE FOREIGN-BORN POPULATION IN THE UNITED STATES ) on the Census Factfinder website.