During my review of the 2014 Census results, I came across a number of interesting maps that demonstrate exceeding disparities within Burma, everything from population density to electricity penetration, not readily apparent by the national “averages.”

These disparities are palpable even from bordering regions, so I did a quick runthrough against World Bank data to see where the states and regions fall among the nations of the world, to demonstrate these vast differences further. Findings below. 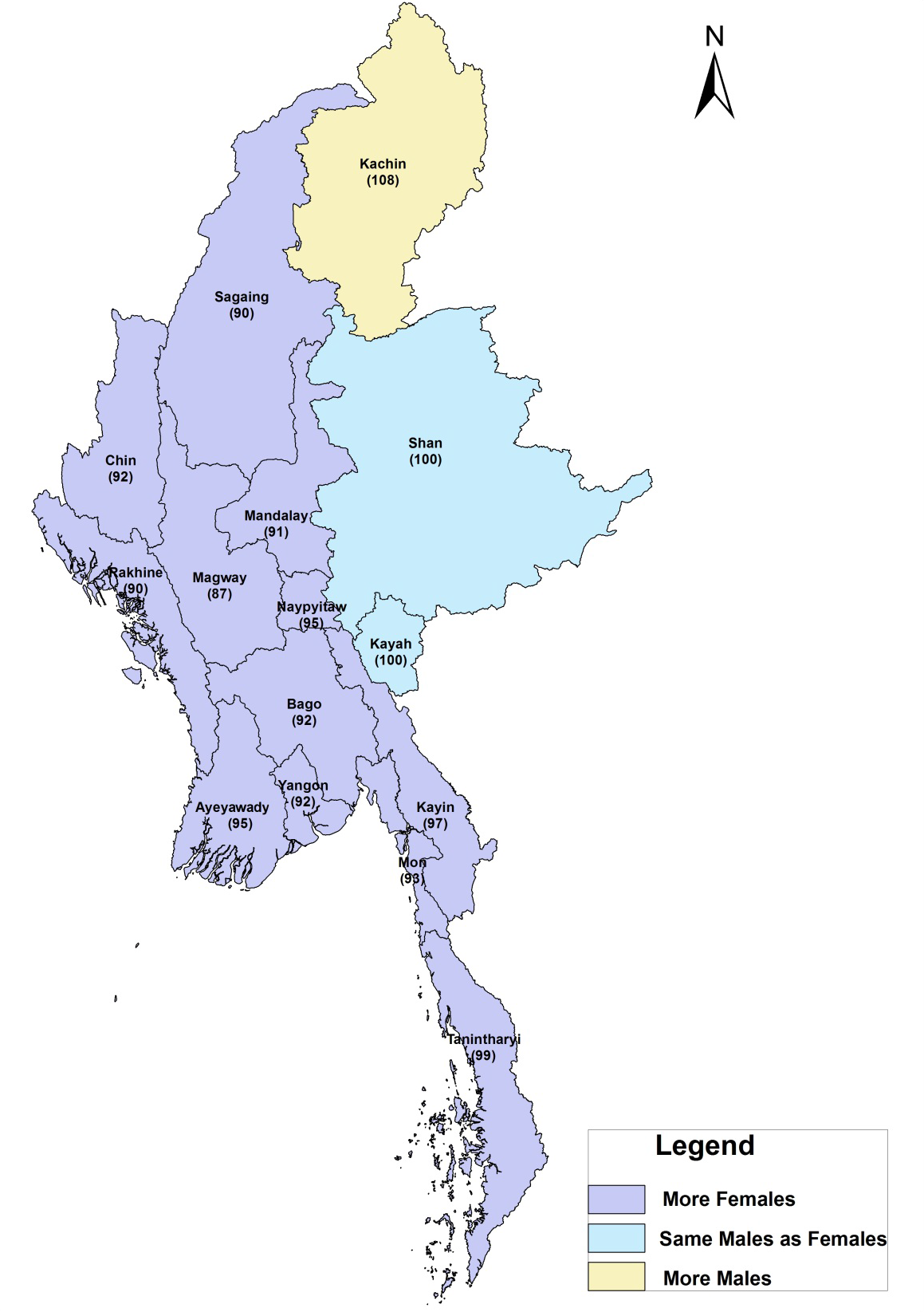 Females out-number males by 1.83 million. The sex ratio of the population (number of males for every 100 females) at the Union level is 93. In 1983 and 1973, the sex ratios were 98.6 and 98.8, respectively. At the State and Region level, the population of males exceeds that of females only in Kachin State (108 males for every 100 females). In Kayah and Shan States, there are equal numbers of both sexes. In the remaining 13 States and Regions, the census counted more females than males. The differences in the sex ratio in Myanmar may be attributed to migration and higher male mortality, starting from adolescence. These factors, however, need to be explored further.

Most of Burma’s 14 regions have female majority populations, in line with the demographics of other Southeast Asian countries. However, there are several outliers. Kachin State is the only region that has a higher proportion of males, perhaps due to the exodus of Kachin women into China? Or Chinese-influenced preferences for sons? Shan and Kayah States have equal proportions of males and females. 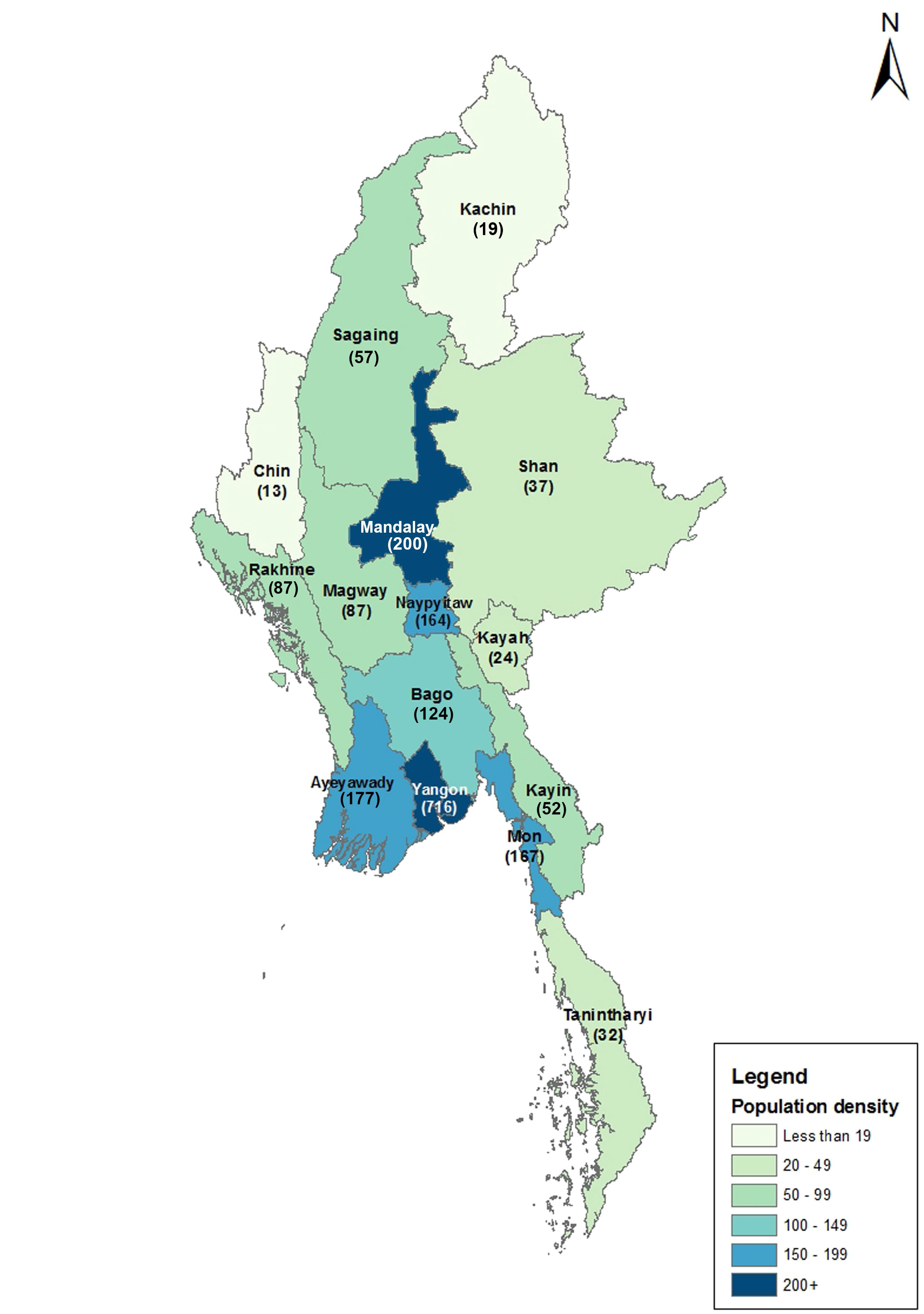 The Census results show that the population density is 76 persons per square kilometre. The most densely populated area is Yangon Region (716), followed by Mandalay Region (200). The least populated areas are Kachin State (19) and Chin State (13). 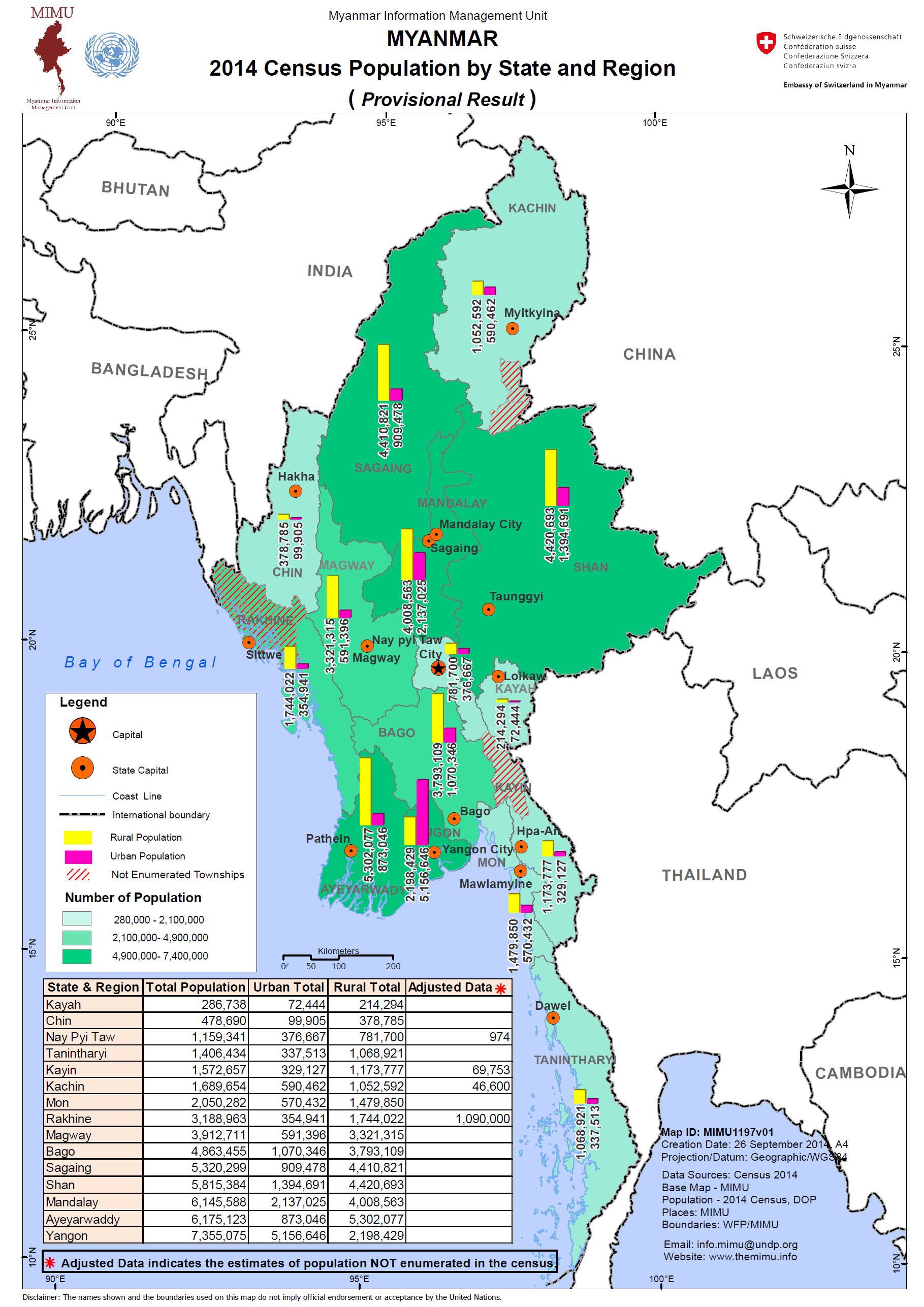 The Census results show that for every 100 persons in Myanmar, 70 persons live in rural areas and 30 persons live in urban areas. Yangon Region has by far the highest proportion of people living in urban areas at 70 percent, followed by Kachin at 36 percent and Mandalay at 35 percent. Ayeyawady Region has the largest proportion of rural population at 86 percent, followed by Magway Region at 85 percent, and Sagaing Region and Rakhine State at 83 percent each. 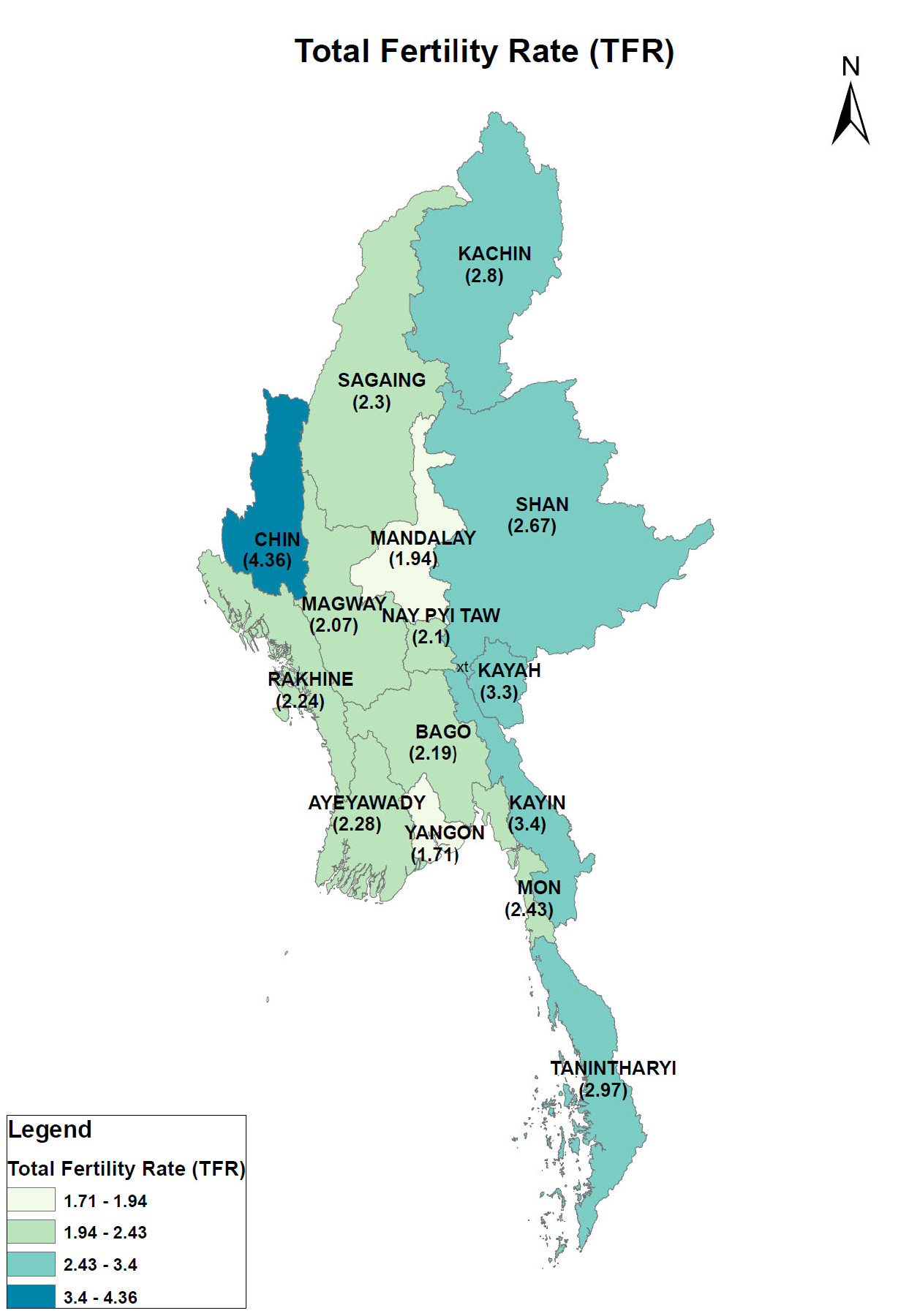 The Total Fertility Rate (TFR) is defined as the number of births a woman would have if she experiences the current observed age-specific fertility rates, and if she survives to the end of her childbearing age, which ranges from 15-49 years. Based on the information from the 2014 Census, the unadjusted fertility rate of Myanmar is 2.29 children per woman, while the marital fertility rate is much higher at 4.03. The increased age at first marriage and the relatively high proportion of young, unmarried women in Myanmar may be responsible for the low average number of children per woman in the population of reproductive age. The total fertility rate differs significantly by place of residence; it is lower in urban areas (1.8 and 3.6) and higher in rural areas (2.5 and 4.2). Fertility rates vary significantly by States and Regions; they are highest in Chin (4.4), Kayin (3.4) and Kayah (3.3) and lowest in Yangon (1.7) and Mandalay (1.9). 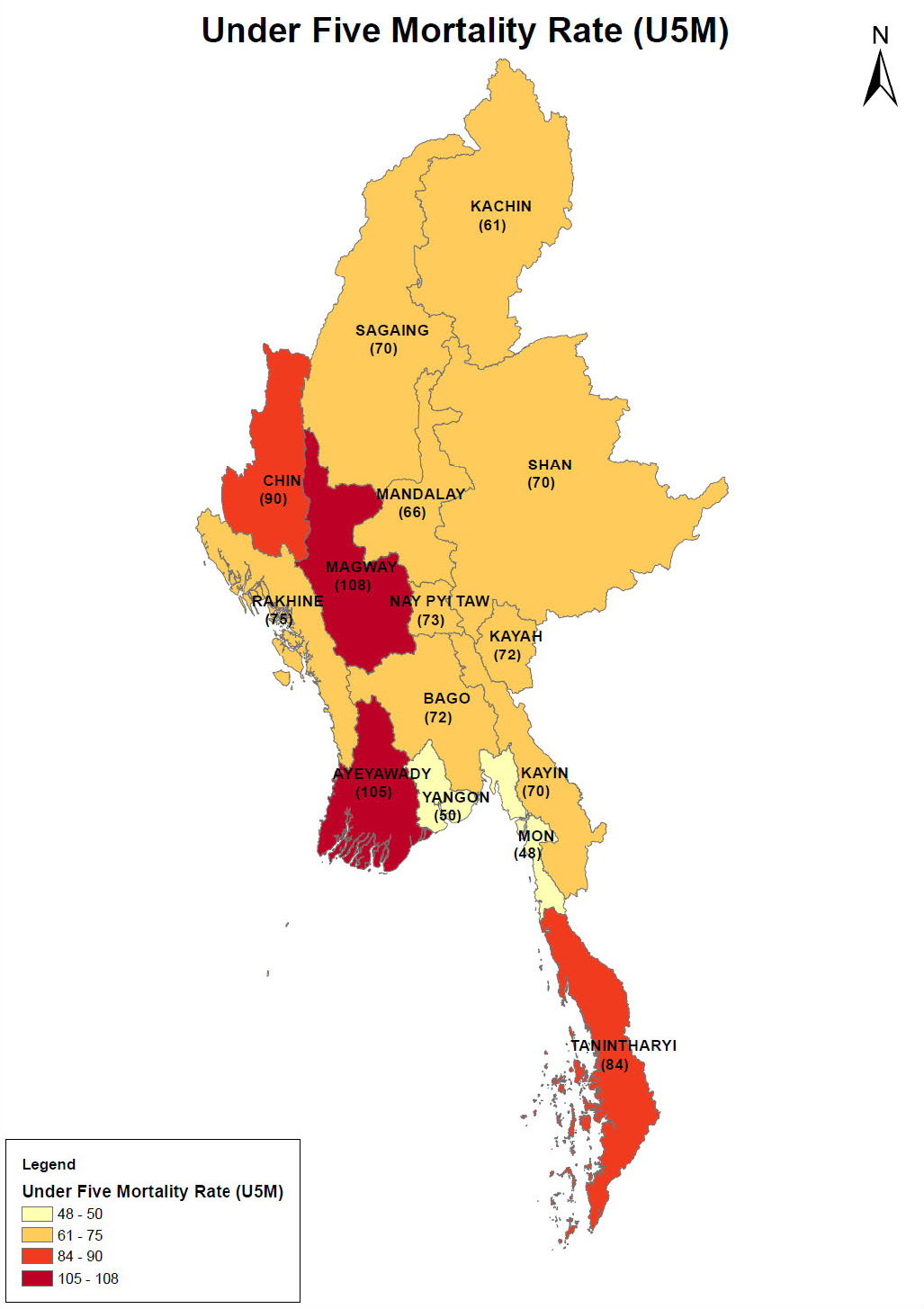 The under-five mortality rate is 72 at the Union level with the same pattern at both the State and Region level. The census shows that for every 1,000 children born in Myanmar, 62 die before reaching their first birthday. This rate is higher in rural areas (68) than in urban areas (41). The expectation of life at birth is 66.8 for both sexes. People born or who live in Yangon Region and Mon State are expected to live the longest at 71.2 and 71.7 years respectively.

According to World Bank data, this puts Burma between Haiti (73) and Laos (71), in the highest quartile of countries, populated mostly by sub-Saharan countries: 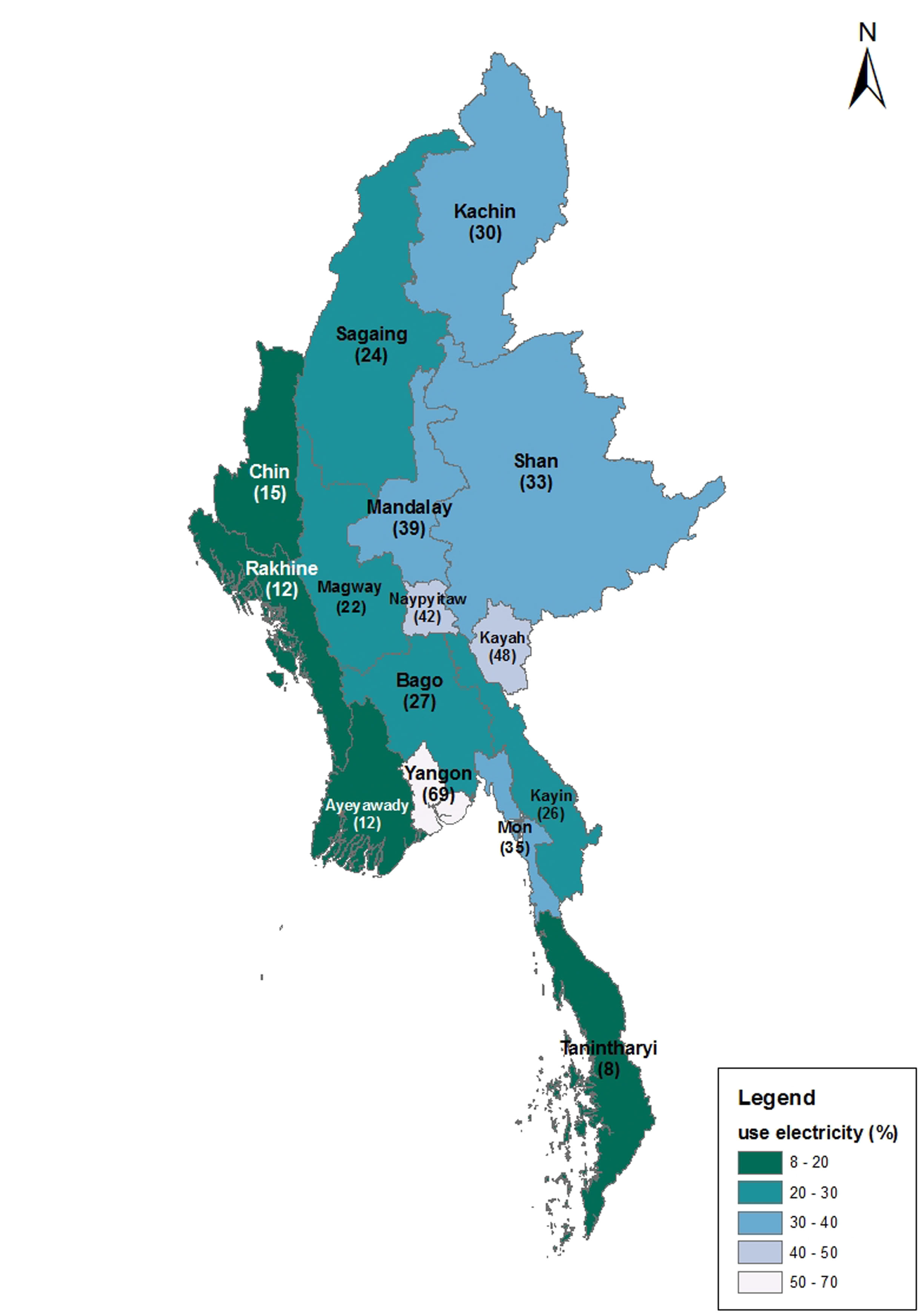 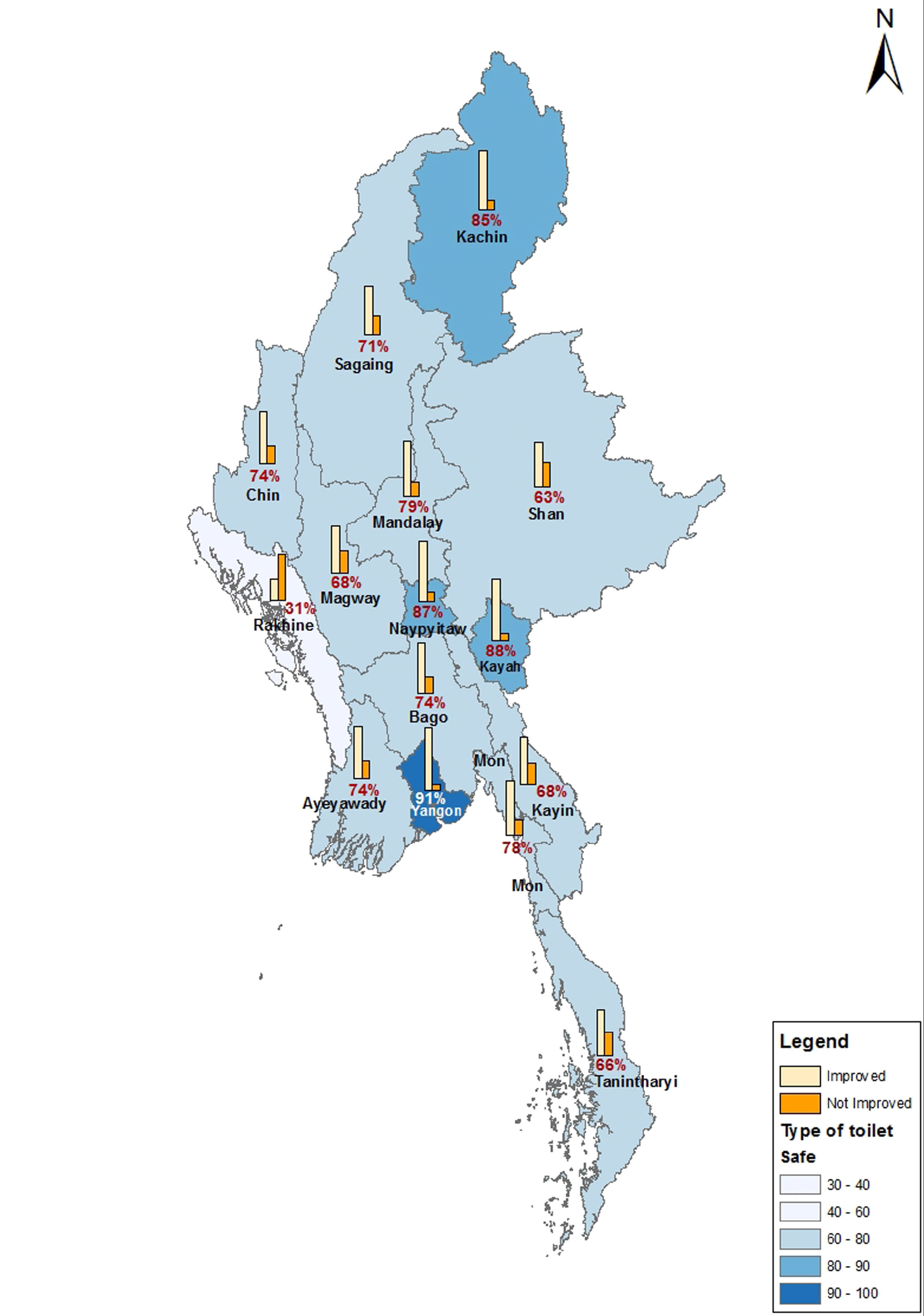 According to World Bank data, this puts Burma in the company of South Africa, Philippines and Vietnam: 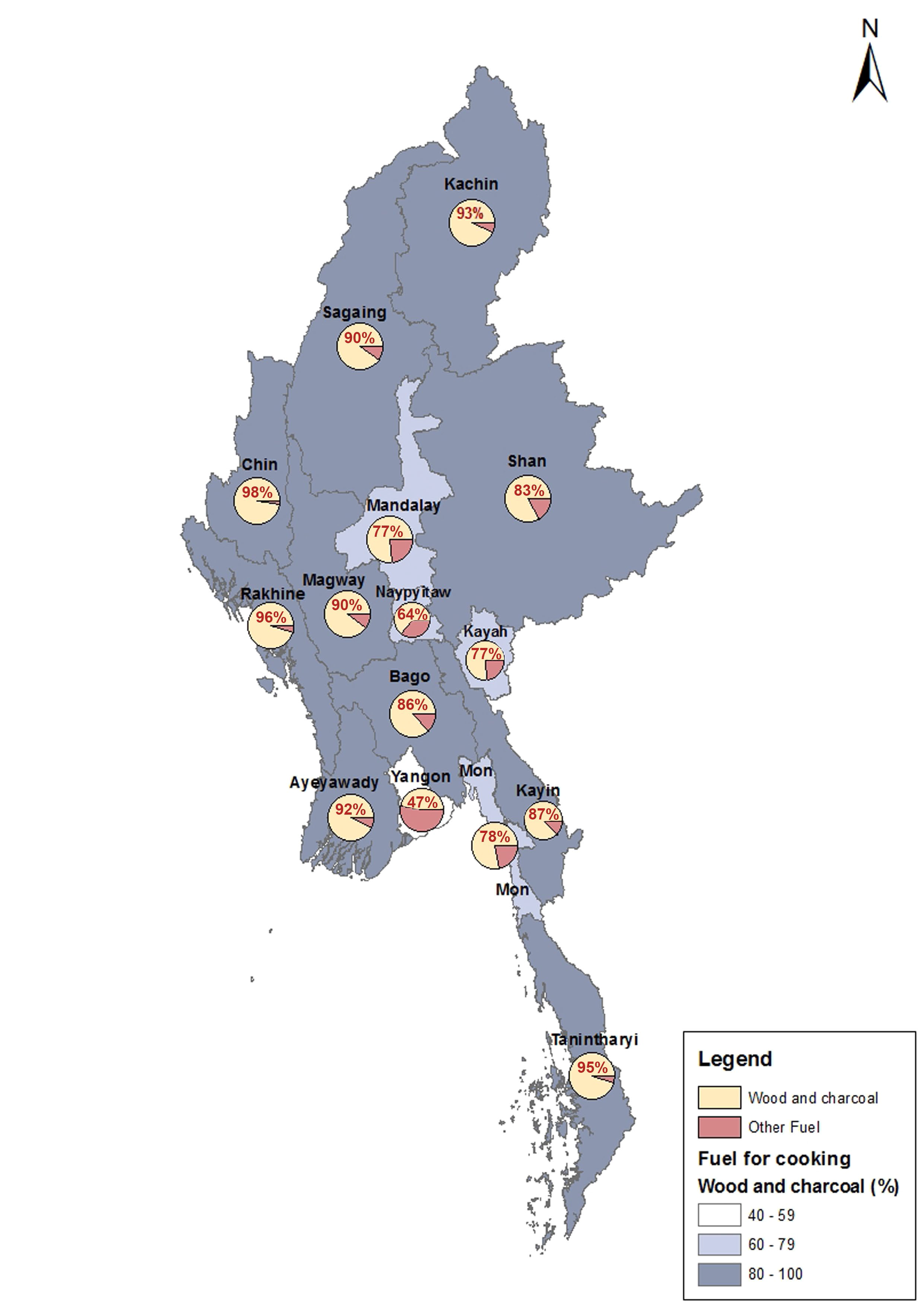 Full reports are available on the Ministry of Immigration and Population’s Department of Population website at www.dop.gov.mm/moip.