Not that mass pardons are unusual. In fact, mass amnesty is a regular occurrence in Burma, the continuation of a tradition firmly rooted in pre-colonial practices. Until the demise of the Konbaung dynasty, ordinary criminals were released from imprisonment during 3 Buddhist holidays: the Burmese New Year in April, the beginning of the Buddhist Lent in July, and the end of the Buddhist Lent in October, a symbolic act of merit and a gesture of the monarch’s compassion.

What makes this latest round so unusual is the number of Chinese individuals released, and that fact 9 former military intelligence officers were among the batch. This, despite public condemnation of the environmental crimes committed by the Chinese loggers.

It’s especially intriguing were the public lobbying efforts that the Chinese government made on behalf of the convicted, a direct contradiction of the basis of Burmese-Chinese relations. The Chinese-Burmese diplomatic relationship is based on a ‘veneer’ of non-interference. Both enshrine non-interference in each other’s affairs as a cornerstone in their policies toward each other. This has been commonly presented as China’s rationale in vetoing United Nations resolutions involving Burma.

In 2006, the Chinese Ministry of Commerce issued a press release entitled “China to maintain non-interference policy on ties with Myanmar,” clearly emphasizing its commitment to this, based on a 1954 joint declaration:

As late as February 2015, the Chinese Foreign Ministry’s spokesman Hong Lei, in response to questions about Burmese-Kokang clashes, said this at a press conference:

“China is committed to non-interference in other countries’ domestic affairs, consistently respects the sovereignty and territorial integrity of Myanmar and forbids any organization and individual conducting activities that undermine China-Myanmar relations or stability of the border area on the Chinese territory.”

And I call this a veneer because the reality on the ground is far more complicated. For instance, there’s documented evidence of Chinese authorities funding and supporting rebel groups along the Burmese-Chinese border (the most visible of them of whom are offshoots of the Communist Party of Burma, including the United Wa State Party).

A Burmese cartoon mocking the recent release of convicted Chinese loggers. On the left, a Burmese man laments “It should be 20 years of jail time per teak tree [harvested]…” On the right, a Chinese man exclaims “For the sake of bilateral friendship, it’s only 8 days [of jail time]!”

What is especially ironic is that Chinese state-run media has even lamented on the depletion of Burma’s forests. A Xinhua report in August 2012 noted that Burma’s forest coverage had been reduced to 20%, down from 70% during the Konbaung dynasty, and 51% as late as 2005. It also pointed to illegal logging as a main cause:

“The main root cause of forest depletion was due to excessive cutting down of trees, illegal logging, less replanting, changing cultivation system and increase use of firewood.”

Timeline of the Logging Case

March 26, 2014: A data report by the Environmental Investigation Agency finds that almost 3/4 of Burma’s timber trade is illegal. [source]

April 1, 2014: The Burmese government imposes a ban on raw timber exports. [source] This ban is also reported on Chinese state run media. [source] The discrepancy is estimated to be worth US $6 billion. [source]

January 4, 2015: Myawaddy, a military-run newspaper, announces that 146 people, including 126 Chinese nationals, were arrested in raids on illegal logging in northern Kachin State. [source]

January 19, 2015: The Chinese Foreign Ministry announces that it has requested the Burmese government protect the protect the safety and legitimate rights of Chinese nationals who were arrested over illegal logging. [source]

July 23, 2015: Xinhua publishes an op-ed piece pressing Burma to reconsider the sentencing. It questions the issued sentences, especially the severity, the sentencing’s “one-size-fits-all approach,” and even the “impartiality” of the court. [source] . The Chinese state-run Global Times also writes an editorial entitled “Harsh sentence on Chinese loggers unfair,” claiming that “Western media are trying to foment discord between China and Myanmar, claiming China is looting local resources.” [source]

July 30, 2015: The 155 Chinese nationals are included in the list of 6,966 political prisoners to be freed as part of Thein Sein’s Waso Full Moon Day pardon. [source] The Chinese Foreign Ministry issues a statement. [source]

July 31, 2015: The Chinese nationals are released from jail and sent back to Yunnan. [source]

The developments in the Chinese logging case represent clear discrepancies  in other domestic cases involving foreign nationals. After all, this year, we’ve seen 2 high profile criminal cases pursued against a New Zealander and a British citizen.

This March, a New Zealand national was sentenced to 2 years of hard labor under the Religion Act, which is used to prosecute anyone who tries to insult or tarnish any religion. His crime: creating a promotional poster for the VGastro bar that featured an image of the Buddha wearing headphones.

In another case, a British national, U Uttara (known as the London Sayadaw) is currently facing charges under the 1990 Law Relating to the Sangha Organization and penal code, after his arrest following the raid on the Mahasantisukha Monastery. His crime: illegal trespassing. 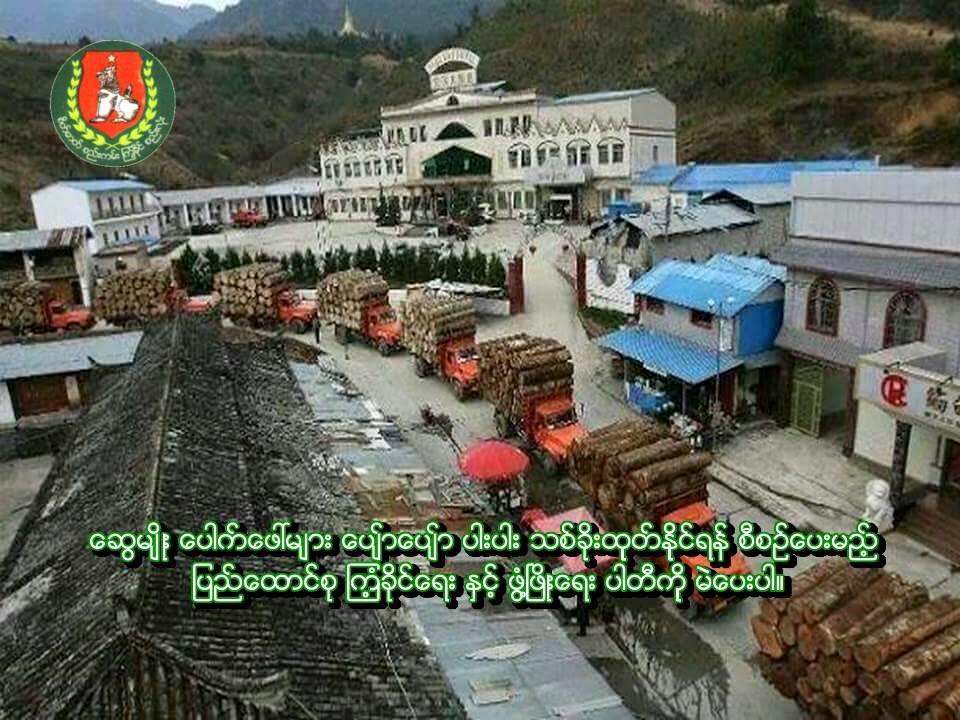 “Vote for the USDP to help arrange for our Chinese kin to happily smuggle out our country’s timber!”

Neither of the aforementioned cases has been successfully handled through diplomatic channels. Both are relatively minor infractions in the grand scheme of things. Of course they touch on political sensibilities, but so does the Chinese one. There is palpable nationwide anger over the destruction of forests in recent years. Yet the Chinese case was the only one so swiftly dealt with, with the convicted spending a grand total of 8 days in jail.

In many ways, this development is important for 4 reasons: