As descendants of the Old Mon script, both Burmese and Lanna can and are used to transcribe Pāḷi, the liturgical language of Theravada Buddhism, akin to Latin’s role in Roman Catholicism. In fact, for hundreds of years, both Burmese and Lanna have historically served as vehicles of knowledge transfer in Mainland Southeast Asia, used in to transcribe Pali texts and religious commentaries on inscriptions and manuscripts.

I explore the conventions of Pali transcription in both Lanna and Burmese below. The similarities almost render Lanna transcriptions readable to a literate Burmese speaker.

Note: You may not be able to view the Tai Tham/Lanna letters in the text. The Tai Tham font I’ve used is Lanna Alif (can be downloaded here), which removes the stylistic flourishes commonly found in Lanna writing. There’s also an ambitious project to create a open source Tai Tham font, Hariphunchai, at hariphunchai.unifont.org.

The chart below shows all of the Pali consonant forms and their corresponding forms in the Burmese and Lanna scripts. I’ve organized the chart using the traditional Burmese alphabetic order and included the letter “a” (which is technically a vowel). Burmese letters are sorted into 6 groups called vagga in Pali. The Burmese form is to the left and bolded, while the Lanna form is to the right and unbolded. 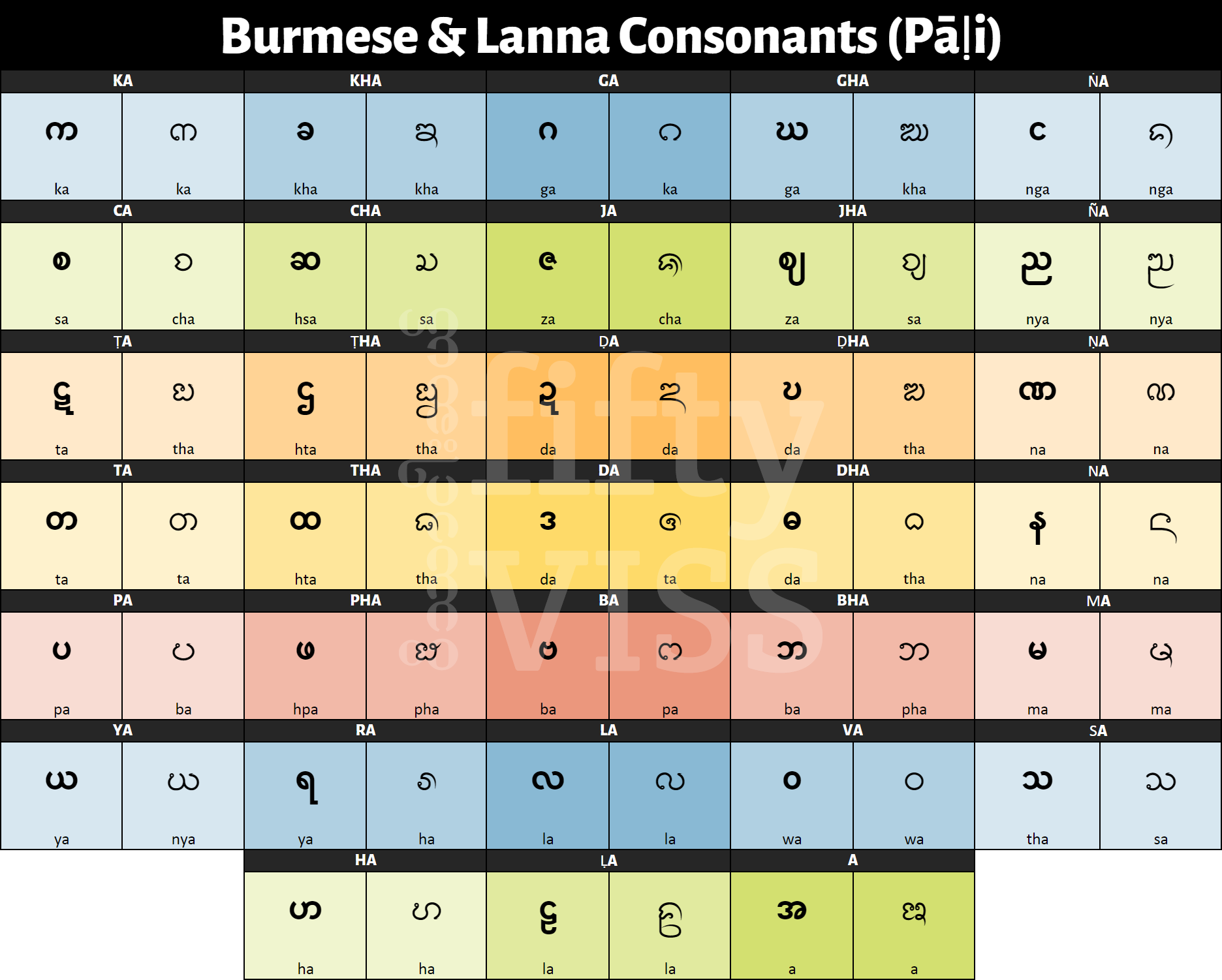 (For non-Indic vocabulary, Burmese uses a virama diacritic [အသတ်] to represent a consonantal final, whereas Lanna uses consonant stacking across the board).

Both Burmese and Lanna share rules governing consonant stacking. The main rule is that both consonants must be part of the same consonant group (vagga) in order for stacking to occur.

The table below is an exhaustive list of all the possible stacked consonant combinations, grouped by vagga:

There are however, some minor differences in how consonant stacking is realized in Burmese, as compared to Lanna:

Unlike Thai and Lao, Burmese and Lanna both possess independent vowel symbols, which show obvious semblance to one another. When used with consonants, vowels are indicated in the form of diacritics placed above, below, to the left and to the right of the modified consonant. Below is a chart of Pāḷi vowel transcription in both the Burmese and Lanna alphabets: 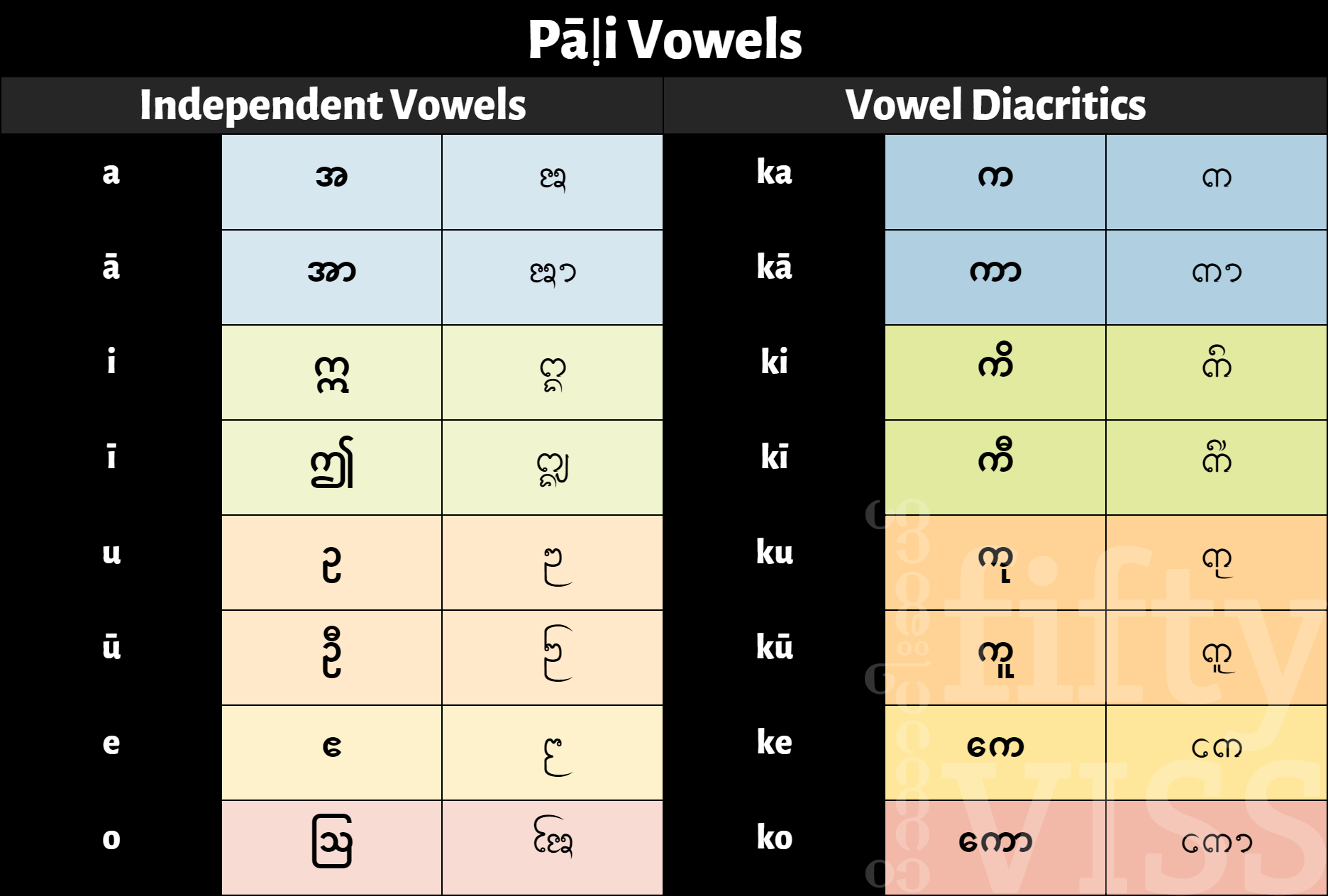 Below, I’ve compared Burmese and Lanna transcriptions of standard Pāḷi recitations used in Theravada Buddhist ceremony. The samples indicate a clear relationship between the 2 written scripts, especially with respect to consonant stacking.

Homage to the Buddha (Vandana)

I pay homage to the Buddha who is an Arahat and the Fully Self-Awakened One.

9 Attributes of the Buddha 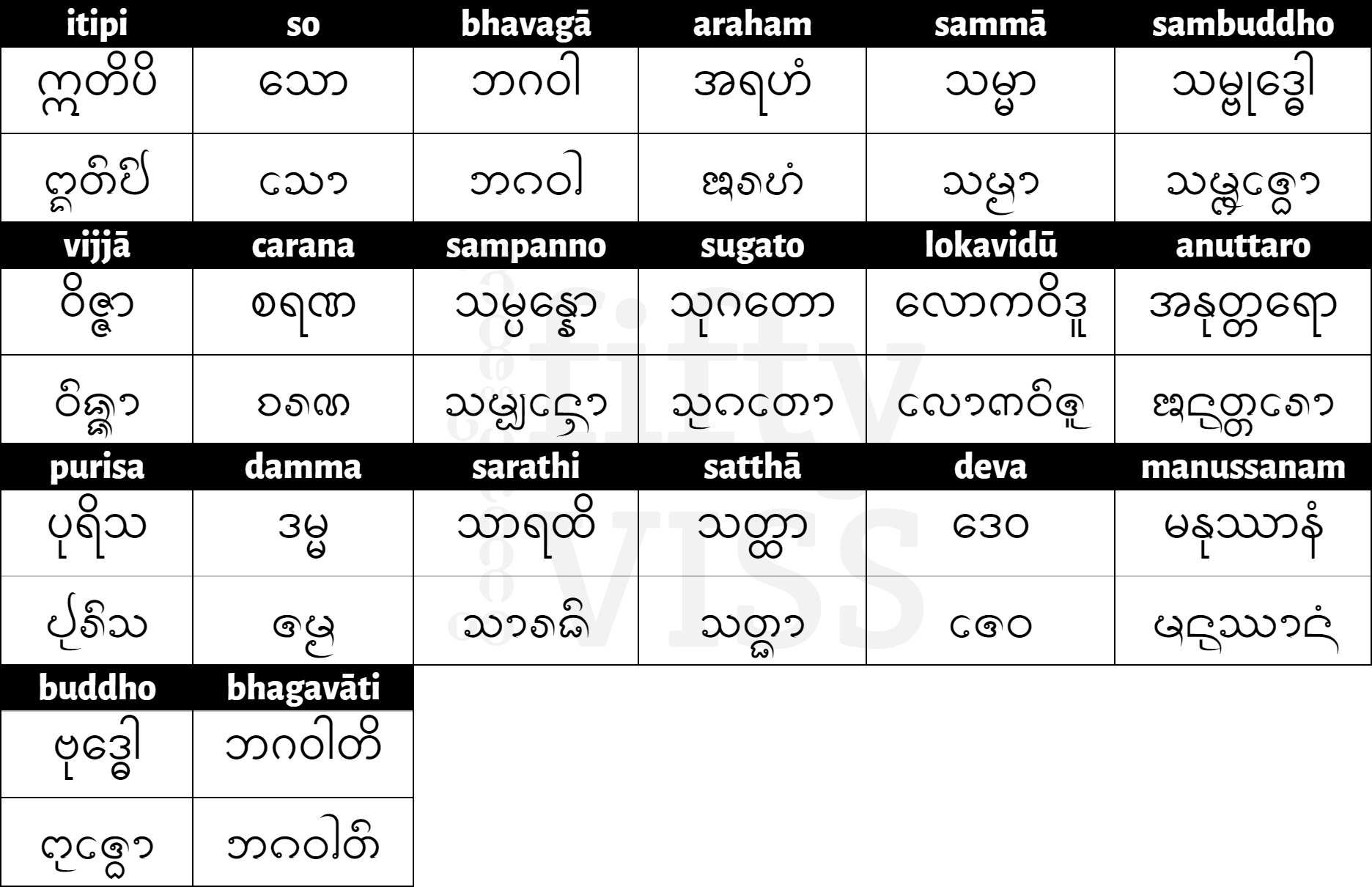 The Lord is indeed thus: an Arahat; Completely self-awakened;
Perfect in knowing and doing (knowledge and conduct); Going along well (well gone); One who can see all worlds;
An incomparable trainer of those ready for training;
Teacher of gods and men; Awake; Exalted.

6 Attributes of the Dhamma

The Dhamma is well-expounded by the Exalted One,
Visible here and now, timeless,
Inviting all to come and see, leading onward,
To be seen by the wise each for themselves.

9 Attributes of the Sangha 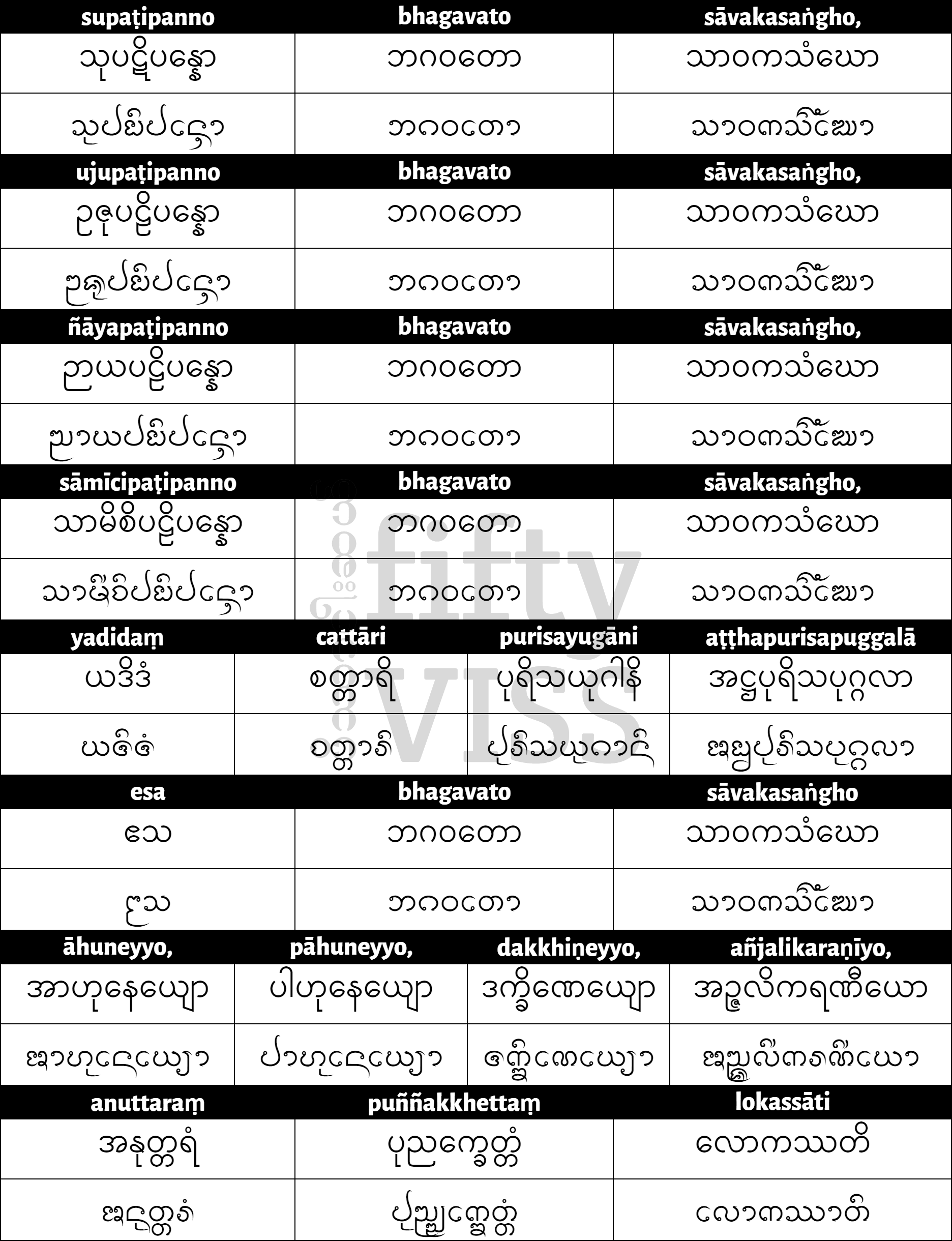 3 thoughts on “How to transcribe Pāḷi in Lanna and Burmese”