Since the election of the 330 odd Pyithu Hluttaw (People’s Assembly) representatives (MP’s) two years ago, I haven’t seen much in the actual composition of Burma’s lower house, a look at the members’ demographic data, aside from their party affiliation. Fortunately, the Pyithu Hluttaw website (pyithuhluttaw.gov.mm) now has biodata for all 314 of the sitting Pyithu Hluttaw MP’s. 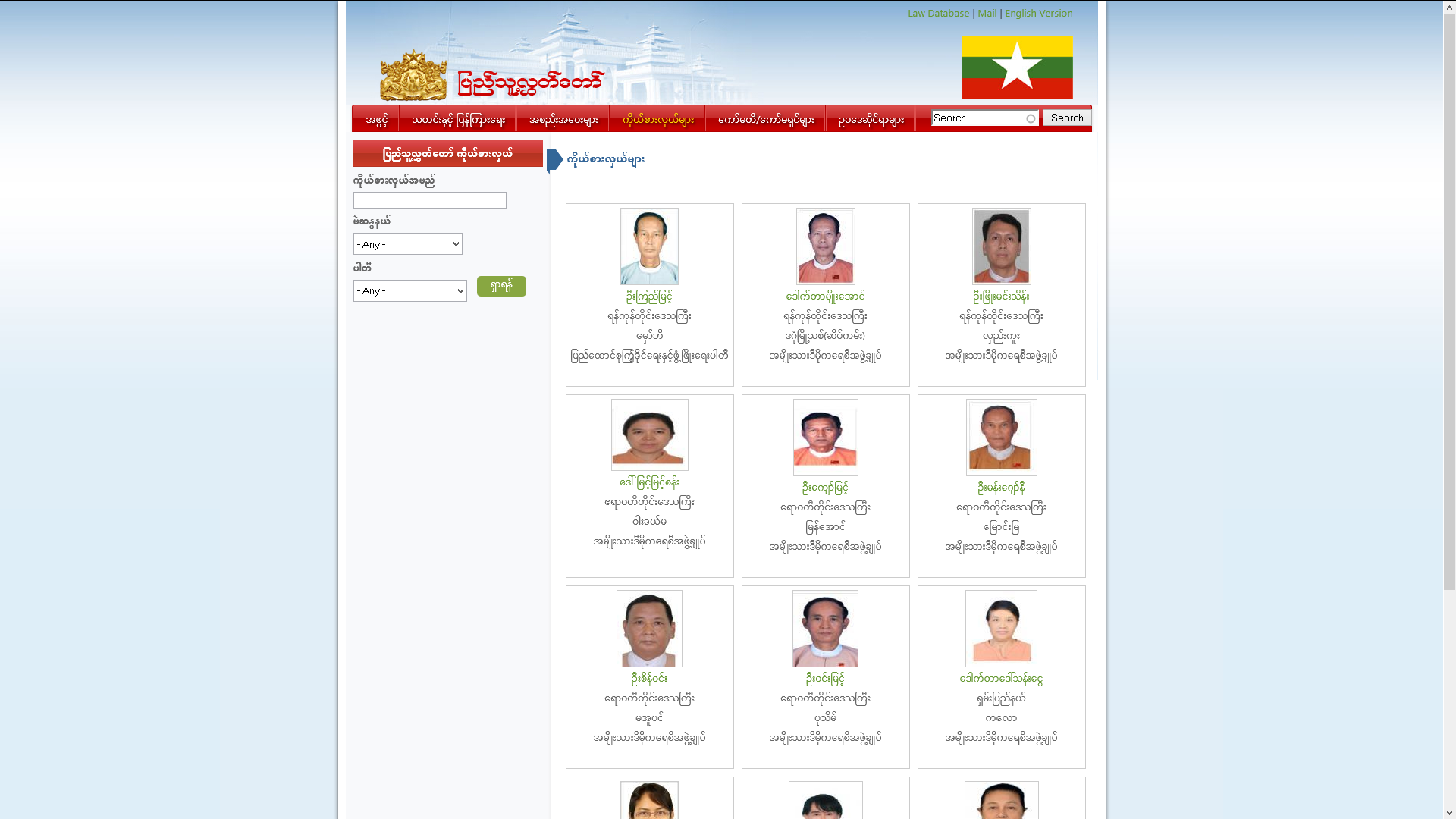 After much data manipulation and cleanup over the past few days (lucky for me, Excel 2013 supports Burmese in Unicode, but it was a hassle converting all this Zawgyi text into Unicode), I was able to extract some interesting tidbits from all 314 MP’s in terms of family size, ethnic self-identification, religious affiliation, etc.  Just as a note: officially, 330 seats are electable, but for various reasons (including the recruitment of MP’s to other public offices, cancelled elections, and disqualification by the Union Election Commission, etc.) , 16 seats remain vacant.

The following is an analysis and demographic profile of members in the 1st Pyithu Hluttaw.

A quick look at the Pyithu Hluttaw

First, a quick overview of the Pyithu Hluttaw. It’s the lower house of Burma’s national parliament, the Pyidaungsu Hluttaw (Union Assembly) and consists of 440 seats. 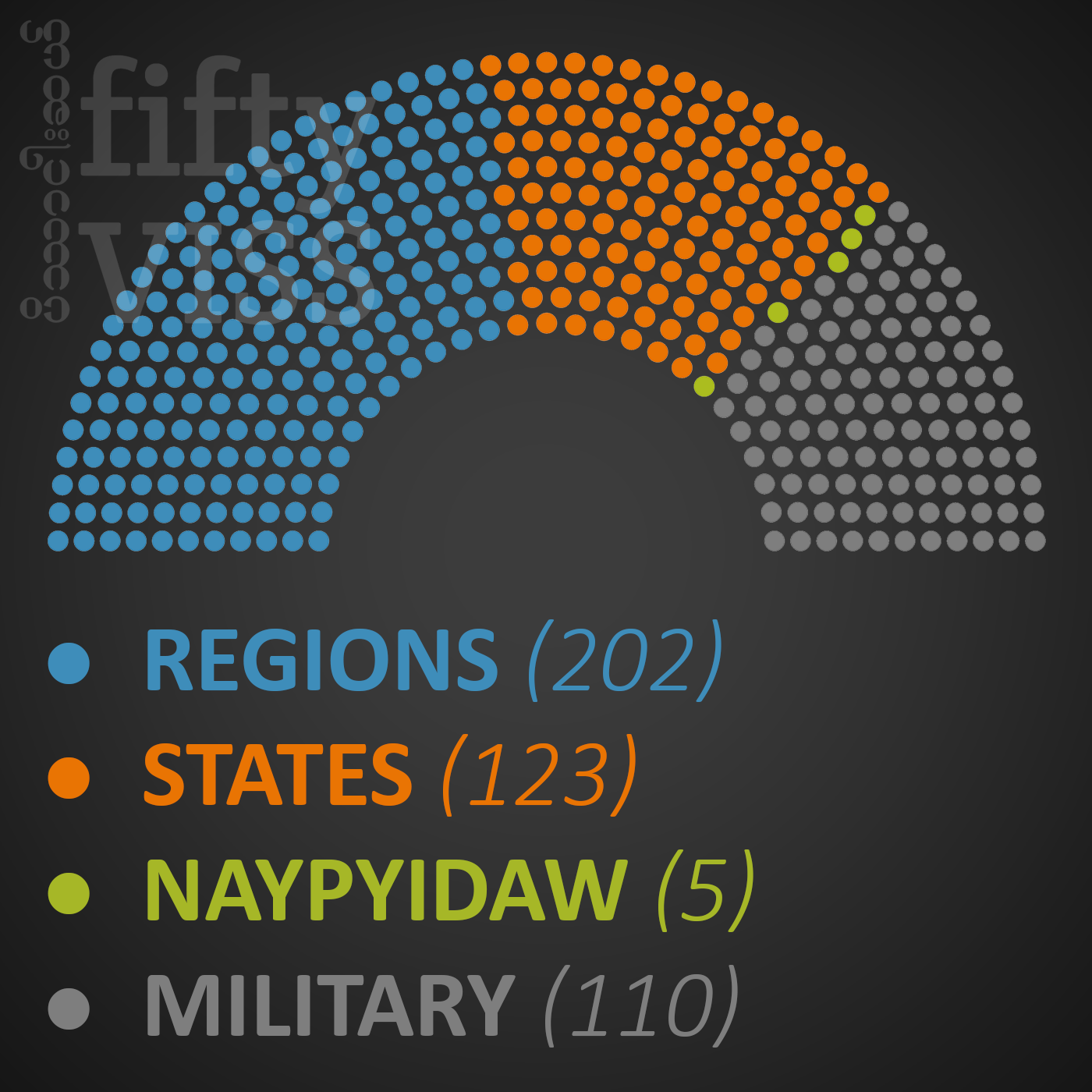 Composition of the 440 seat Pyithu Hluttaw

330 of Pyithu Hluttaw seats (75%) are up for grabs via election, while 110 (25%) are military appointments, recruited from the Defense Services Personnel (DSP). Burma’s subdivisions are primarily ethnic-based: Burman-majority areas are subdivided into 7 “Regions,” (တိုင်းဒေသကြီး, taing dethagyi) while ethnic minority-majority areas are divided into 7 “States” (ပြည်နယ်, pyi ne). Altogether, regions hold 202 (46%) of the Pyithu Hluttaw seats, states 28%, and the military 25%. Naypyidaw, as the national capital, is constitutionally entitled to seats, and has 1% of Pyithu Hluttaw seats. 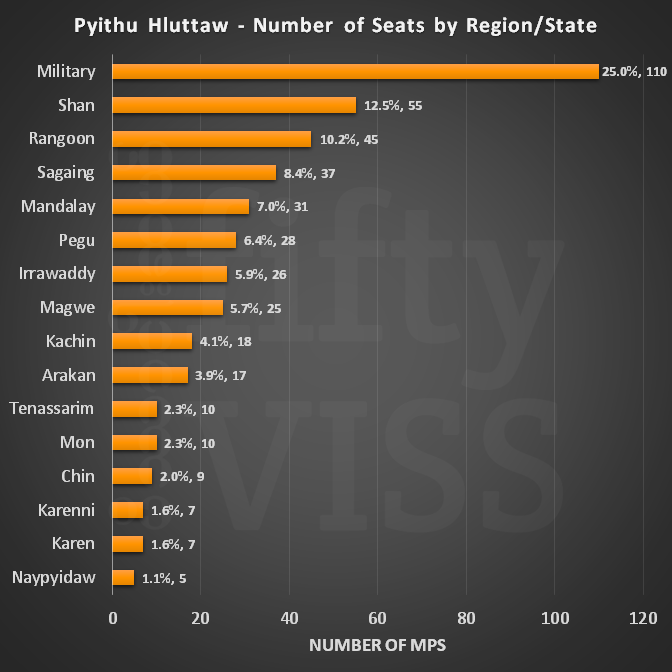 If viewed by region/state, the military holds twice as many seats as the most well-represented state/region, Shan State. Rangoon Region has the 2nd largest number of seats, followed by Sagaing, Mandalay, Pegu, Irrawaddy, and Magwe, all Burman regions. 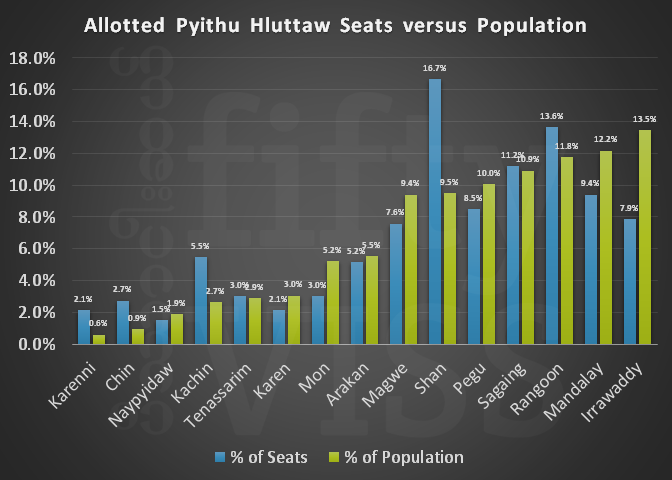 The Pyithu Hluttaw is represented proportional to population (akin to the American House of Representatives), while the upper house, the Amyotha Hluttaw (National Assembly) is not. In actual practice, each defined “township” (မြို့နယ်, myo ne) acts as one constituency (မဲဆန္ဒနယ်, me hsanda ne), entitled to one Pyithu Hluttaw seat. Most of the demarcated township boundaries date to the British era. In looking at how “representative” the Pyithu Hluttaw is, I crunched some numbers. I compared the number of contestable seats per state/region with population of each respective state/region, provided by the Ministry of Immigration and Population’s 2012 estimates (link).

It’s clear that there are quite a few winners from the way the seat designation works. Overall, several ethnic minority states benefit from this allotment: Shan State benefits tremendously, with 16.7% of all contestable seats even though it only has 9.5% of Burma’s population, while Kachin State has 5.5% of all seats, with only 2.7% of the population. On the other end of the spectrum, Irrawaddy and Mandalay Regions lose out. Irrawaddy Region has 13.5% of the country’s population, but only 7.9% of seats; while Mandalay Region has 12.2% of Burma’s population, yet only 9.4% of all available seats. 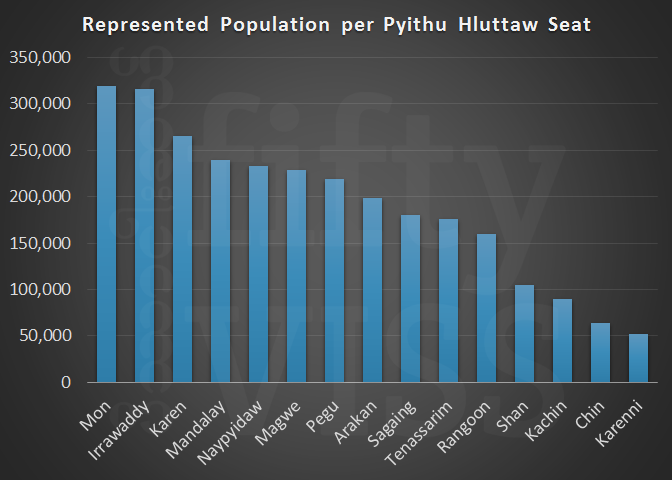 In calculating how many constituents each Pyithu Hluttaw seat claims to represent, the disparity becomes even more apparent, with the numbers ranging from 50,000 persons to over 300,000 persons per seat. Mon State and Irrawaddy Regions are the most underrepresented, with each Pyithu Hluttaw seat representing almost 320,000 constituents. On the other hand, Karenni, Chin, Kachin and Shan States benefit disproportionately, with each of the respective states’ seats representing between 50,000 to 100,000 constituents. 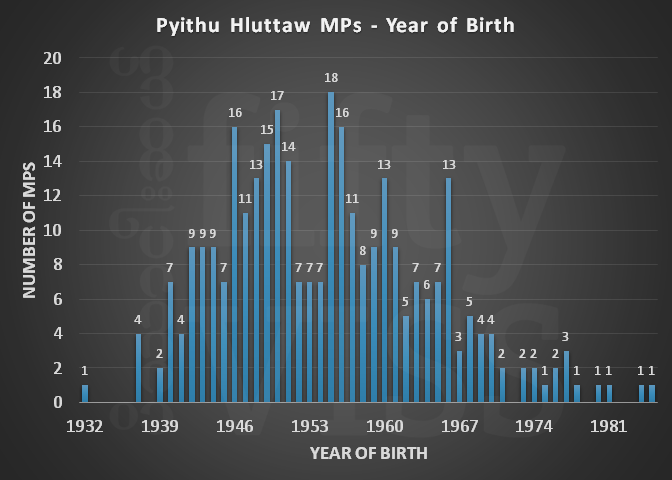 The average age of a Pyithu Hluttaw MP is 59, born in 1955. Most were born between the 1940s and 1960s, meaning they were likely children when Burma’s brief parliamentary period officially ended in 1960. 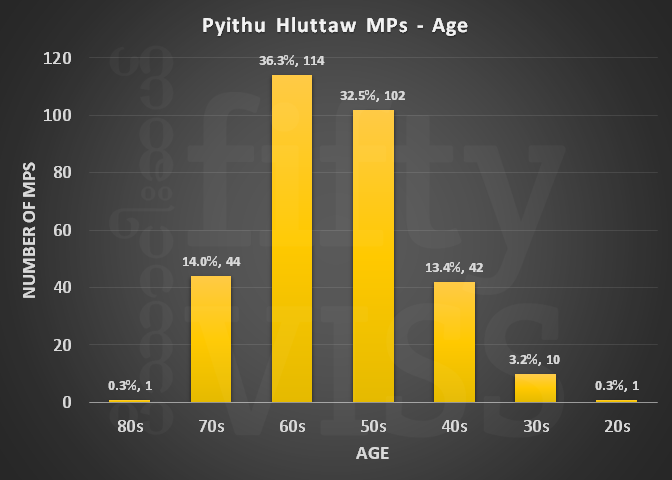 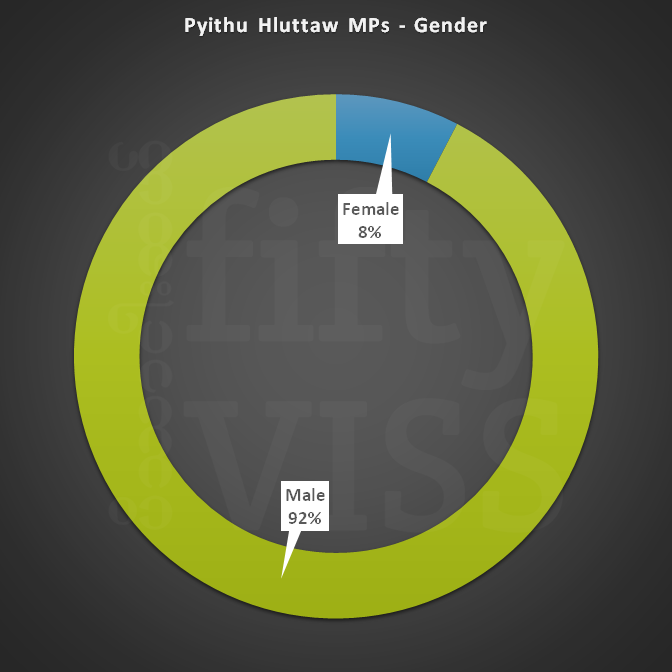 A disappointing 8% of Pyithu Hluttaw MP’s are female, representing only 24 of the 330 parliamentary seats. Of those 24 female MP’s, half are members of the National League for Democracy (NLD), elected in 2012. For comparison, 51% of the Burmese population is female. 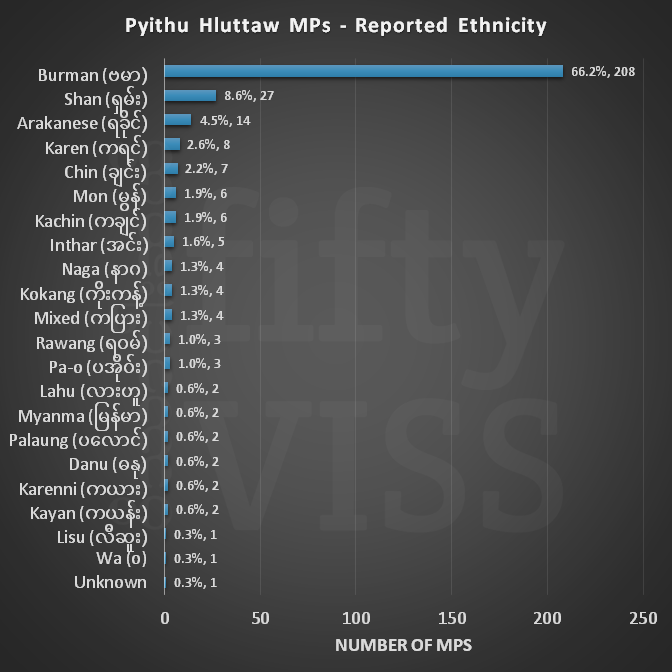 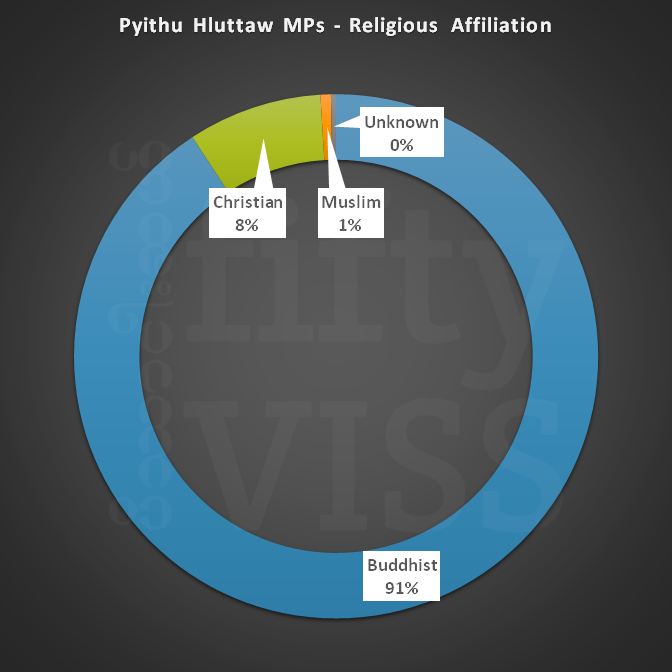 Buddhists were the most numerous in the Pyithu Hluttaw, occupying 285 of the seats. Only 26 seats were occupied by Christians, all of whom are from ethnic minorities. 2 seats were occupied by Muslims, Aung Zaw Win (ဦးအောင်ဇော်ဝင်း) and Shwe Maung (ဦးရွှေမောင်). Both are USDP politicians who represent constituencies in Arakan State. At the time of analysis, the religious affiliation of 1 member was unknown. 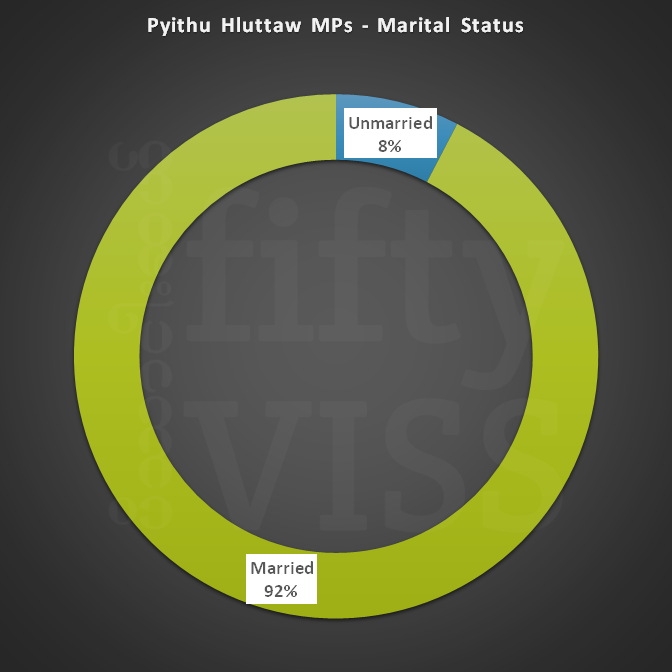 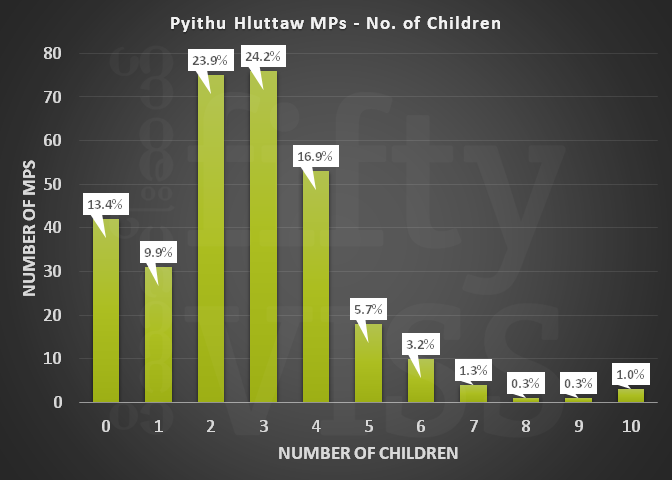 The average Pyithu Hluttaw MP have 2.69 children. Among married MP’s, the average is 2.91. About 13.4% have no children, while 10% have 5 or more children. A whopping 3 MP’s have 10 children each: Aik Mon (ဦးအိုက်မုန်း) of Mantong Constituency (မန်တုံ), Win Naing (ဦးဝင်းနိုင်) of Shwegu Constituency (ရွှေကူမြို့နယ်), and Myint Shwe (ဦးမြင့်ရွှေ) of Waw Constituency (ဝေါ).

Ethnic minority MP’s tend to have larger families, averaging 3.40 children. Burman MP’s have about 2.65 children. With regard to religion, Buddhist MP’s have on average, 2.76 children, while non-Buddhist ones have an average of 4.28 children. 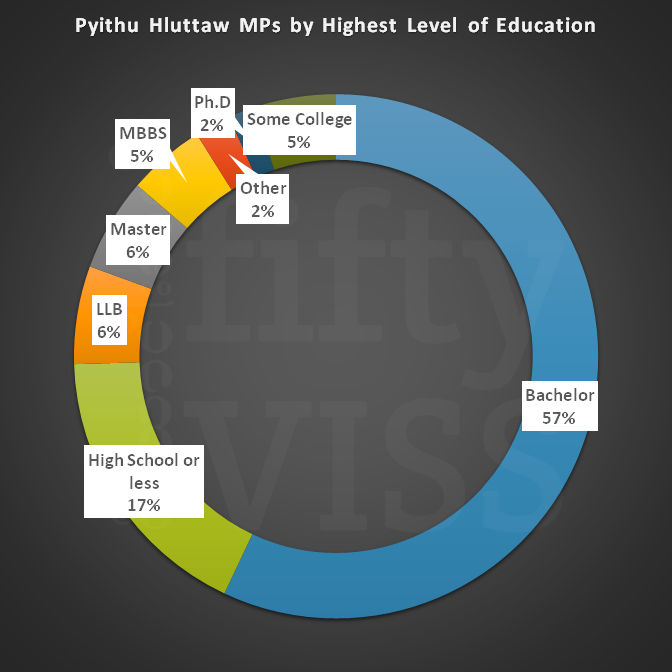 All of the MP’s provided information on their highest educational attainment. 57% had Bachelor’s degrees, 17% had a high school education or less, 6% had law degrees (LLB), 6% had Master’s,  5% had medical degrees (MBBS), and 5% had some college education. 17 MP’s (5.4%) were reported to be graduates of the Defense Services Academy (DSA), Burma’s premier military academy. 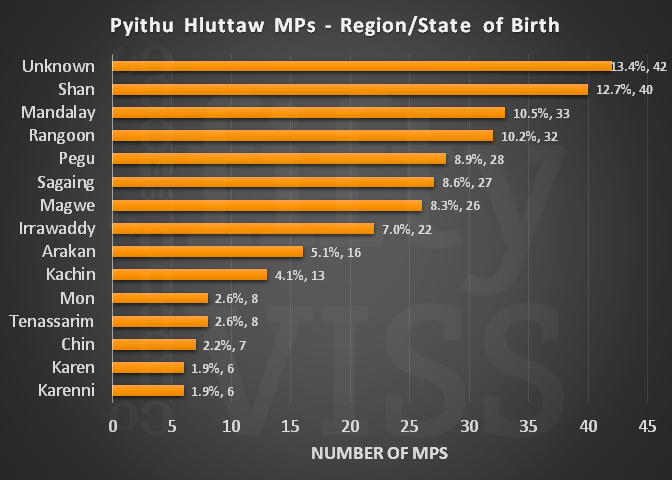 Birthplace was tricky to determine, given that the level of detail provided in the birthplace varied across the board. Some MP’s provided information on their exact address of birth, including ward, while others provided only a village name, without specifying the township, district or region/state (and Burmese villages tend to use common names, making it hard to ascertain their actual birthplace). For these reasons, I couldn’t positively determine the birthplace of 13.4% of Pyithu Hluttaw MP’s. Of the ones I could determine, most were born in Shan State, followed by Burman regions: Mandalay, Rangoon, Pegu Sagaing, Magwe, and Irrawaddy.

All this to say, the typical Pyithu Hluttaw MP looks like this:

What does this mean?

Demographics, when understood in a vacuum, have no meaning. However, given that these MP’s are legislators making policy on a national level, understanding where they come from is important. As Burma (hopefully) moves toward a more democratic system of governance,  it will become increasingly important to understand where these lawmakers are from, as Burma’s nascent parliament begins to mature.

More importantly, it raises some important questions. The average lawmaker doesn’t quite look like an average voter. And does this really matter? Why is female political participation so low when Burmese women have reached the height of educational success (e.g., women make up most of the graduating classes in medical school and top-ranked matriculation scorers).  Are quotas or reservations necessary for minorities and women to ensure their political representation, especially when 50+ other countries have implemented them?