This past week, I switched over to a new Android phone, the much touted Google Nexus 5, a Google-branded smartphone bearing the latest version of the Android OS, version 4.4 (aka Kitkat). I’ve been impressed with the phone’s build and software capabilities, but the real gem I unearthed was that it has full support for the Burmese language, while browsing through my music library. That’s right, Android 4.4+ now has support for Burmese. 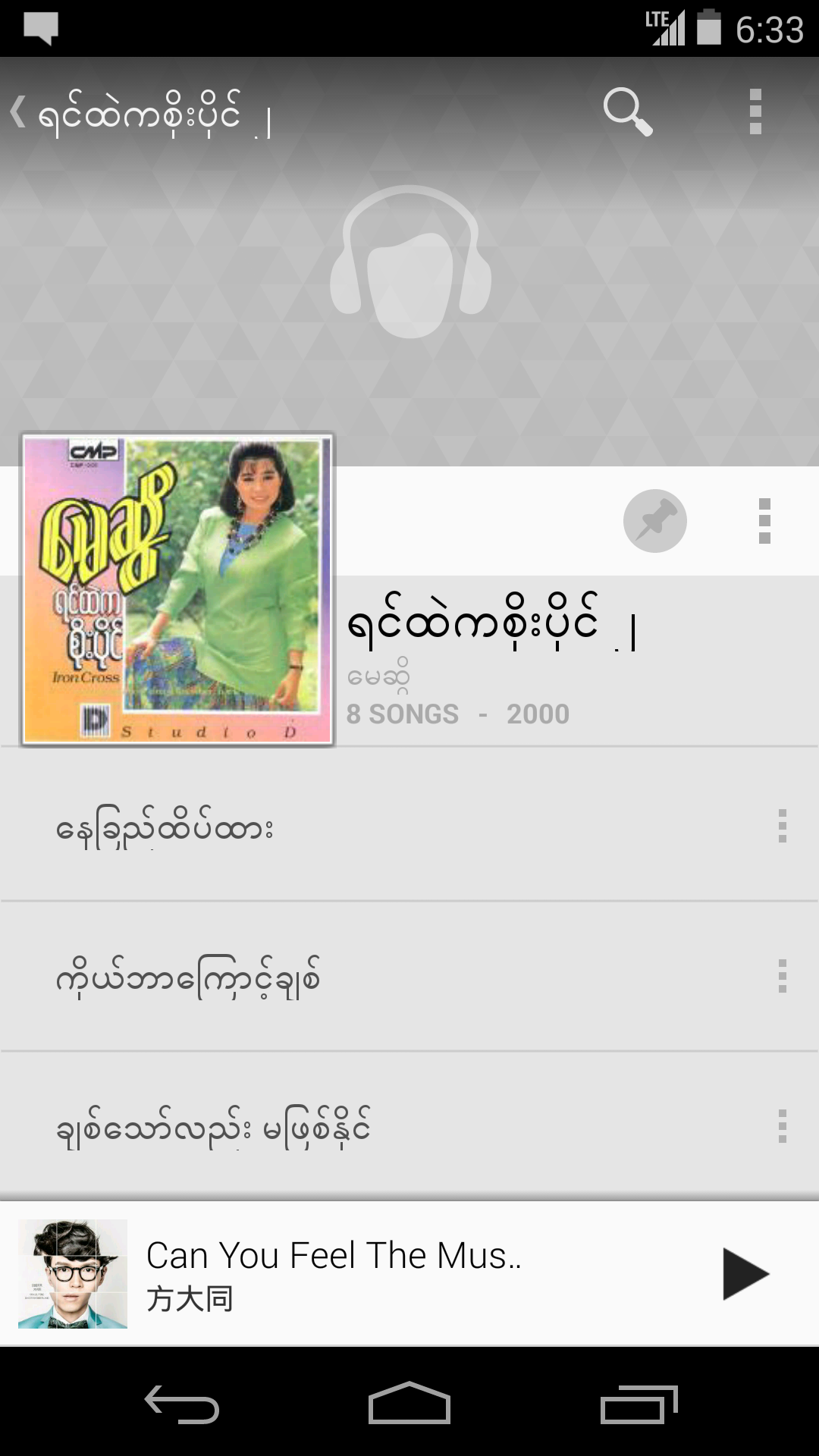 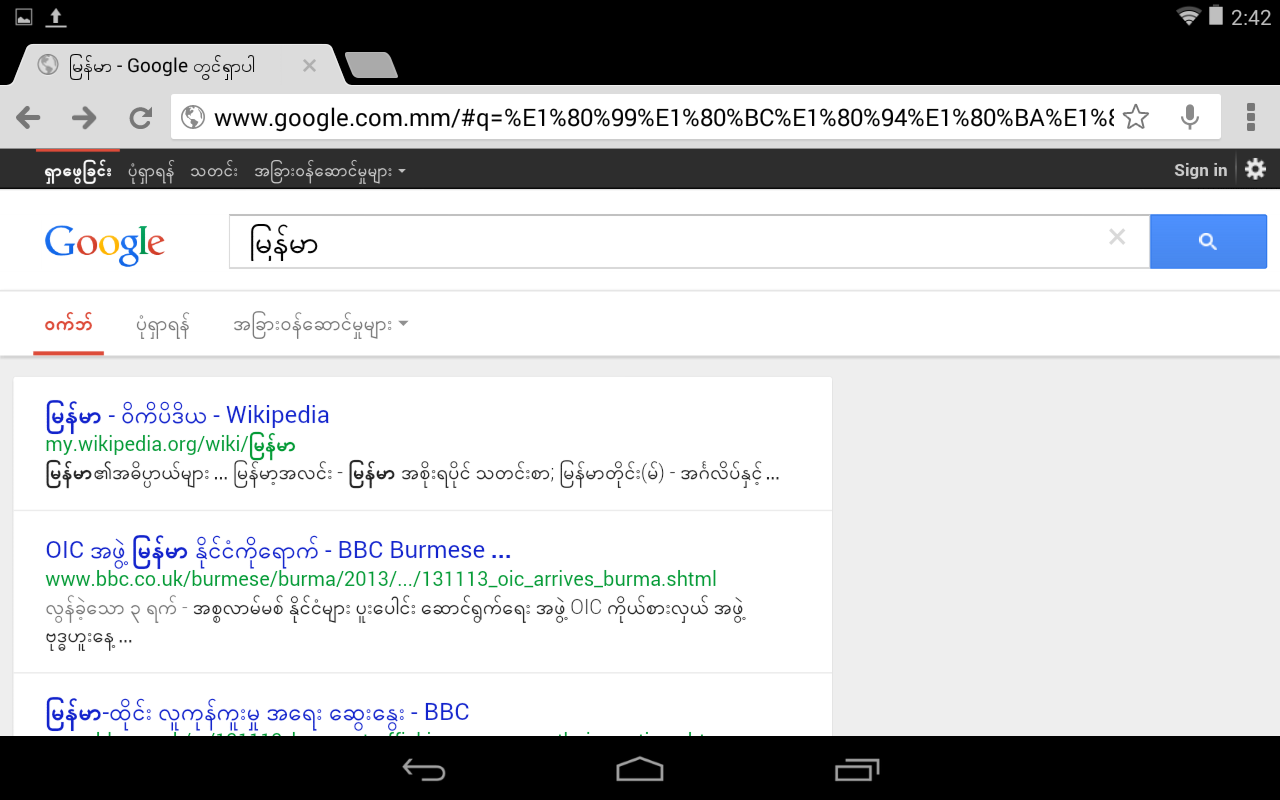 Now, if only there were some Burmese developers who could create a Burmese language keyboard for Android… I did spot some issues, namely with regard to proper line spacing of the characters to ensure the diacritics are fully displayed and not cut off. A screenshot of a Burmese Wikipedia article on the Chrome app below: 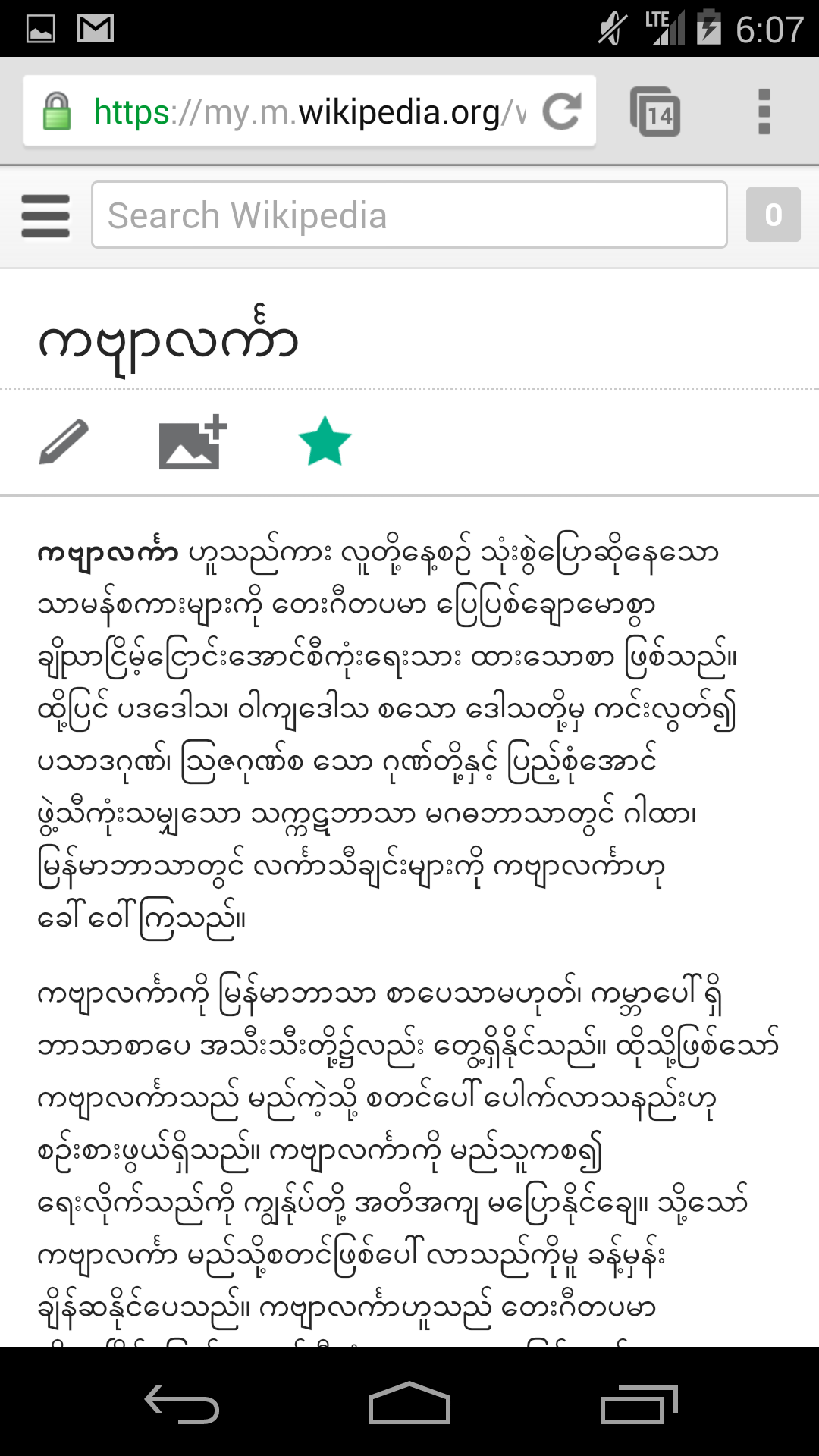 This should be exciting news in Burma, not least because Android smartphones dominate the the Burmese market, as with other emerging markets. And this should do some good in hastening the much-needed disappearance of Zawgyi font.

I went to the Android Developer website and confirmed that this wasn’t just a fluke: Unicode support for Burmese and even minority languages based on the Burmese script is all but complete! 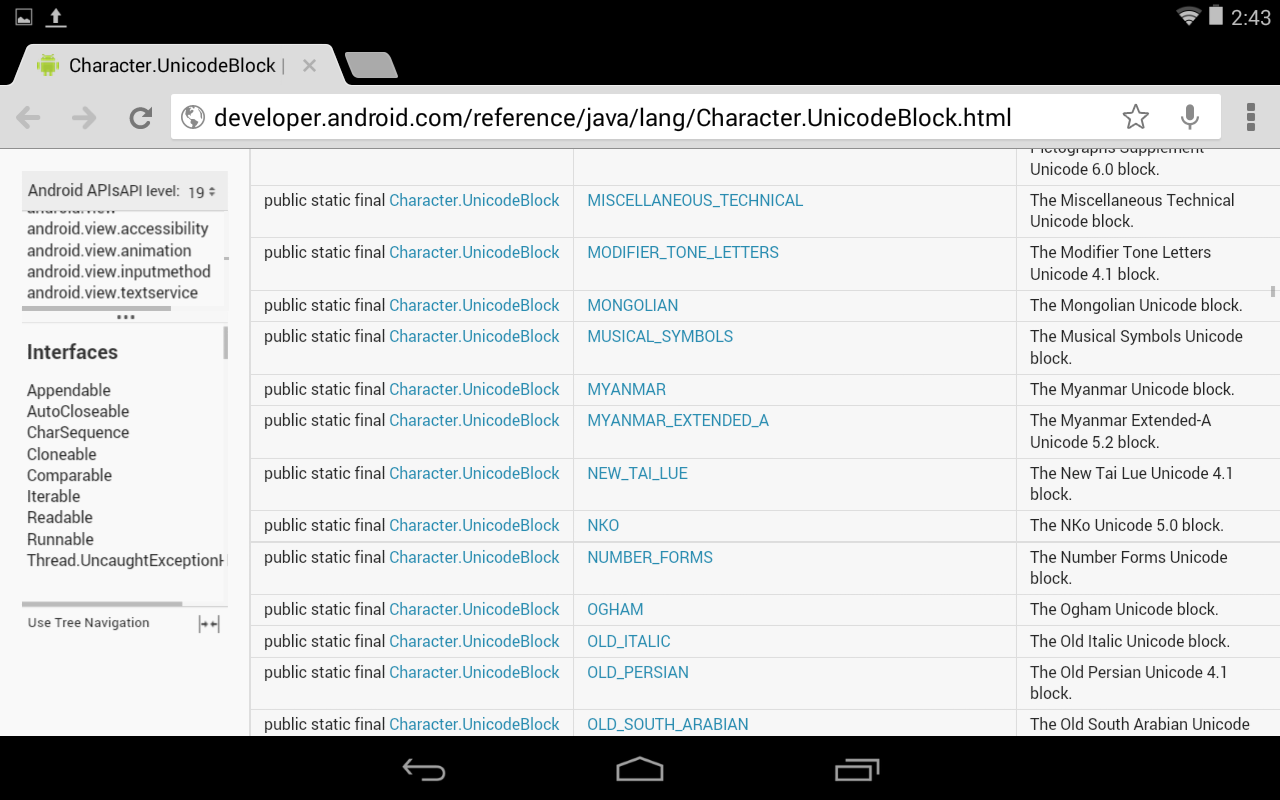 Now, if only usage of Unicode were more prevalent among the Burmese community… The Unicode block dedicated to Burmese has been around for several years, but among Burmese language websites, Zawgyi, a substandard Burmese font, still reigns as king. Zawgyi websites still outpace websites based on the Unicode standard, even though the major operating systems, namely Windows 8 (link) and OSX (link) now provide support for Burmese or Myanmar Unicode.

The Unicode block dedicated to Myanmar (Burmese) and related scripts (Mon, Karen, Kayah, Shan, and Palaung, as well as Pali and Sanskrit): 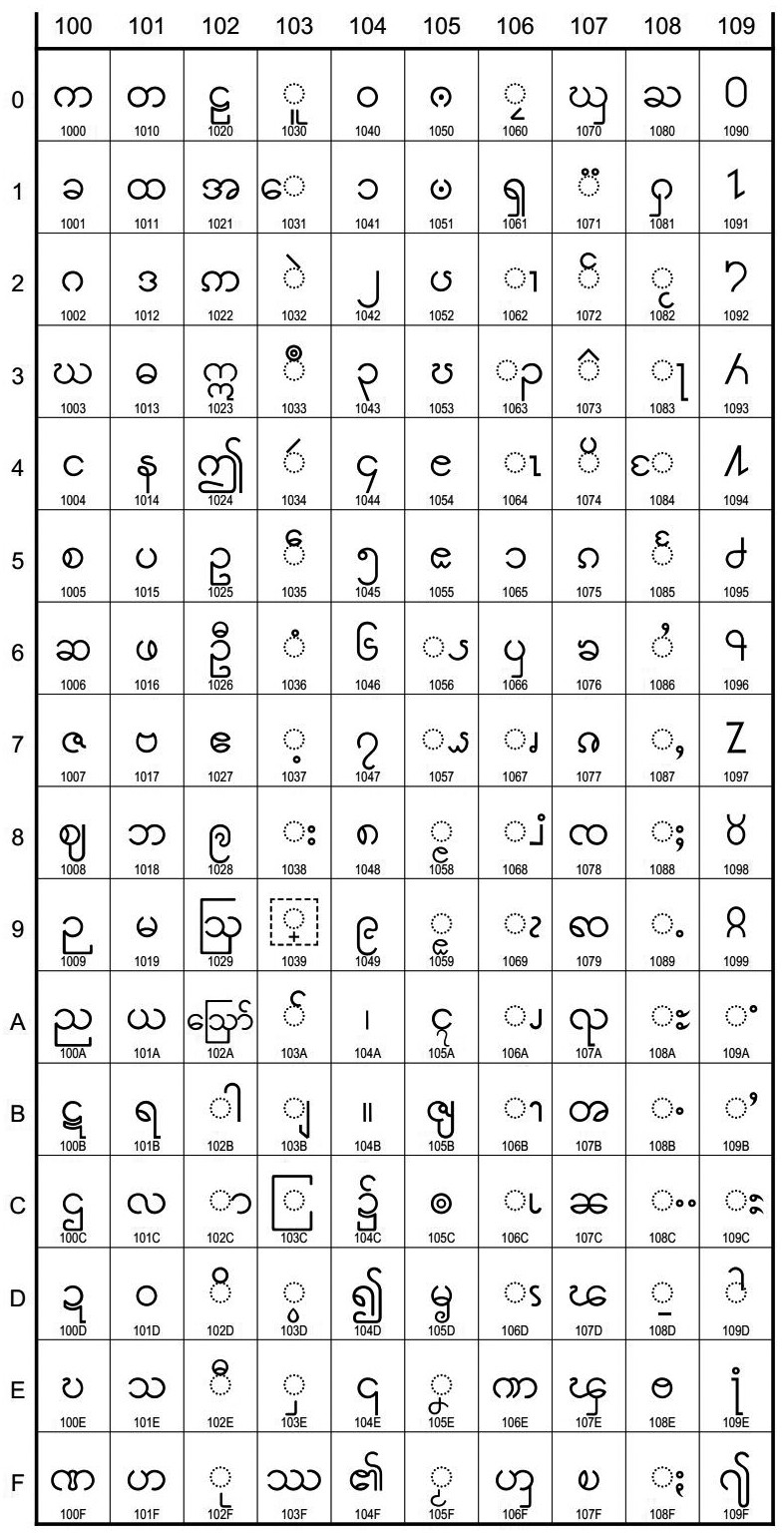 More information on Burmese and related Southeast Asian scripts can be found in The Unicode Standard (link).

The following are some reasons why Zawgyi is inefficient–

There was a place and a time for Zawgyi (Lionslayer provides a good background on Zawgyi), i.e., computers lacked support for complex Indic scripts, but that time is over. As major OS’es roll out support for this standard, it’s absolutely necessary that major Burmese language players begin to jump the bandwagon as well. But at the end of the day, it’s an issue of end user adoption. How do major players relay that message to the ordinary individual, when Zawgyi has been used as a crutch all these years? It’s definitely an uphill battle, especially with converting content from Zawgyi to Unicode and informing users. This link provides useful tools for anybody interested in getting started.

Out of curiosity, I conducted a fairly comprehensive survey of 40 Burmese government websites (using Google, primarily searching for websites in the .gov.mm domain) to see which ones have adopted Unicode and which ones are still using Zawgyi. I found that a promising 30% now use Unicode, but the plurality, 45%, use Zawgyi for their Burmese language sites. However, a startling 25% don’t even offer a Burmese version of their websites. I did notice a handful of websites that offer both Unicode and Zawgyi versions, a concession to users who have yet to make the switch. 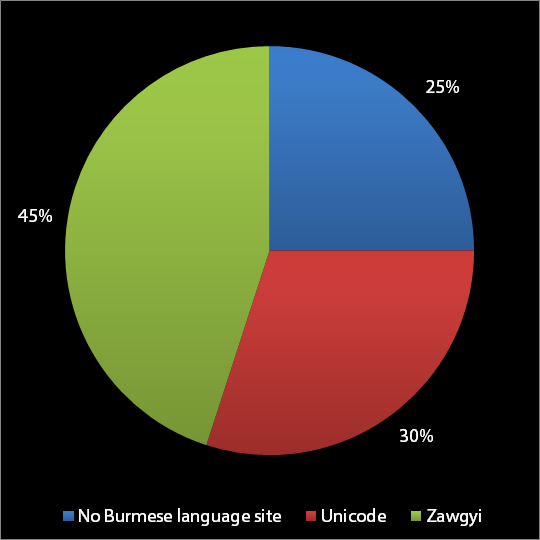 There should be a concerted effort by Burmese government agencies to all adopt the Unicode standard, especially while IT penetration is still in its nascency. As Burma’s population of internet and computer users grows, it will become more and more difficult for consolidation and adoption of the Unicode standard to occur. This is a perfect opportunity to steer Burmese language users in the right direction.

The official website of the Amyotha Hluttaw (Upper House of the Parliament) get an F – renders its Burmese text using Zawgyi, as exemplified by the butchered and corrupted text on my tablet: 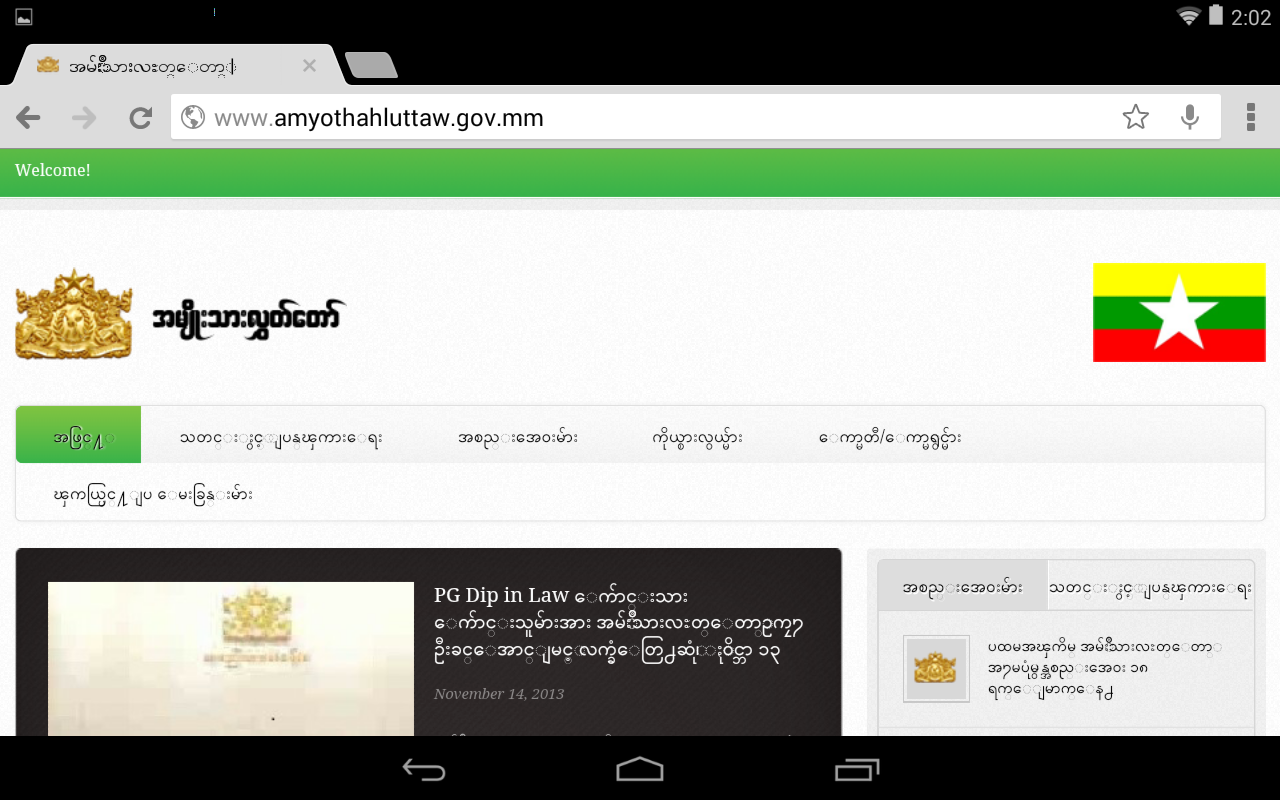 The Official Website of the President’s Office receives an A+: I noticed that the website does offer Zawgyi users an option, but the website is in full compliance. 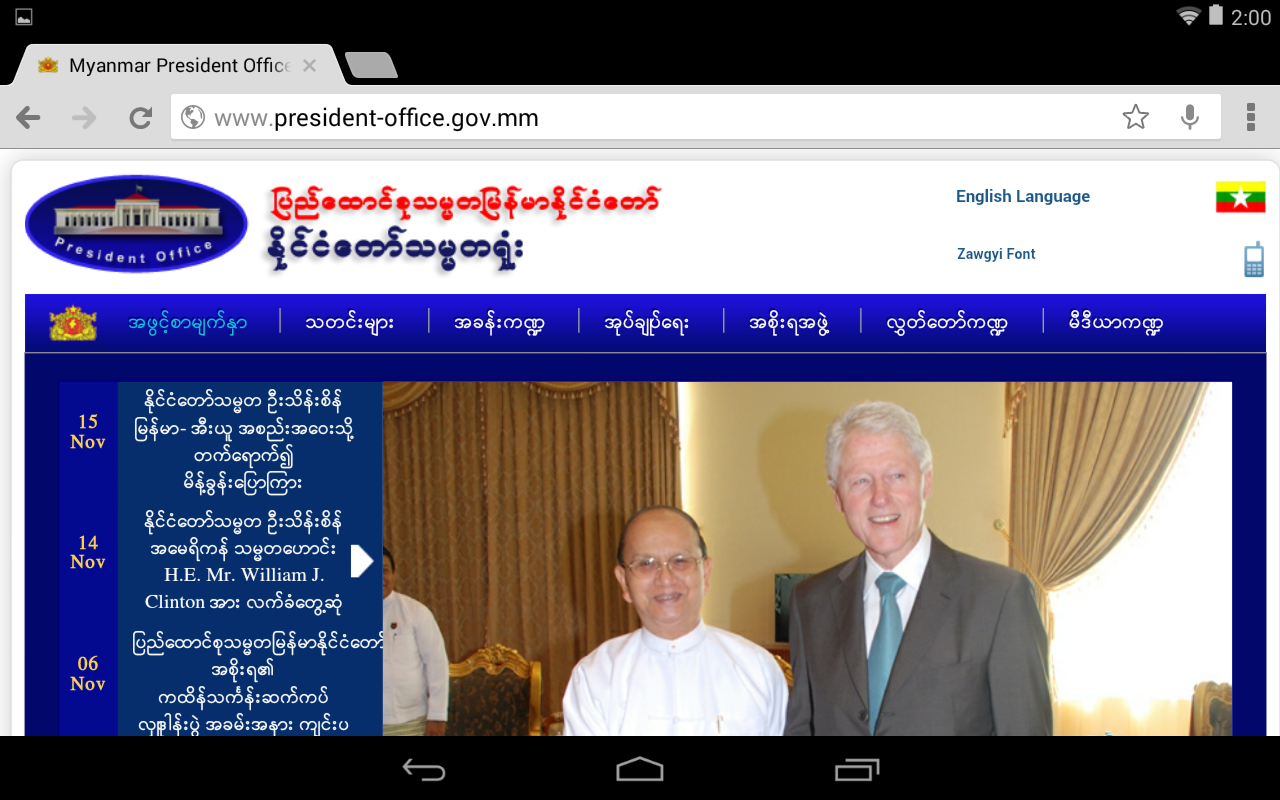 For the curious, inventory of surveyed websites:
40 (10 with no Burmese language site, 12 Unicode, 18 Zawgyi)

If any of you have any input or suggestions to make, leave a comment! I’m very eager to hear your thoughts on making the transition to Unicode smoother, or promoting greater usage of Unicode for Burmese.

15 thoughts on “The state of Burmese Unicode”