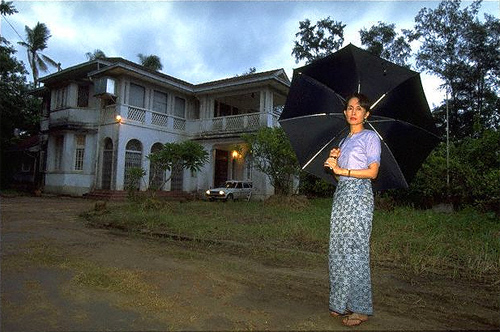 Aung San Suu Kyi at her family home in July 1995

As predicted, Aung San Suu Kyi’s house arrest term was extended one more year. According to the Wall Street Journal:

It mentioned how she may have been notified of the renewal:

The first sign of the extension came when a silver-gray Toyota with tinted windows was seen by neighbors entering Ms. Suu Kyi’s compound at 3:55 p.m. They were assumed to be government officials because she is allowed no visitors. They stayed for about 10 minutes.

Yet another year has gone by and no important developments in the area of Burmese democracy have emerged. Only more draconian rule spearheaded by the military which is fostering a pseudo-democracy in the making. Those who protested for Suu Kyi’s release have been arrested while others who have merely gone to places of worship in campaigns to release her have been physically assaulted by military personnel and USDA members. International pressure has not worked and neither have sanctions to change the situation in Burma. But what will?

I believe change has to come from the inside. Despite Aung San Suu Kyi’s status as an international icon of civil disobedience, she surely cannot be the only one who is working towards democratizing the country. There are thousands in Burma, former college students who yearn for the 8888 uprising’s purpose to come to life, retired military officers who realize what the military has done, and ordinary housewives who want to cook rice and not gruel, who work each day to try to change the situation. But all of their efforts are ultimately overshadowed and hindered, both by the lack of attention these efforts receive in the international community and by the military government’s restrictions.

We surely cannot expect Than Shwe and his cabinet to adapt or change by gently nudging them, when they can go elsewhere (in particular, neighboring countries and Asia) for military funding and money. And there would be no good reason for them to change. Why would they want to listen to the international community when they have been shunned and now defy them without much reluctance? World War II was sparked by the fear of ‘conflict’ and appeasement of the Axis powers. If the world just gently badgers the government in place, things will worsen.

Last week, The Myanmar Times had an article on a British parliament committee’s suggestion to reconsider using sanctions against Burma, a rare discussion in Burmese media. But this means nothing.

The government would restrict Aung San Suu Kyi’s as much as possible, naturally. She has star power, international legitimacy, a founding father of Burma as her father (Aung San), has a respectable background and is educated. It’s her education that the uneducated generals are fearful of. Everything is falling into place. Nowadays, educational opportunities only come by through the USDA (Union Solidarity and Development Organization, a military-formed civilian NGO) to ensure that the future generation of youth conforms to the current military ideology. According to a report on the USDA:

Many teenagers out of school fall into membership, as they see the opportunity to go to foreign countries as offering them a better life. Malaysia, in particular, has a contractual agreement with the USDA.

Aung San Suu Kyi’s continued house arrest only symbolizes the limits that people can go to revolutionize the system, a corrupt, unfair, and inhumane system that has ruled Burma for over four decades. And that system believes it knows better than the people on how to govern.

My grandfather often reminisces of the peaceful times during colonial rule, recalling the BBC radio broadcasts, government schools that taught English, and what he calls prosperous times. British rule has its own flaws, but one can only wonder. Would Burma be better off today if it had joined the Commonwealth? What if it delayed a move to independence? But for the time being, the Burmese people remain fettered in chains. I know I’m being cynical, but I know that nothing will change, at least in the near future, as do most Burmese people.

3 thoughts on “Another year fettered”