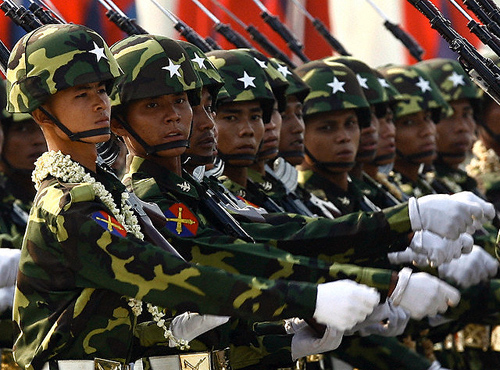 A Burmese vigilante militia named Pyithu Arr Shin was given a thumbs-up by the state media, for taking the law into its own hands and arresting Burmese civilians who were supposedly planning a prayer campaign to release Aung San Suu Kyi. According to the DVB (Democratic Voice of Burma),

The state-run New Light of Myanmar today said the arrests were made by “Peace-loving people” preventing “instigators from trying to cause instability and unrest.” The 88 Generation Students today described the arrests as highly manipulative.

An militia (which is illegal in essence) is allowed to operate freely while 24 civilian organizations (including Buddhist organizations, nonprofit hospitals and trade associations) will not have their registration licenses renewed (“Burmese military bans civil groups”). These include the Free Funeral Service Society, an organization that provides funerals to families who cannot afford funerals. These are obvious efforts in putting vital services that are covered by private services and organizations into the supranational and ultranationalistic Union Solidarity and Development Association (USDA), which is set to become the ‘civilian’ political party of the military officials once the Roadmap to Democracy is complete. The Myanmar Times heralded the opening of a free clinic in Rangoon’s Mayangone Township by the USDA. Nowadays, the USDA has a complete monopoly in access to employment in the civil service, scholarships, and education abroad.

In a week (May 27), Suu Kyi’s house arrest is set to expire. Perhaps these latest developments–the clamping down of NGOs and arrests–are a foreshadowing of what will unfold in the next week.