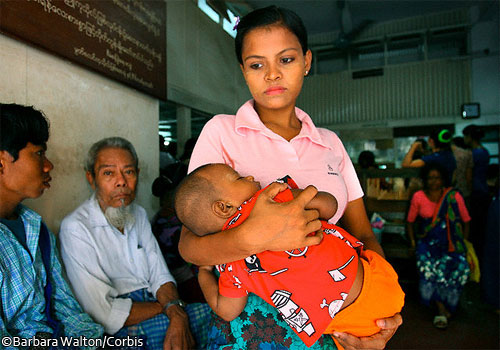 A Burmese woman holds her sick child waiting for a doctor a hospital in Rangoon.

According to various media sources including The Nation (“ICRC shuts down operation in Burma”), two Red Cross offices, in Moulmein (since renamed Mawlamyaing) and Kengtong (called Kyaingtong in Burmese) have been shut down due to government restrictions on Red Cross’ work programs (remaining open offices include those in Rangoon, Hpaan, Mandalay, and Taunggyi). Since last year, Red Cross has reduced the number of its expatriate staff from 56 to 16 due to government restrictions. This comes 4 months after the government allowed all Red Cross field offices in Burma to re-open after shutting them down in October 2006.

Interestingly enough, The Myanmar Times reported last year in “Red Cross TB program covers more ground” that Red Cross was going to expand the Tuberculosis Prevention and Control Program in the Rangoon area. This is unfortunate for those living with diseases like tuberculosis (92,429 according to StopTB), HIV/AIDS (330,000 according to UNAIDS) and malaria (716,100 according to WHO). Red Cross is not the first to halt programs in Burma. The Global Fund, an organization aimed at tackling AIDS, Tuberculosis and Malaria around the world, withdrew from Burma in 2005, terminating its grant of 98 million USD, after the Burmese government restricted staff travel.

Considering that Moulmein and Kengtong, located in Mon state and Shan state respectively are regions with some of the highest HIV infection rates in Burma, treatment for individuals with AIDS will become harder to access. But that is not all. Kengtong is a center of the United Wa State Army and drug trafficking and is strategically located near China, Laos, and Thailand.