Asia Times‘ Michael Vatikiotis wrote an article “The Case for Royalty in Myanmar”, arguing for a return to traditional monarchy in Burma, as in other democratic Southeast Asian countries, particularly Thailand, Cambodia, and Malaysia. The article states that restoring a monarchy would counter the supremacy of the military, achieve national unity, and ultimately bring social stability.

This is a very interesting scenario. Monarchy already seems to be in the process of replication by the ruling military regime, which moved Burma’s national capital from the colonial-established seaport of Rangoon to the middle of Burma, in Naypyidaw, which means “royal city”, an antiquated term used when the Burman monarchy ruled. (Until the government named its new capital “Naypyidaw”, the only other “Naypyidaw” I knew of was a movie theater in Rangoon.)

I searched “Naypyidaw” on Youtube, and found an interesting video that supposedly shows Than Shwe’s residence in Naypyidaw (the same person who uploaded 2 hours of the wedding of Than Shwe’s youngest daughter). I can’t verify this, but the background music, to Burmese speakers, is rather entertaining. I went to Google Earth to show the sheer size of Naypyidaw (the clearly visible white roads probably form the highway connecting the different parts of the capital). 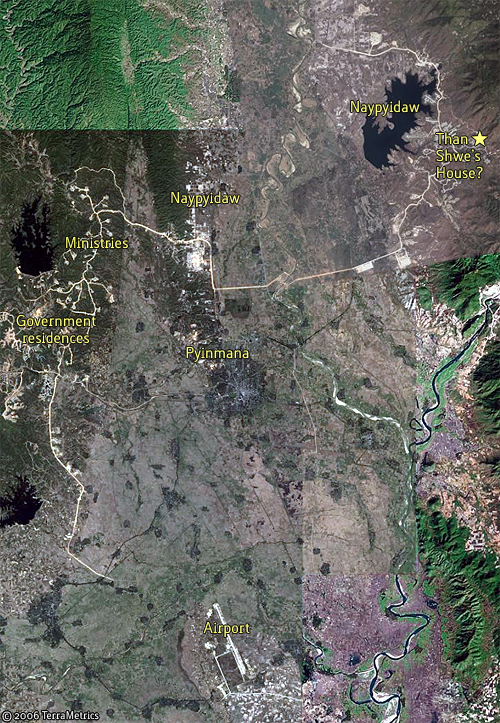 According to the Youtube video, Than Shwe’s residence is on the far northeast, sandwiched between the town of Yezin and hills. I’m not sure if this is really his residence, but while looking on Google Earth, this was the largest structure in Naypyidaw and had well-manicured lawns.

Now, returning back to reinstating monarchy in Burma, what I wrote above was just a rant. The current ruler, Than Shwe, nor other high-ranking members of the State Peace and Development Council (the official name of the government), is not well-received by his countrymen. Burma has not had a functioning monarchy for 2 centuries, unlike Thailand and Cambodia, which have had short interludes without a monarchy, and it would be hard to reintroduce this in Burma. Also, from which ethnic group would the monarchy be selected from? Burma is too racially diverse, with Burmans forming a slight majority (65%-68%) of the population. Unless a system like that of Malaysia, where the position of Malaysia’s Yang di-Pertuan Agong (Supreme Ruler) is rotated, is used, with different ethnic groups creating monarchies and rotating their honorary titles.

I believe the Burmese are exhausted from decades of dictatorship, and would shun monarchy at the present moment. Reintroducing monarchy is interesting but unfeasible. The structures of the Burman monarchy in place centuries ago are now gone. Likewise, it would require a stable democratic government with the trust of its people for the monarchy to be less of a threat in dominating power. It’s great that innovative ideas like these are appearing; maybe one may ultimately work.

7 thoughts on “Reinstate monarchy in Burma?”